Why The Cotswolds Is So Damn Popular At Christmas

It might not snow on command, but the picture perfect villages and abundant festive events will get the most Scrooge-like in the seasonal spirit. Here’s how to plan your weekend, from accommodation to Christmas Market dates and unusual things to do.

STAY AT:
The Bull Inn, Charlbury, Cotswold
www.bullinn-charlbury.com
Of all the swanky pubs and hotels in the Cotswolds, our favourite is The Bull Inn in Charlbury. It wasn’t easy choosing. There’s a plethora of top notch places nearby, from Carole Bamford’s pub The Wild Rabbit to the cripplingly trendy Soho Farmhouse and also the King’s Head in Bledington where the Duke and Duchess of Cambridge like to lunch. But of all these swanky haunts, we most like to take refuge in The Bull Inn in Charlbury. 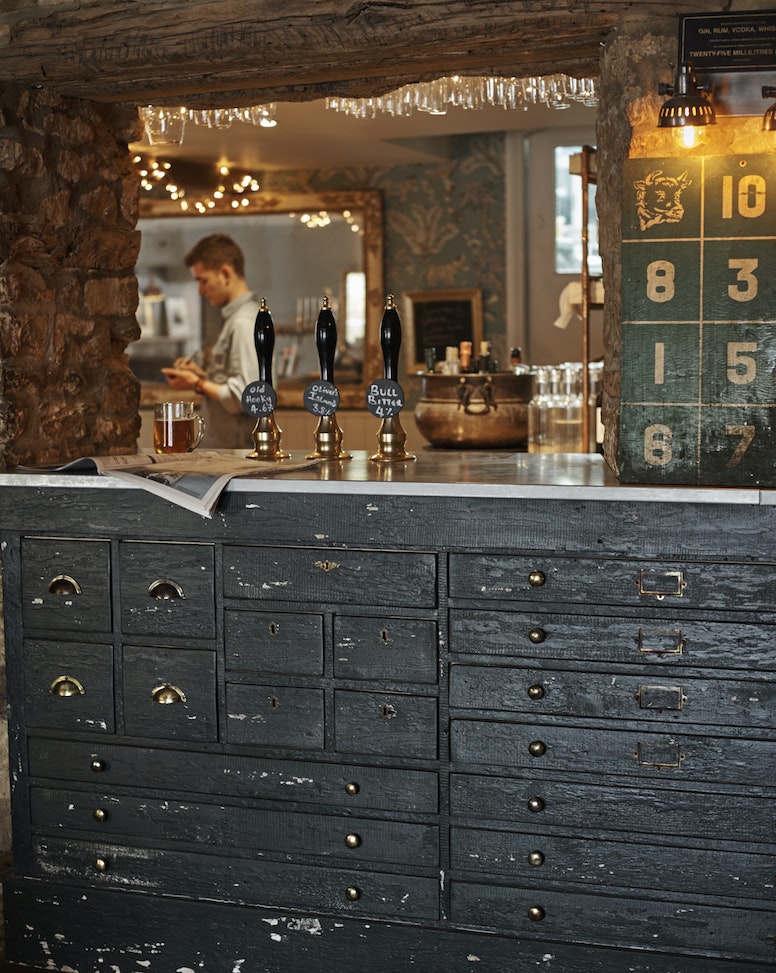 So, why the fuss? The Bull Inn is a small newly revamped pub, cosy and chic in equal measure, that has eight bedrooms. Whilst being pimped to perfection, the former 16th-century coaching inn has retained plenty of period features. There’s the inglenook fireplace, exposed-stone walls and beams and a very windy stone staircase.

It’s both informal in its charm – there’s copious armchairs covered in kilim-patterned cushions and ikat upholstery – while formal in its immaculate interiors and wood paneled walls. The wallpapers make for an Instagram dream; pretty and bold prints by block-printing textile designer Molly Mahon and Thibaut. 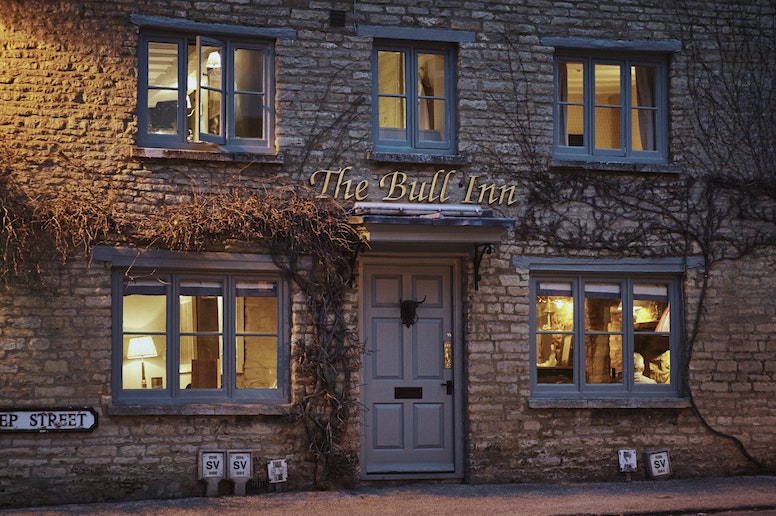 What’s its story? The Bull Inn was the first joint venture run by Charlie and Willow Crossley; they’ve since opened up The Swan Inn at nearby Ascott-under-Whychwood. Charlie used to run the Hollywood Arms in Chelsea, London. Willow, who has a background in fashion journalism, is a floral artist and author making quite the name for herself in trendy interior circles. Together, the couple gave The Bull a rural-chic makeover transforming it from an average British pub with swirly, soggy carpets into a chichi destination pub frequented by the likes of Cara and Poppy Delevingne. Once an under-loved local, the Bull now has a modern, arty vibe. The menu offers wholesome food and not at silly prices.

Charlbury is a sleepy kind of pretty Cotswolds town, and the Bull is something of a landmark building in its centre. If you make this your base for a Christmas stay, do wrap up and visit the local Christmas markets and events:

Bourton-on-the-Water – There will be a lights-on extravaganza on Friday 1 December when many shops will stay open until late. Last year, they had a Christmas tree floating in the river.

Broadway – This picture perfect Cotswold village will be open for late night shopping on Friday 24 November and Friday 1 December. Get in the mood with carol singers and festive street entertainers.

Cheltenham – This well-known Christmas Market is running from Thursday 23 November to Saturday 16 December. There will be 40 stalls flogging unusual food and drink alongside homemade treasures and great gifts.

Chipping Campden - Tourists eat your heart out. This ridiculously charming town opens its Christmas Market on Saturday 2 December. The tree will be lit at 430pm and the town’s lights soon after.

Chipping Norton – The talk is that this year’s festivities will be bigger and better than ever before.

Cirencester – Cirencester is one of the oldest cities in the country, dating back to Roman origin. As of Saturday 2 December, it will be hosting the annual Sparkles Advent Festival and Market.

Evesham – On Saturday 25 November, Christmas cheer will abound in Evesham. From noon, the carols and live music will keep the market noisy and at 3pm, Father Christmas will arrive with his reindeer.

Moreton-in-Marsh – The Christmas Market is on Saturday 25 November.

Kingham – Head to the town’s village hall on Sunday 23 December to browse the gifts and floral displays at this Christmas Market.

Stow-on-the-Wold – One to remember, the much-anticipated Christmas Tree Festival runs from Thursday 7 December to Sunday 10 December at St Edward’s Church.

FANCY SOMETHING A BIT DIFFERENT?

Westonbirt Arboretum
www.forestry.gov.uk/westonbirt
Walk the one-mile illuminated trail admiring the lit up trees of this special arboretum. Father Christmas, and his wife for that matter, will be around to tell seasonal stories and hand out gifts. The evenings run on 1, 2, 3, 7, 8, 9, 10, 14, 15, 16, and 17th December.

Blenheim Palace
www.blenheimpalace.com
The formal gardens on the estate become a winter wonderland of illuminations from 24 November to 1 January. The lake will be glowing with brightly-lit boats and dancing fountain jets. A sight to see.

Sudeley Castle
www.sudeleycastle.co.uk
The castle and grounds have been closed until the Spectacle of Light which will run from 8-30 December on selected nights.

Santa Special Trains
https://www.gwsr.com/
Hop on a steam train at Cheltenham Racecourse Station and travel to Winchcombe through the long tunnel and visit Santa and his elves in his grotto.