Satisfy your thirst for sparkling water with these sleek at-home contraptions.

There is, undoubtedly, more of a sense of occasion to it than tap water, yet with none of the nasty additives you find in most soft drinks. On the rocks, straight-up or served with a slice, sparkling water is enjoying a spectacular rise in popularity.

Forbes magazine says: ‘The market for sparkling water is set to continue its strong growth in the next few years, driven by the introduction of new and innovative flavours, as well as its image as a healthy alternative to carbonated drinks.’

But most avid drinkers of sparkling water are increasingly uncomfortable about the number of single-use plastic bottles they get through. According to The Independent: ‘The amount of bottled water sold in the UK has doubled in the past fifteen years and continues to rise, with the average adult going through 150 plastic water bottles a year. It is estimated that by 2050 there will be 12 billion tons of plastic polluting the natural environment.’

The answer, surely, is to invest in your own sparkling water maker. Founded 117 years ago, Sodastream may have cornered the market and be the brand we all recognise – but others are following in its footsteps.

Here, we select the sleekest and chicest carbonated water makers out there now. 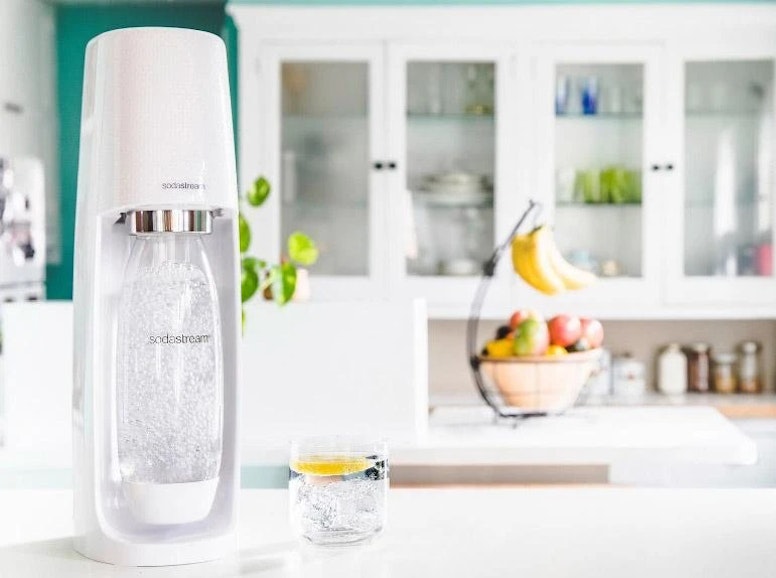 Over 40 million people around the world carbonate their own water with one of SodaStream’s three attractive designs. The machines, available in a choice of colourways, were created in England in 1903 but enjoyed something of a heyday in the 1970s, when their famous advertising slogan went: ‘Get busy with the fizzy’. In 2018, PepsiCo bought SodaStream – the world’s leading manufacturer of home sparkling drink makers – for $3.2billion. One reusable SodaStream carbonating bottle can save up to 1,282 single use plastic bottles per year. Pretty compelling stuff, right?

This beautiful item is truly the Rolls Royce of fizzy water machines. Like so many exquisitely designed things, the Aarke Carbonator II hails from Sweden. The company’s founders are two industrial designers whose objective it is to design, produce and sell premium household appliances, which is, they believe, a category forgotten by the design community. The word ‘aarke’ means ‘everyday’ in Southern Sami, a language spoken by just 500 people in the north of Sweden. Available in smart steel, brass, white, black and copper finishes, the Aarke Carbonator II is the world’s first sparkling water maker designed with a complete stainless steel enclosure. There is no plastic to be seen anywhere. Writing in New York magazine, one reviewer said: ‘Even though it is more than twice as expensive as the basic SodaStream, I’d say the Swedish-designed Aarke is worth the splurge, since it’s easier to use and looks nicer than the average, plastic soda machine.’ 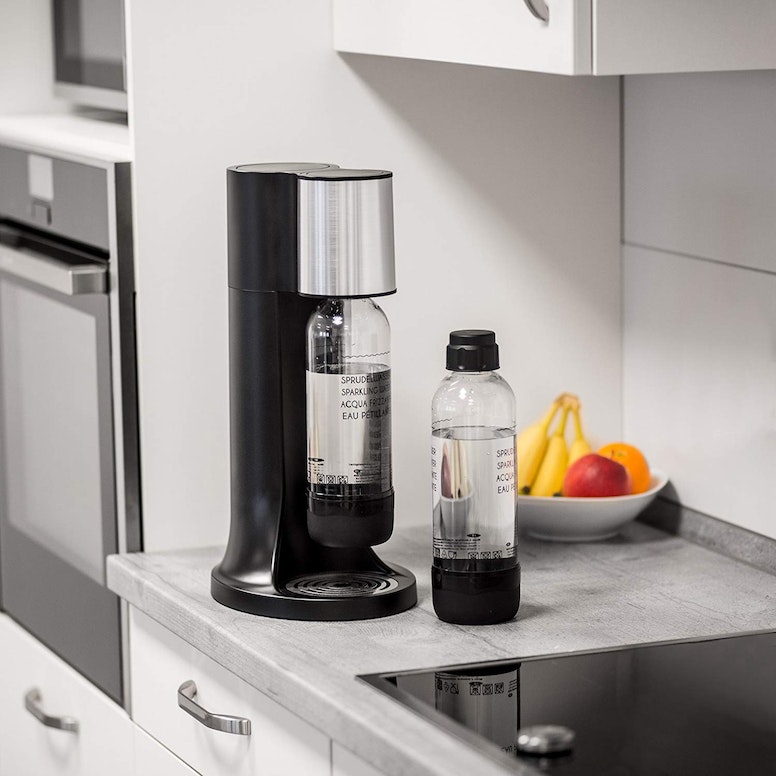 Levivo makes products for the kitchen and wider household, which it sells exclusively through Amazon. Its neat water carbonator is well reviewed, reasonably priced and comes in red, white, black and even rose gold, which gives it extra points for elegance. 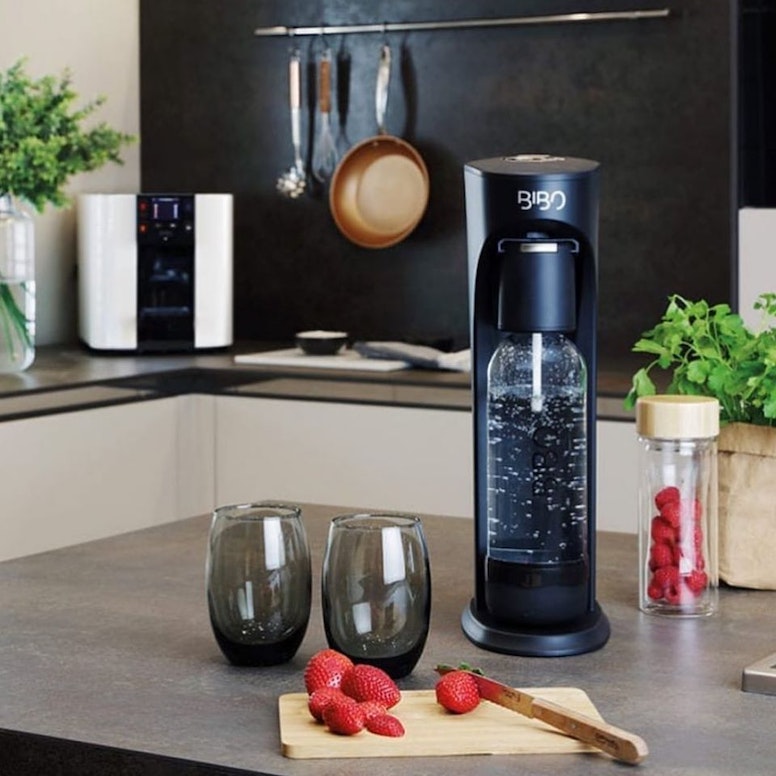 Finalists in last year’s West Oxfordshire Business Awards, Bibo is a home-grown company that is committed to creating sustainable lifestyles for UK homes and businesses. Its young and passionate team says: ‘BIBO was inspired by a deep desire to develop an affordable, efficient and attractive countertop filtered water dispenser that would not only dispense delicious tasting water, but would do so in a manner that has minimal environmental impact. BIBO is the new age of water filtration summed up in one stunning and sophisticated appliance that supplies the most refreshing and pure water.’ Its sparkling water maker, the BIBO Fizz, looks great and has four carbonation levels, so you can choose just how fizzy to make your fizz. 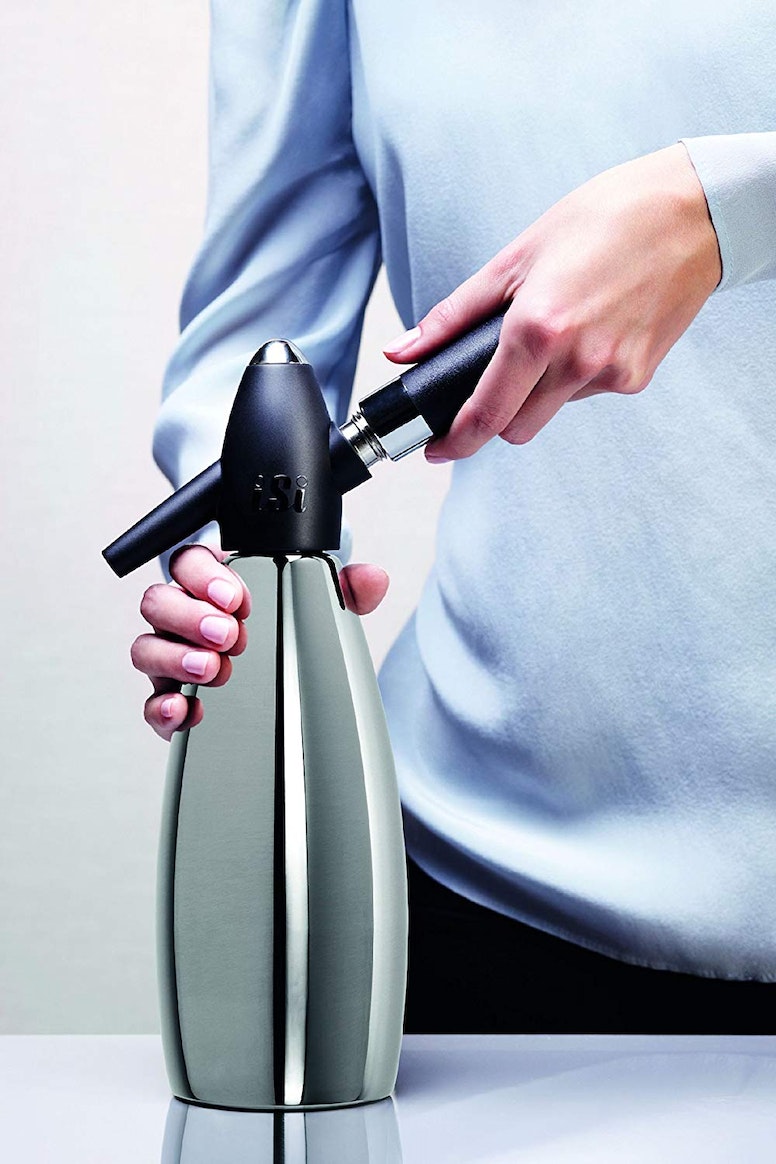 Not keen on cluttering the kitchen with another counter-top gadget? Try an old-fashioned soda siphon instead. This cool contraption – from the Austrian company that has been producing soda machines since the early 19th-century – will inject fizz into your water and glamour into drinks time. Keep it beside your cocktail shaker and pretend you live as glamorously as Jay Gatsby.

As any amateur mixologist knows, a good bartender needs the right kit to look the part. These sets and tools will raise your Negroni game instantly.

8 Of The Best Celebrity Wines To Try

Which bottles are worth their glamorous hype?

Is it ever OK to use a plastic bottle these days? The app finding local businesses that happily refill your bottle (for free).

How To Holiday in the UK’s Beautiful National Parks

Want to get away from the crowds this summer? Annabelle Thorpe, of 101 UK Holidays recommends heading to the UK's National Parks. 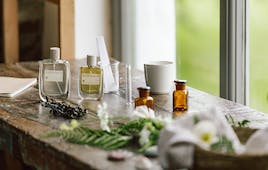 10 Ethical Brands To Watch This Winter 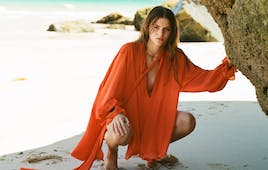 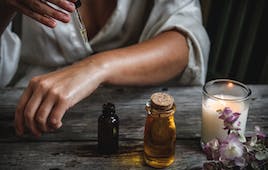 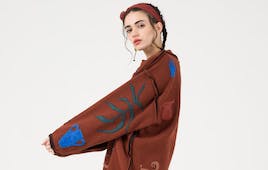 Do You Know About Regenerative Fashion Yet?