Five of The Best Dad Blogs

Now then, if the very idea of a dad blog makes you queasy, we urge you to stick with us.

Sure, there is some smug dross out there but times are changing and so is the parenthood blogosphere. With all of their wit and wisdom, it is only right that men should be part of the conversation. This Father’s Day, let’s hear it for the dad bloggers, an increasingly powerful voice on the internet.

Here, we present five of the least cringey, most refreshing and funniest dad blogs around.

Diary of the Dad
Tom Briggs has been blogging about his musings on parenting since the first of his three children was born in 2010. The award-winning blog started as a hobby and is now his full-time job. Tom, whose background is in journalism, is often to be seen on TV or heard on the radio discussing modern fatherhood. Diary of the Dad’s wry, self-deprecating style, useful reviews and clean aesthetic make it a pleasure to read.

A Day in the Life Dad
From the Berkshire home that he shares with his wife, dog and two children, Jamie Day is a freelance writer, social media expert and award-winning blogger. His A Day in the Life Dad won Best Baby Blog at the MAD Blog Awards in 2016. He says: “My tales embody joy and the occasional woe, inspired by the cocktail of children, dogs, my wife and our lifestyle – a glimpse into a day in the life of a modern-day dad.”

You the Daddy
Father of one, Giles Alexander, has a full-time job in the City and writes You the Daddy in his spare time. Giving the guy’s perspective on parenthood, pregnancy and everything in between, this blog is properly funny. It’s worth a look for the “30 GIFS that perfectly sum up the first year of parenthood” post alone.

Dad or Alive
US blogger Adrian Kulp is, in his own words, an “unexpected, full-time, stay-at-home dad”. He has three children and a baby on the way. A former TV executive, Adrian worked for Adam Sandler for seven years and Chelsea Handler for one – so it comes as no surprise that his blog is hilarious. His spin-off books include Dad or Alive and We’re Pregnant: The First-Time Dad’s Pregnancy Handbook.

The FMLY Man
Brought to us last year by the cool chicks at the Selfish Mother (selfishmother.com) blogzine, The FMLY Man is a similar, slick space for dads to share whatever they’re feeling about life, work and kids. They say: “Fatherhood is changing! There isn’t a stereotypical dad mould these days. All dads are different and have a unique voice. Parenthood can be a mind boggling place – and it’s healthy to share.”

Dave Cameron got the Father’s Day dream: if you want it too, see our top five sites for the must-have room with a view. 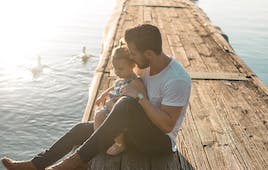 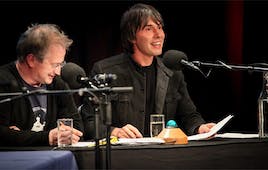