The gamine actress and humanitarian was always mesmerising on screen. Here are her greatest moments.

She started out as a ballet dancer, became an Oscar-winning actress and ended up a lauded UNICEF Goodwill Ambassador. There is a lot to love about Audrey Hepburn.

In 1954, which was the year she got her Academy Award for Roman Holiday, the fashion photographer Cecil Beaton declared in Vogue that Hepburn was the “public embodiment of our new feminine ideal”. Capri pants, elfin hairstyles and thick eyebrows were on the map.

Following the success of Roman Holiday, Audrey Hepburn went on to make some of our most loved films, including Sabrina, Funny Face, The Nun’s Story – and, of course, Breakfast at Tiffany’s and My Fair Lady.

She became lifelong friends with, and the muse of, the French fashion designer Hubert de Givenchy after he dressed her for Sabrina. The aesthetic of the duo was so influential, one academic once said: ‘We might ask ‘Did Audrey Hepburn create Givenchy or was it the other way around?’’

Born in Belgium in 1929, Hepburn lived a rich and successful life in London, Europe and the US before she died, aged 63, at home in Switzerland in 1993.

In addition to being a captivating actress, a perfect clotheshorse and a passionate advocate of human rights, she was a doting mother to her two sons. Here, we revisit Hepburn’s greatest recorded moments.


If Roman Holiday introduced Hepburn to the world, this screen test secured her place on the film. It is gripping to watch the exquisite ingénue on the precipice of stardom. The producers had wanted to cast Elizabeth Taylor in the role but when the director, William Wyler, saw this test, Hepburn was a shoo in.

Winning The Oscar For Best Actress, 1954


By the time she came to film Roman Holiday, Audrey had only played a few small parts in a handful of movies. Co-star Gregory Peck knew she would be a hit. He couldn’t have been more right, given that she won an Oscar for her role. But, at that point, as we see in this clip, she was sweet and overcome by the glamour of Old Hollywood. Enormous eyelashes dwarfed her face. Her waist seemed impossibly small in her full-skirted frock. She turned left to pick up her award, when she should have turned right. She is even said to have left the Oscar in the loo later that night – but was reunited with it before too long.

Charity Premiere Of Breakfast At Tiffany’s In London, 1961


Here we witness this megastar of the silver screen explaining with the utmost charm and a volley of mesmerising smiles – during an interview to publicize Breakfast at Tiffany’s – that she is only in town for the night because she cannot leave her young son for longer. Brava!


Hepburn had been out of the US for 18 months before this interview took place in connection with the release of My Fair Lady. She reveals herself here to be thoughtful and feisty. Graciously defiant, she refuses to indulge her pushy interviewer. She remains throughout this four-minute clip utterly unflustered, diplomatic and loyal to her European roots.


If even Audrey Hepburn is riddled with self-doubt, what hope is there for the rest of us? Such is the question posed by this enchanting clip. Gracefully, Hepburn takes us through her lifelong body issues. She may always have had a dancer’s stunning poise but Hepburn always had complexes, too: she felt too tall, she felt her feet were too big, she wanted to have more shape.

Interview On The Phil Donahue Show, 1990


Here, a frail but ever elegant Hepburn, recalls her childhood in Holland during the war. She saw horrific things, lost relatives to the Nazis and had ‘many’ moments when she didn’t know whether there would be food for her family in the morning. She was brought up very strictly and thinks the departure of her father (her parents divorced before the war) left her insecure ‘for life, perhaps’. But she also gives us the glorious benefit of her quick wit here, teasing Donahue and engaging frequently with the audience.


This interview, filmed in the grounds of Hepburn’s beautiful, shuttered home in Switzerland, is poignant because it was her last. As her dogs play amid the lush, manicured flowerbeds, she shows us once again that, though she may have had Hollywood in the palm of her hand, she was pretty down to earth. Explaining why she made relatively few films in her lifetime, she says: ‘I never quite understood how you could be a good wife and be gone all the time making a movie … any the less than I could understand how you could be a mother … Who can tell what a good mother is? But I was there.’ 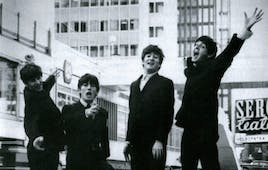