Keep you mind stimulated by touring world-class museums and galleries from your sofa.

Last week we brought you theatre you needn’t miss out on because of lockdown. Now, we round up a handful of the many world-class galleries and museums opening up their virtual doors to everyone, free of charge, so that we may peruse their collections online.

No, nothing will ever be exactly the same as seeing these works and artefacts in person, but it will nonetheless keep the cultural wolf from the door; enrich our understanding of art history (and, indeed, general history); and act as a preview so that we may select our highlights for visiting in person when the doors re-open, as one day they shall.

Until that yearned-for day, here are some of our favourites to tour at leisure online. 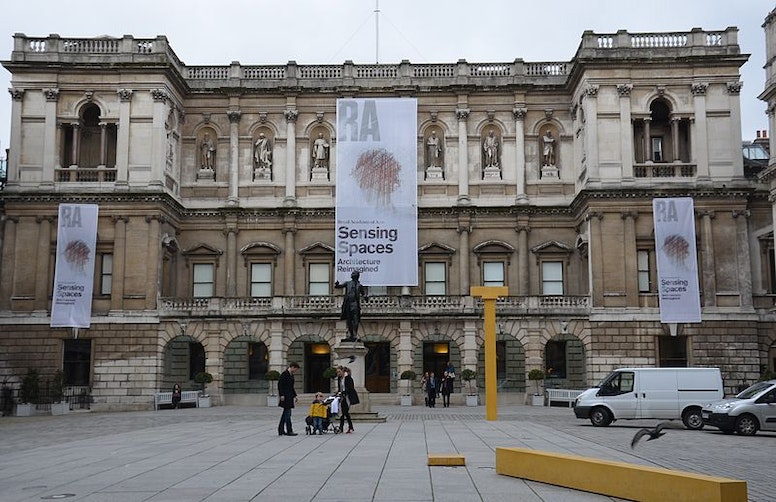 Unlike many in this list, The Royal Academy of Art isn’t so much offering whole gallery tours as delivering weekly shots of inspiration to those who sign up for its newsletter, as we strongly advise you do. In its first, it kicks off with a brilliant virtual tour of the current Léon Spilliaert show, complete with lingering shots of the written introductions to each room and atmospheric music – all minus the usual throngs. There is also art-inspired mindfulness (simply click through to a breathing exercise on its Insta page, this week using the painting Light Airs off the Needles by Julius Olsson RA as inspiration). In the newsletter too is a podcast pick, and a daily doodle challenge. Like the sound of the latter? Don’t neglect to click onto its family page where you can sign up to a bi-weekly newsletter containing art activities for kids. What was that you were saying about feeling bored? 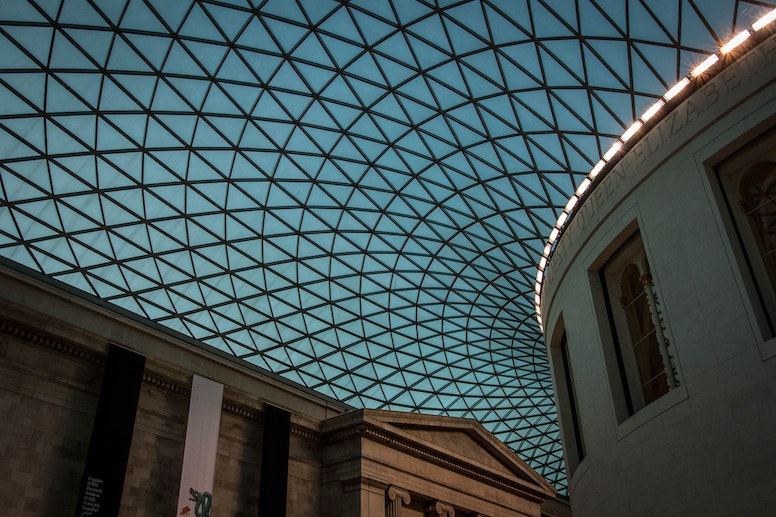 The British Museum is famously vast. Its treasures hail from across the world, from Egypt and Sudan to Greece and Rome; Britain and Europe to Asia, Africa, and then beyond to Oceania and the Americas. Under its roof, complete with Norman Foster-designed extension, are no fewer than eight million artefacts. On our visits we only ever skim the surface. Online, you can delve deeper and pause awhile to consider items and works you’re likely to have missed in person. Sure, maybe not all eight million, but if you have new-found time on your hands, why not make a jolly good stab at it? 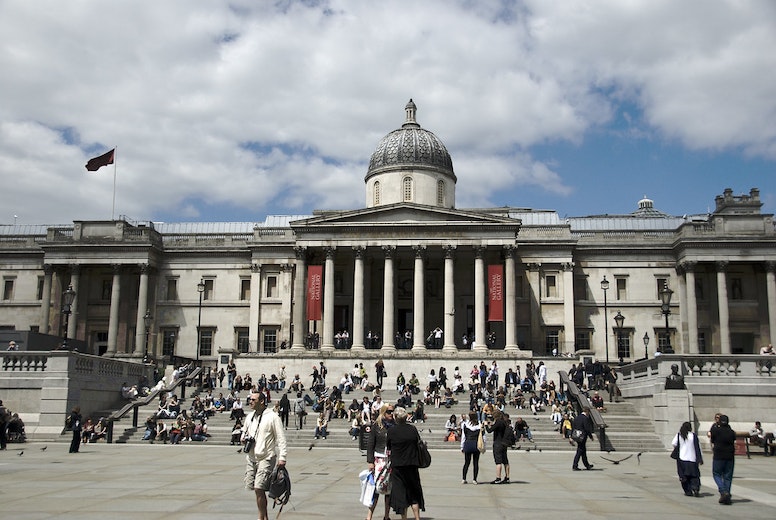 Who hasn’t dreamt of wandering the hallowed halls of The National Gallery alone? Well now you can. There is a Google Street View tour you can take, but we’d recommend going for the gallery’s own show-round, which allows you to click on each work of art as you go, bringing up information on each painting and its artist. Want to spend hours gazing at Whistlejacket in situ? Imagining yourself at Caravaggio’s The Supper at Emmaus, or feeling heroic thanks to Titian’s Bacchus and Ariadne? Feel like transporting yourself to rural Suffolk via Constable’s The Hay Wain or bobbing down the Grand Canal in a Canaletto? Want to spend a lazy day with the Bathers at La Grenouillère courtesy of Monet, or indeed doing the same with Cezanne’s Bathers? You can do all that here – frankly, who doesn’t need a dose of inspiration right now? We could spend days here. 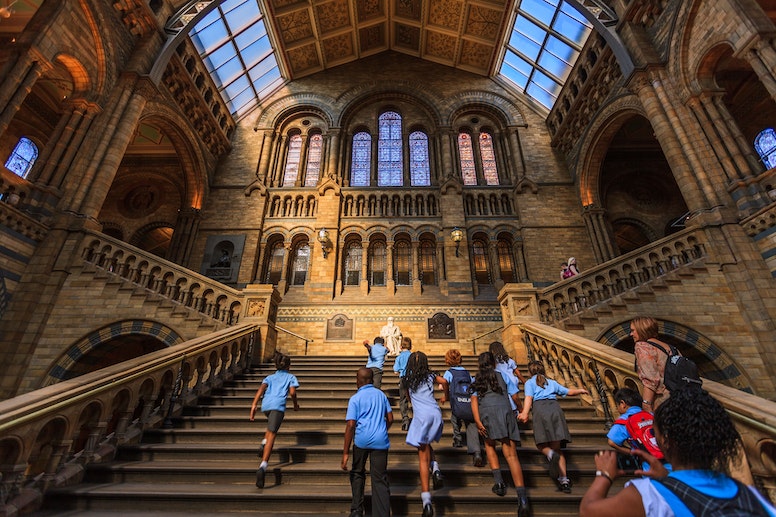 The Natural History Museum is, for so many of us, redolent of our childhoods, as well as now, of course, those of our own children. Who could forget the awe inspired by seeing the enormous hanging blue whale? Or marvelling at the T-Rex (which, in those days, was rather less high-tech, than the animatronic terror in situ now). There are, in short, hours of delight to be had here for budding palaeontologists. Although this Google Arts and Culture Tour can be a little clunky, it will keep dino-enthusiasts enthralled which, while navigating these long days, is the only thing we really care about. 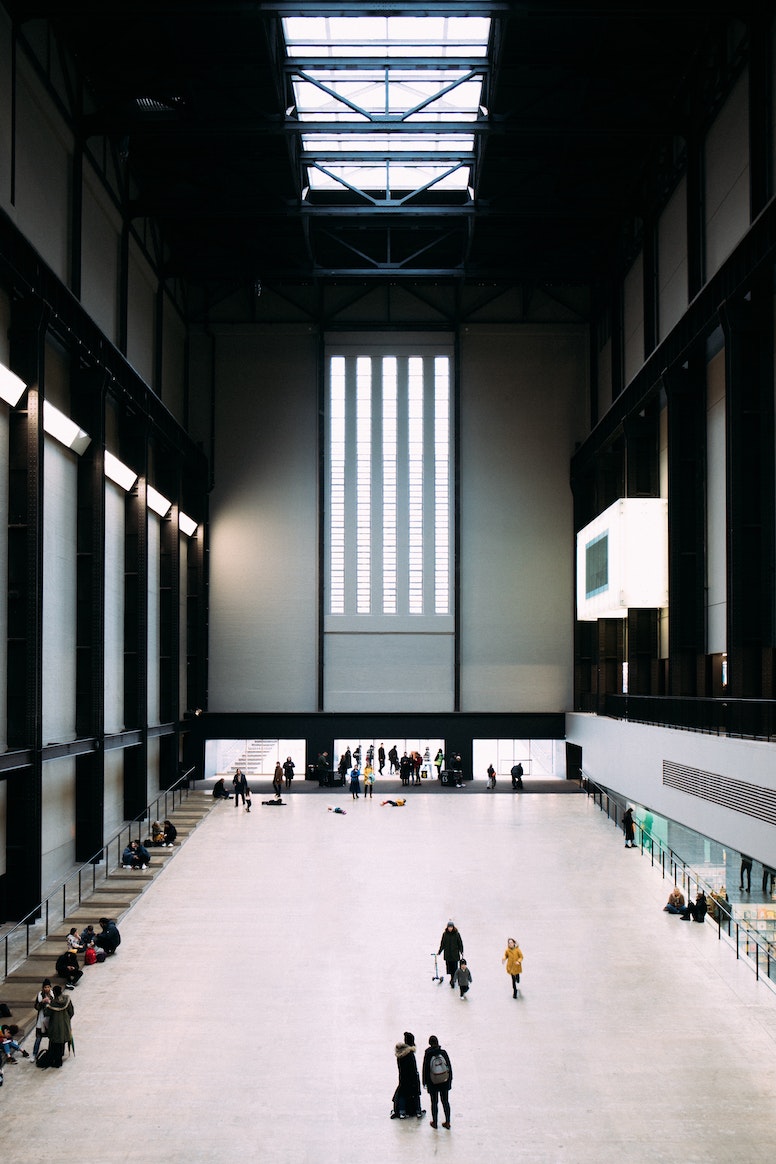 As with the Natural History Museum, you can take a Google Arts and Culture Tour of Tate Modern, the Herzog and de Meuron-converted power station turned temple to contemporary art, and it certainly is worth a virtual wander to explore the extraordinary spaces alone. But don’t forget, the gallery remains something of a powerhouse, albeit these days of blockbuster exhibitions. Whilst these may be on hold for the time being, it is still offering online shows. You can explore, for example, 60 years of work by the American artist, Ed Ruscha, or engage with Living Cities, a collection of artists’ responses to the built environment. Sure, you can’t feel tiny and awed in the Turbine Hall for now, but there’s still plenty to inspire. 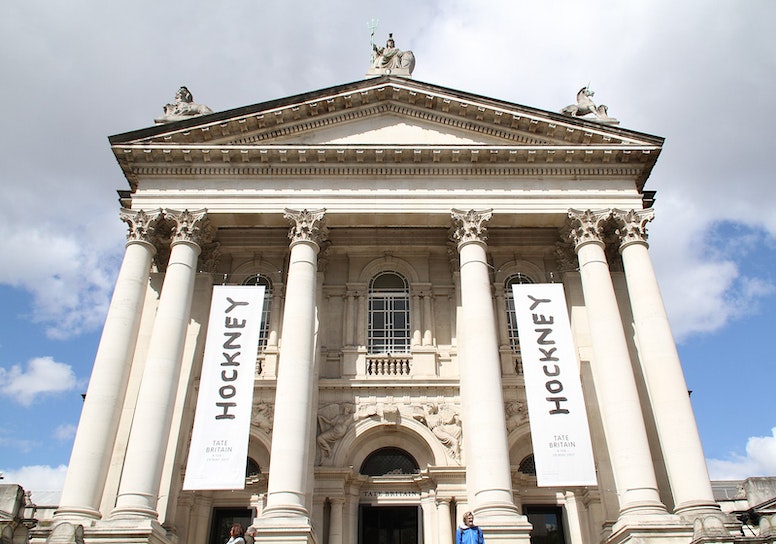 Just a short boat ride west down the Thames from Tate Modern brings you to the original: Tate Britain. We may have to wait a while until we can hop on the Tate-to-Tate boat (one of those things we always say we’ll do, never get round to, but now vow to absolutely try after lockdown), but you can still clap eyes on much of its beautiful collection. Take a virtual Walk Through British Art, which guides you through twelve astonishingly varied rooms in the gallery, all in chronological order. Start in 1540 with works from the likes of Nathanial Bacon and wander right up to 1960, where you’ll meet Peter Blake. Highlights en route include John Singer Sargeant’s Carnation, Lily, Lily, Rose and John Constable’s Flatford Mill. Pure joy for art lovers and those wishing to use the time to brush up their art history alike. 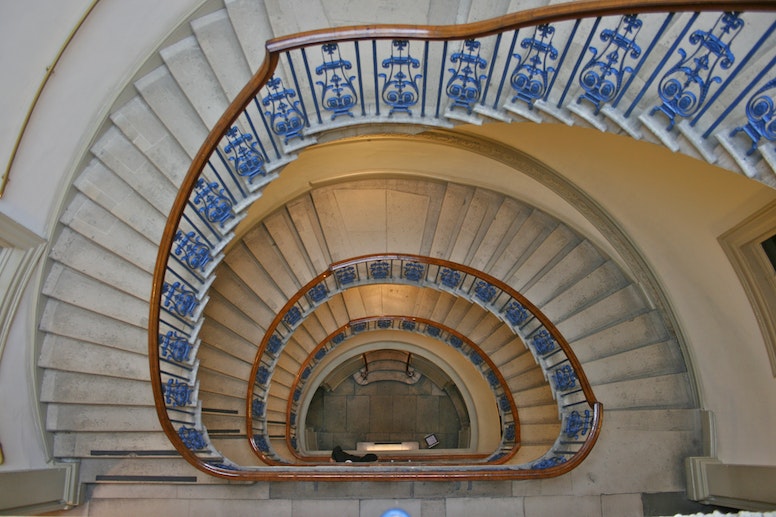 Photograph by Mike Peel, via Wikimedia Commons under CC-BY-SA-4.0 License.

The Courtauld is one of the most beautiful galleries in the capital (if you’ve never ice-skated in its resplendent courtyard at Christmas time, add it to bucket list without delay). As fate would have it, The Courtauld already had an excellent virtual tour in place, having been closed for major renovation since 2018. You can roam its rooms (at least as they appeared before work began) and zoom close in on masterpieces such as Vincent van Gogh’s Self-Portrait with Bandaged Ear or Édouard Manet’s A Bar at the Folies-Bergère. 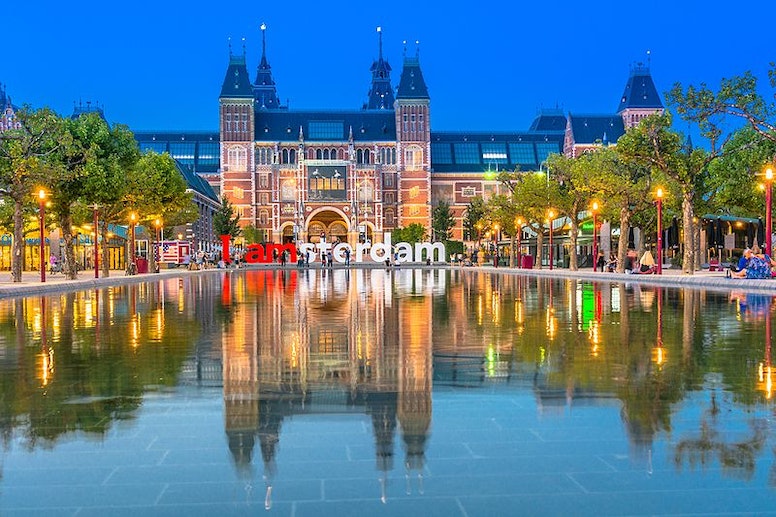 Image by Nikolai Karaneschev under CC BY 3.0.

Always fancied wandering the Rijksmuseum without hundreds of others also trying to catch a glimpse of Rembrandt’s The Night Watch? Well, this is your moment. The best way is to download the app, which offers fourteen multimedia tours: choose from options as broad as ‘Highlights of Honour’ (think Vermeer and Van Dyck) to highlights of specific periods, right through to more niche interests, such as ‘Tulips’ (this is Holland after all); ‘Selfie’; ‘Fashion Details’ and, our favourite, ‘Fancy Headgear’. Winningly, once we can all get out and about again, this app will be a perfect companion – with headphones – as you tour the museum IRL. 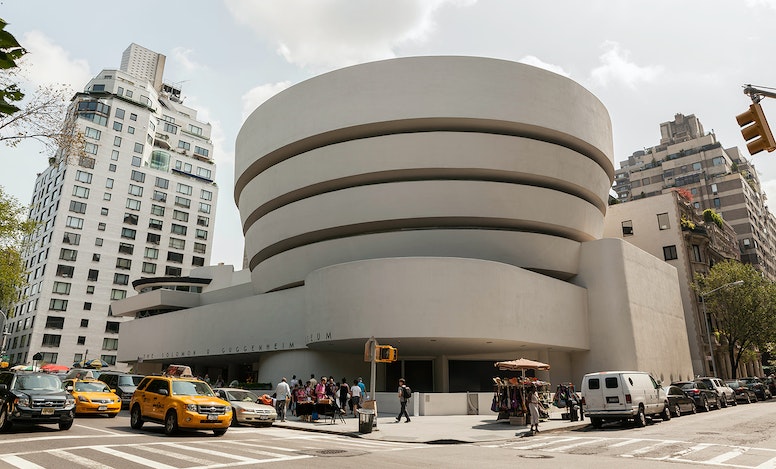 Photo by Reno Laithienne via Unsplash

The Frank Lloyd Wright showstopper of a building is as much a draw for visitors as any of the (also excellent) art on display. There are various avenues to exploring the works, but given the extraordinary form of the spiral gallery, our favourite is the Google Arts and Culture View, which allows you to meander down each level. Magical. 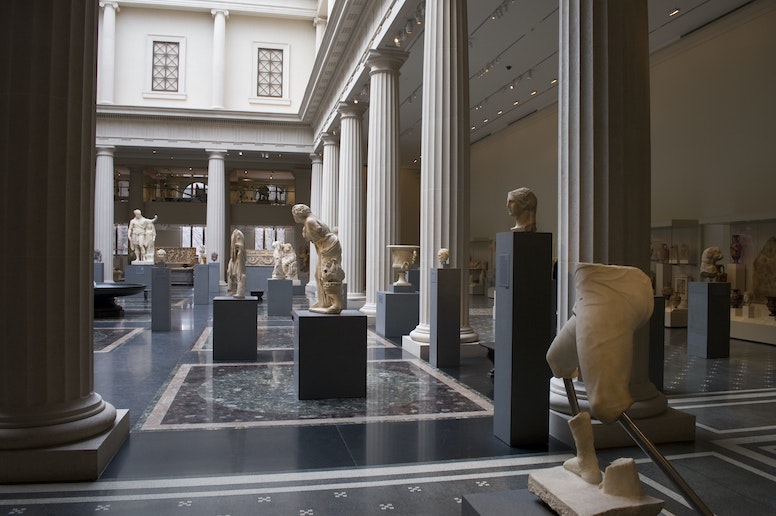 Photo by A. Balet, via Wikimedia Commons under Creative Commons 2.0 License.

Where modern art meets American history – with the world’s best costume department thrown in to boot – the Met Gallery is non-negotiable for any traveller to New York. In these days of lockdown, real life visits may be off the agenda, but the Met, in typically slick style, has produced a series of six sumptuous videos as part of its 360° Project. Rather than simply acting as compensation for not being able to go right now, these tours use spherical 360° technology to allow glimpses into the spaces you can’t or won’t have seen in person, giving extra privileged access. As it explains: ‘Viewed more than 11 million times, this series affords an access and a perspective typically unavailable to the public. Viewers can experience the magic of standing in an empty gallery after-hours, witnessing a bustling space in time-lapse, or floating high above The Met Cloisters for a bird's-eye view. We strung cables, removed protective covers from works of art, and rigged cameras up high, all to allow viewers to explore The Met as never before.’ 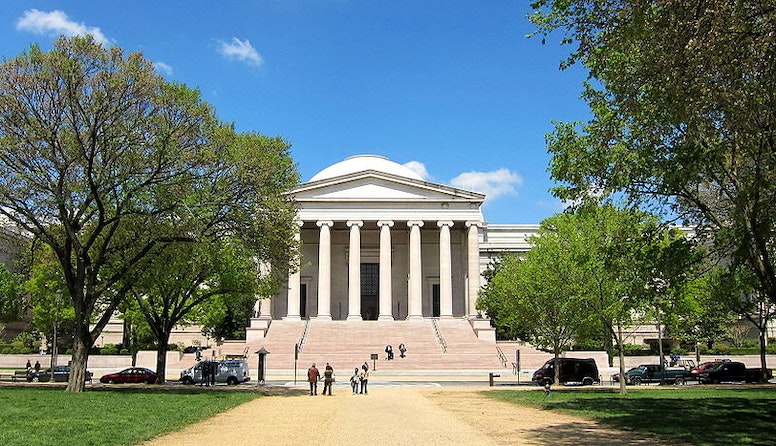 Image by AgnosticPreachersKid under CC BY-SA 3.0.

America’s national museum houses some 141,000 paintings, drawings and sculptures that stretch right back to the Middle Ages and right back again to the present. It is a gorgeous place, as anyone who has ever wafted about its Sculpture Garden will attest. These days, it is offering two online exhibitions via Google. The first, Fashioning a Nation looks at the country’s fashions from 1740 to 1895. The second is titled Vermeer and the Masters of Genre Painting, which is every bit as beautiful as one might expect. Both feature the works themselves alongside all the blurbs for the full gallery-going experience. 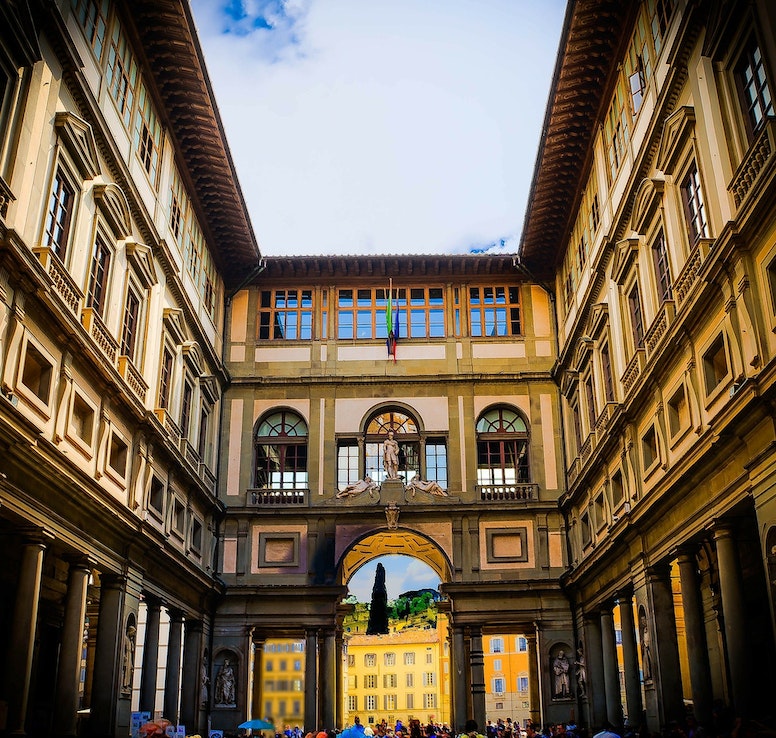 Have you ever been one of the hundreds of people in the line that often snakes all the way from the Uffizi down to the Arno, trying to get into its hallowed halls for a glimpse at Botticellis Birth of Venus or a Piero della Francesca masterpiece? Well, thanks to Google Arts and Culture, you can now jump the line and wander at will from your desk. Current online exhibits include Piero di Cosimo, ‘Perseus Freeing Andromeda’ and The Creative Process Behind Federico Barocci’s Drawings. Otherwise, you can browse by collection divided into: Renaissance, Oil Paint, Italian Renassiance, Baroque, and Italy. Many happy hours stretch ahead here. 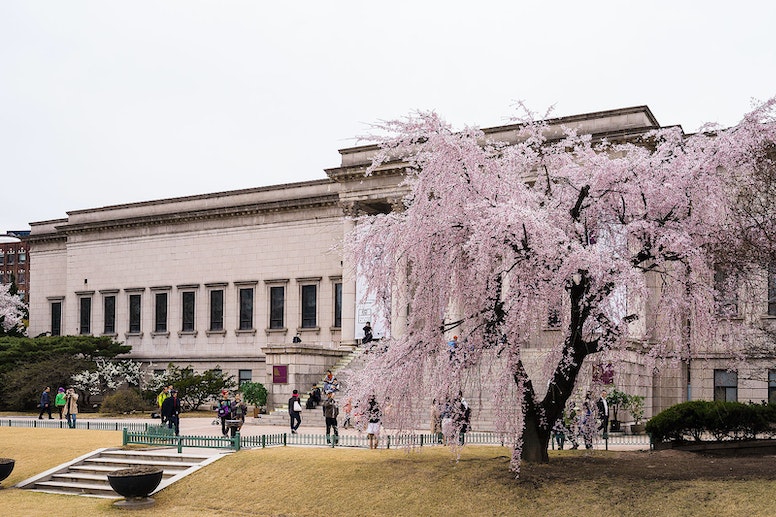 Seoul’s National Museum of Modern and Contemporary Art was founded in 1969. Since then, it has become the bastion of Korean contemporary art, and has some four outposts in Gwacheon (opened in 1986), Deoksugung (1998), Seoul (2013), and the most recent in Cheongju. Fly through six stunning floors of contemporary Korean – as well as international – art. 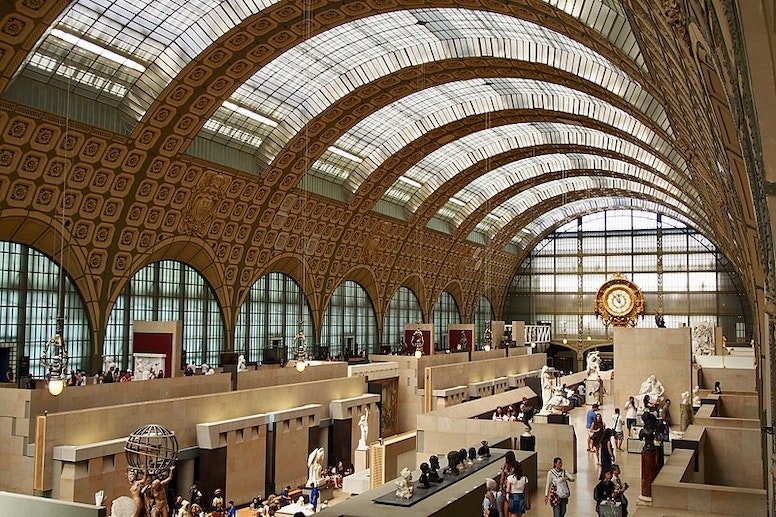 Image by Emmaphoto under CC BY-SA 4.0.

Oh how we love and long to be at the Musée D’Orsay. But how we also give thanks for being able to remind ourselves of its sheer beauty and brilliance thanks to this virtual tour. Housed in the former Orsay railway station, it was created as a gallery for the Universal Exhibition of 1900. You can explore its history via the virtual ‘From Station To the Renovated Musée D’Orsay’ show, or browse the works of Cézanne, Van Gogh, Monet, Renoir and Gauguin (among many others) in the online tours of its collections, in categories that include: ‘Canvas’, ‘Modern Art’, ‘France’ and ‘Impressionism’. 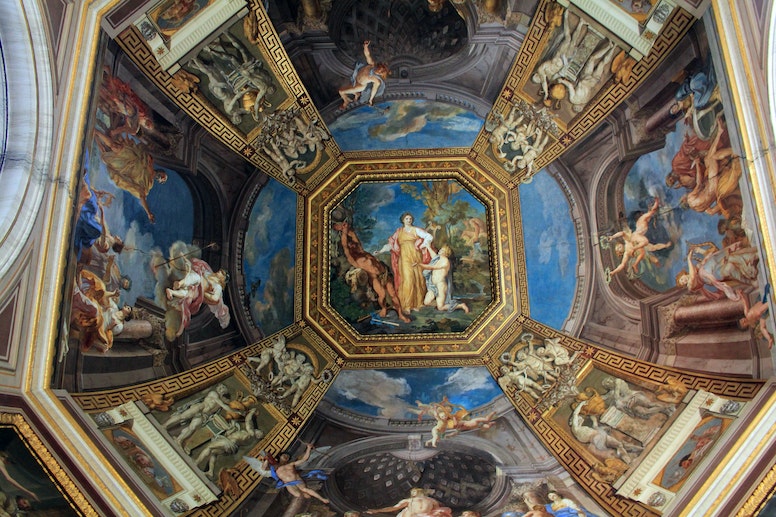 The smallest city in the world houses perhaps the most stunning museum anywhere on the planet. And while there is an embarrassment of riches from the classical world and the Renaissance period (seriously, don’t neglect Raphael’s jaw-dropping rooms), it is always, always the Sistine Chapel we go for first. Is there a more extraordinary work in existence? Answers on an (online) postcard please.

There are, of course, many other galleries and museums offering similarly great virtual show-rounds. Other honourable mentions must include the below. Happy touring.

The National Museum of Anthropology, Mexico

Self-isolating: 5 Of The Best Store Cupboard Recipes
Self-Isolating And Home-Schooling: 14 Tips From A Teacher To Keep You Calm
9 TV Shows You Need To Stream Now