To coincide with the launch of the Design Museum’s Moving to Mars exhibition, we’ve made it our mission to explore the best websites for your little astronauts.

This autumn, the Design Museum in London is hosting an exhibition – suitable for all ages – called Moving to Mars. In the mind-blowing, multi-sensory adventure, kids and adults alike will be able to immerse themselves in ‘the untouched beauty of the landscape [on Mars] and learn how rethinking daily life for a zero-waste, clean energy-powered civilisation might help future generations on Earth.’

The exhibition includes immersive environments, items that belong to NASA, the first sustainable urban design for life on Mars, the first spacesuit conceived for Mars’s surface, a fashion collection inspired by the Red Planet and much more. 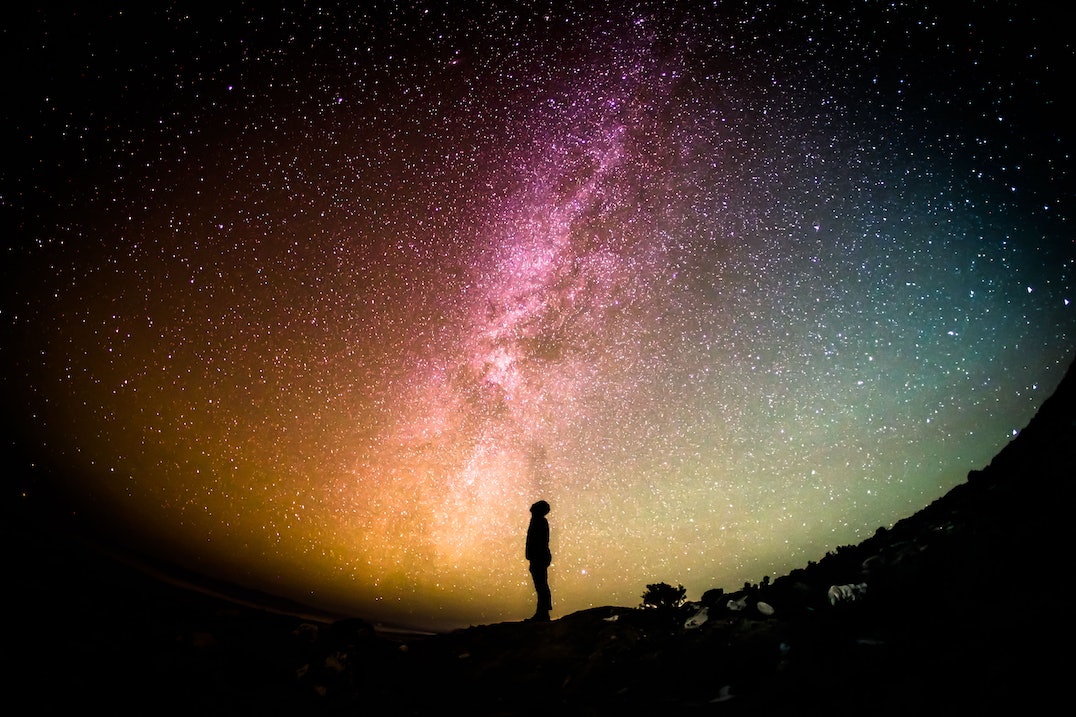 Once you’ve whetted their appetites with that level of intrigue, your little astronauts are sure to need a few space-themed resources like these ones.

NASA KIDS CLUB
This well-crafted site is a place where children can play games and learn all there is to know about NASA (America’s National Aeronautics and Space Administration) and its missions. Among the brilliant games is one where you can test your driving skills by maneuvering a rover around a simulated Mars.

We also like the Image Of The Day section, which posts a new, incredible photograph of something to do with space (could be a recently returned astronaut; could be a rocket launch; could be a planet) each day.

SMITHSONIAN NATIONAL AIR AND SPACE MUSEUM
Older kids will enjoy the sophisticated website of Washington DC’s National Air and Space Museum. Particularly brilliant is the video that recreates the launch of Apollo 11 and tells the story of the first landing on the moon.

Once they’ve watched that a few times, you are likely to lose them down a rabbit hole of high-quality webcasts, articles, blogs and photographs on everything from the Wright brothers to the potential habitability of Mars.

CBEEBIES SPACE
Like the entire CBeebies website, the brilliant Space page is a gift for those little people in your life who are aged under six and are crushing on the cosmos. 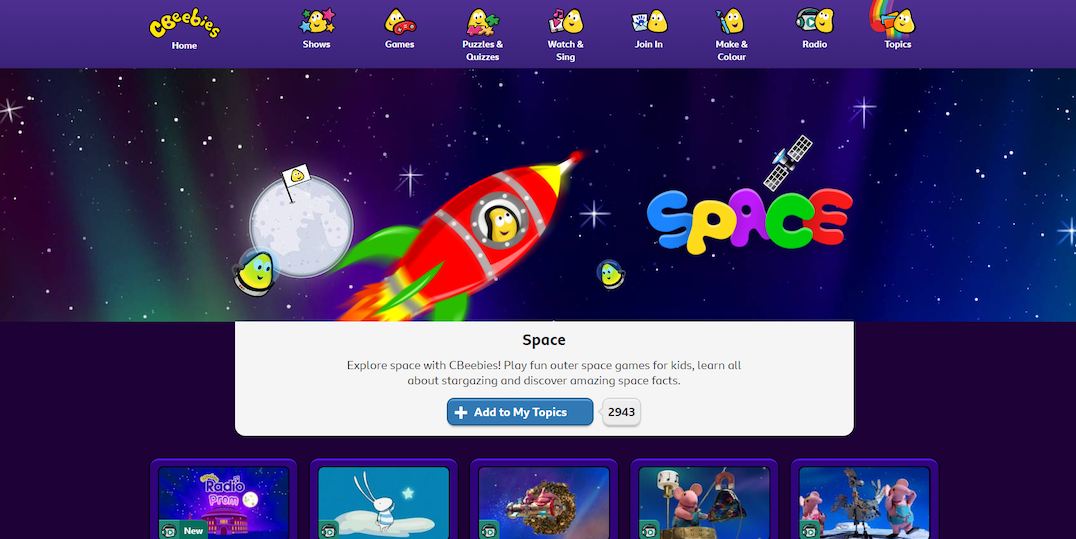 ROCKET STEM MAGAZINE
The mission of this not-for-profit organization, established in 2012, is to: ‘Inspire the world’s next generation of scientists, engineers and astronauts; keep educators informed on space developments and help them better work STEM (science, technology, engineering and mathematics) lessons into their classrooms; raise awareness of the benefits of space exploration among all citizens of planet Earth; and encourage international cooperation in space exploration.’

In these digital pages, well-conceived articles and interviews are accompanied by stunning photography. Bringing abstract concepts to life online, the magazine offers something to catch the imagination of all space enthusiasts. The Astronomy Guide is a particularly strong section. This website will force the moodiest teenagers out of their slump.

HUBBLE SITE
On April 24, 1990, a space shuttle called Discovery lifted off from Earth carrying the Hubble Space Telescope in its clutches. The next day, Hubble was released into space. Since then, says this site: ‘Hubble has revealed properties of space and time that for most of human history were only probed in the imaginations of scientists and philosophers.

Today, Hubble continues to provide views of cosmic wonders never before seen and is at the forefront of many new discoveries.’ On the slick site, through the Space Telescope Live, you can see what Hubble is looking at during any given moment. There are also amazing videos, quick facts, interesting statistics and gripping mission timelines, too.

SPACEKIDS
This family-run website might look kind of clunky but the idea behind it is genius. They say: ‘Our objective is to offer only the best, most fun and coolest space- and adventure-based toys and dressing up clothes. We appreciate quality, and many of the items we stock are the same ones that NASA offers in its shops at Cape Kennedy and Houston – authentically styled and with authorised NASA branding! 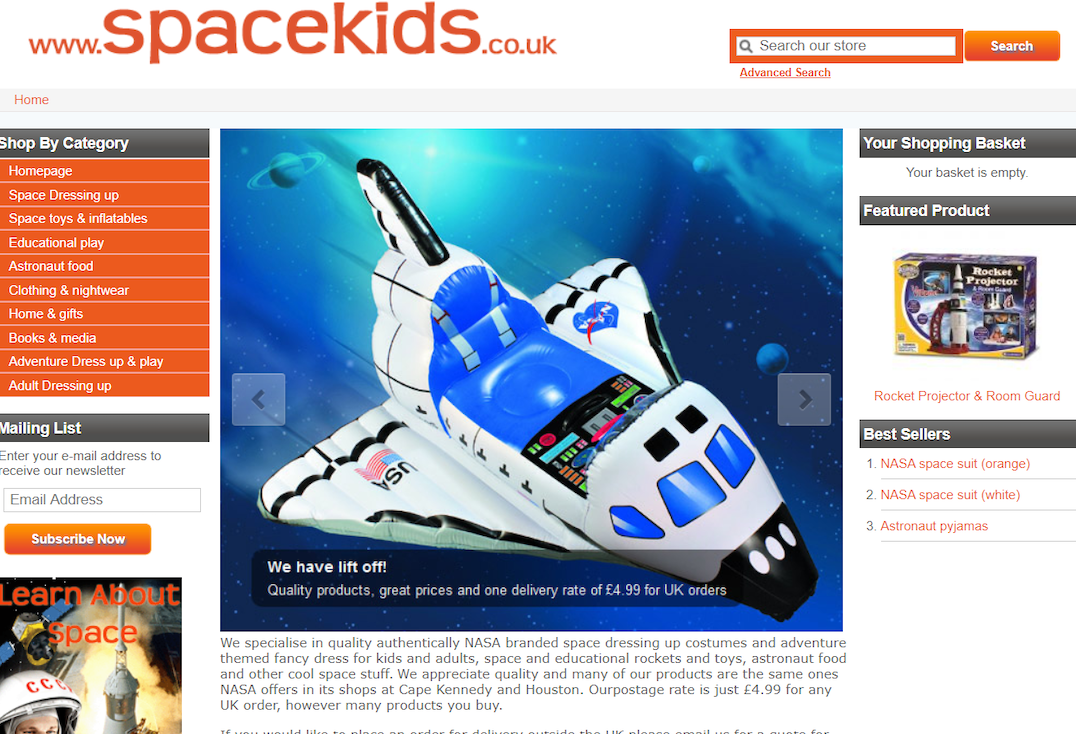 We’ve run all the products past our most discerning experts – our children! We are delighted to say that they have given everything we offer a resounding thumbs up.’ Indeed… we’d like to buy a pair of these Astronaut pyjamas for every child we know. Suffice it to say, you need look absolutely no further for all of your space-related shopping needs.

If the sound of Lego rattling away in an – albeit beautifully wrapped – box, fills you with dread, then give them something a little different this year.

Christmas Gift Guide for Under 5s

The choice can be overwhelming but not with our edit of the best gifts for babes through to five-year-olds.

How one mother felt so lonely, she designed a Tinder-like friendship app for mums.

Our gift edit is crammed with fun and interactive ideas for six to eleven year olds. 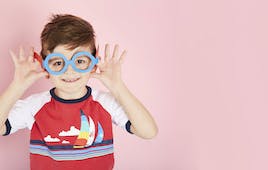 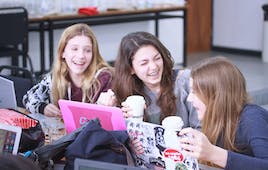 Get Your Kids Coding 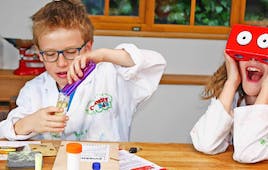