Have you gone potty for pottery? Ceramics artisans are trending on Instagram and pottery classes are on the rise. We throw our ten favourites out there.

In a digital world where we expect instant results, it’s telling that we crave the art of something handmade, rather than the mass-produced or disposable.

Our new favourite online discovery is the glut of pottery video feeds that make for compelling viewing. Is there anything more mesmerising than watching the footage of potters manipulating slabs of wet, wobbly clay into tactile objects of beauty? Forget online makeup tutorials or cooking videos; it is the pottery video feeds that now pull in followers by the thousand. Instagram has been a key driver for the younger generation of ceramicists and has transformed the way that potters sell their wares. Instead of being reliant on elitist galleries, their social media feeds do the hard work for them.

Want to watch the pottery wheel spinning? Here we shine the spotlight on ten Instagram feeds by well-deserved ceramics artisans. 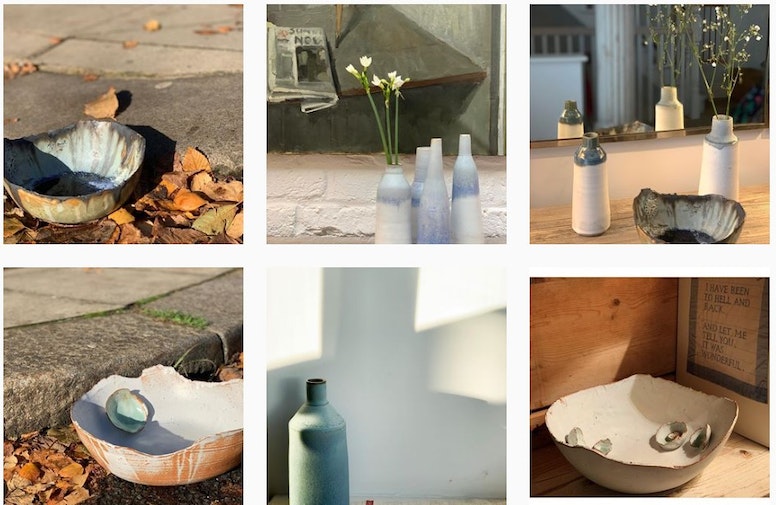 Pretty beaches and playful ceramics make for easy scrolling on Instagram. Florence St. George may be best known as Prince Harry’s ex-girlfriend, but she is, in fact, a talented – not to mention witty – potter. She splits her time between the Bahamas and London. Florence first developed her love of ceramics while studying Art History but it was only when, years later, she experienced postnatal depression that she turned her hand to creating ceramics in practice. Florence describes the processes of throwing and sculpting clay as therapeutic. Her social media shows her sense of humour too; she admits sometimes going too far and once bit chunks out of the edges of her Bite Me plate! 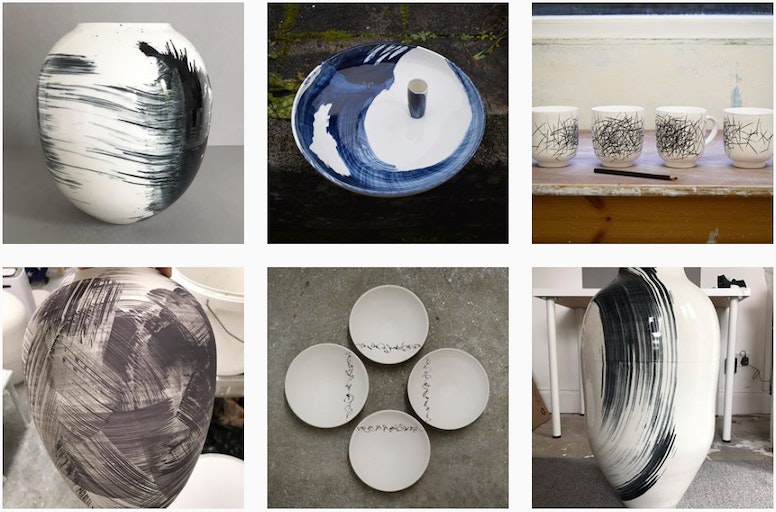 Watching potters throw clay online is both hypnotising and calming. Take a peek at Tom Kemp’s phenomenal Instagram videos and you’ll understand how he has garnered over 160k Instagram followers. Tom, who trained as a computer scientist, is a mainly self-taught artist. For many years, he studied formal writing and lettering which he would use to create abstract painting. He now uses the same abstract skills to apply quasi-writing to his pots. 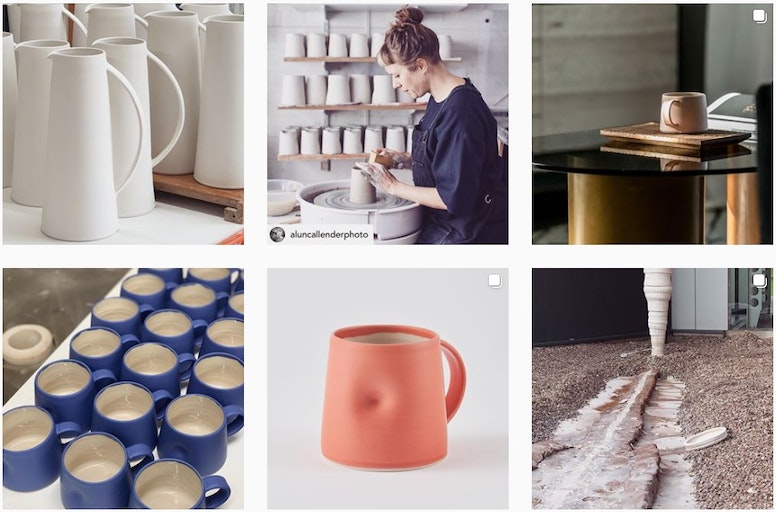 What we most love about Emma Lacey’s tactile ceramic tableware is that you can really see and feel how she’s made, manipulated and finished each item. Emma describes her clay as, ‘soft and tactile. It’s got a memory; it’s got lots of human qualities’. The popular dented mugs are inspired from hours of life drawing as a student and a love of sensual bodily forms. She works in her design studio at the end of the garden in the north London home that she grew up in. She also teaches at Central St. Martins Art College. 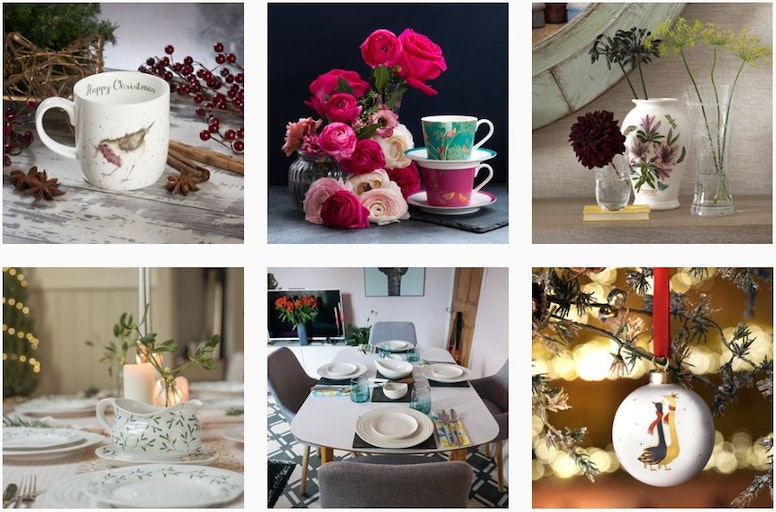 Perhaps the most famous British pottery of all is Portmeirion. The crockery company that sells all over the world has a spiritual home in Portmeirion village in North Wales but is actually based in Stoke-on-Trent in England. The pottery, which has enchanted customers of all ages since 1960, includes crockery, mugs, coffee sets, teapots and vases. You certainly will have seen Portmeirion wares and most probably will have eaten off it. Designer Sophie Conran has been designing tactile handthrown white tableware for Portmeirion since 2006. See its feed for typically British tea parties and interiors inspo. 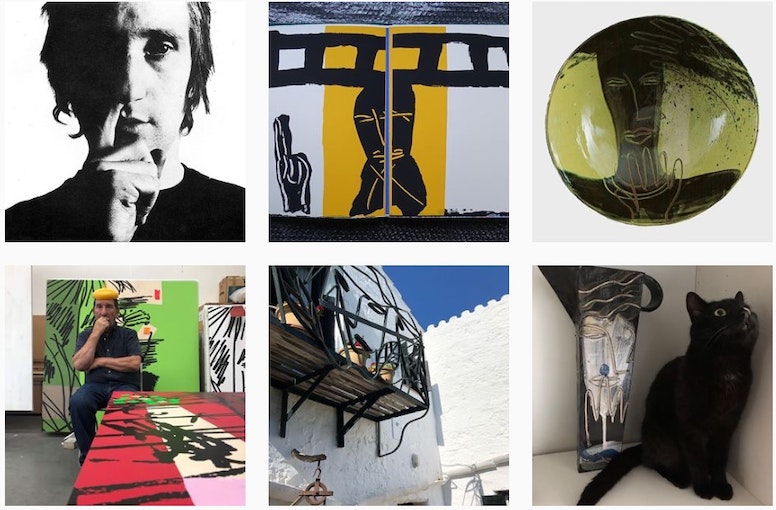 If you hanker after a bit of controversy, this is the pottery feed for you. The Scottish-born conceptual artist Bruce McLean, who is one of the major figures of contemporary British art, was once known as an art world dare-devil. McLean famously caused a stir at Saint Martins when he roundly rejected his tutors’ views of what sculpture should be. Aged 27, he was the youngest artist to be offered an exhibition at the Tate Gallery. The Barnes-based artist continues to challenge the pretensions of the art world and has a loyal following which admires his bold, vibrant prints and earthenware. 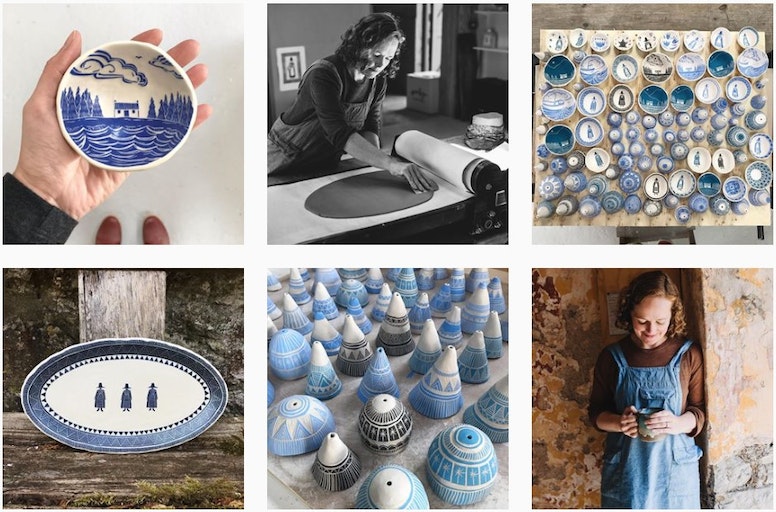 Like folk art? And pottery? You’re in good company. Over 18k followers have subscribed to the Skratch Ceramics feed to see the illustrative blue and white stoneware decorated with geometrics, landscapes and references to Welsh culture. Kate Russell’s pieces are decorated using a time-consuming technique called sgraffito (the art of carving into the top of hardened clay). Kate relies solely on Instagram and Facebook for marketing her pottery. ‘I know opinions regarding the influence of social media are mixed, but it really has done wonders to open up an international market to creative business owners,’ says Kate. 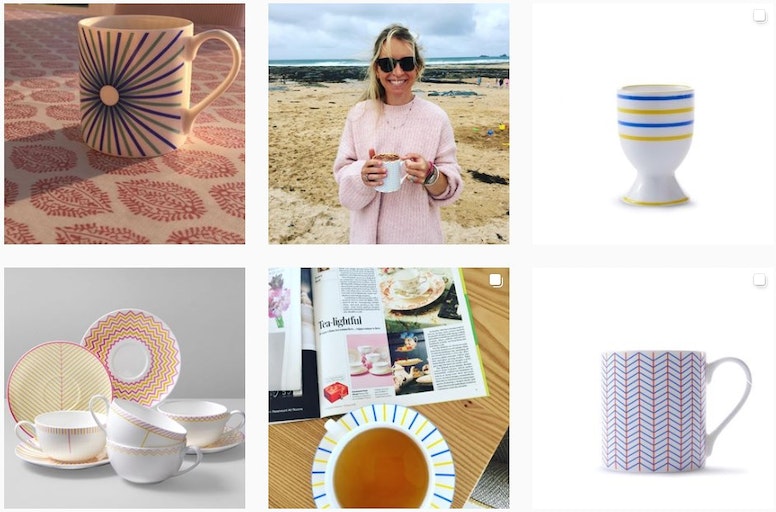 New kid on the ceramics block is Jo Deakin, a former interior decorator who designs brightly coloured fine bone china loved for its bright squiggles, lines and patterns. Her customers mix and match her colourful mugs, cups and saucers to create an eclectic and vibrant collection. Jo believes that hot drinks taste better when drunk from fine bone china and that it retains heat for longer, too. Ceramics have always played an important part in Jo’s life. As a child, she played with her grandparents’ eclectic collections and she later worked in the ceramics department at an auction house in Edinburgh. Her very first payslip from her initial job in London was spent on a china jar in a shop off Jermyn Street. Jo deliberately makes the saucer a generous size, to allow space for a little treat on the side. Our kind of girl! 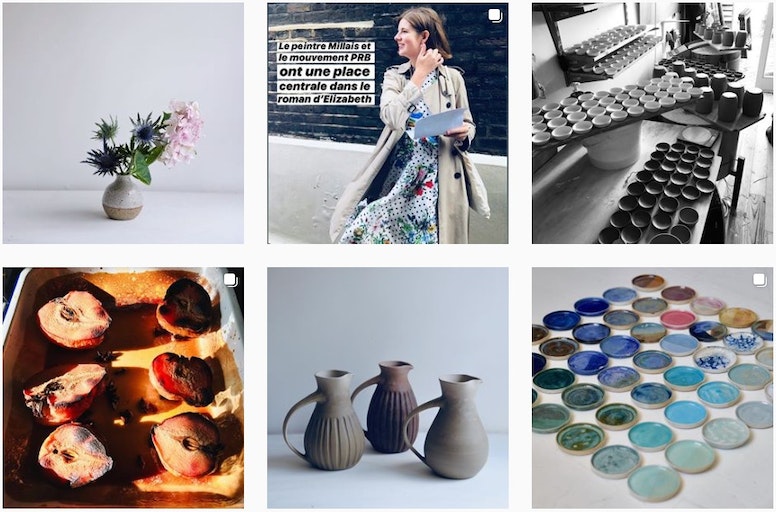 Elizabeth Macneal swapped in her city job as a management consultant because she missed doing something more creative. She has since written a novel, ‘The Doll Factory’, and now runs Limehouse Ceramics at the bottom of her garden in Limehouse, east London. She loves turning a lump of earth into any shape she wants and is inspired from Japanese and Scandinavian pottery. Social media has helped her grow her pottery business. ‘Absolutely nothing beats seeing somebody tag me in a photo of my ceramics in their new home,’ says Elizabeth. ‘I feel such a sense of pride that I made something which they now love and look at or use every day.’ 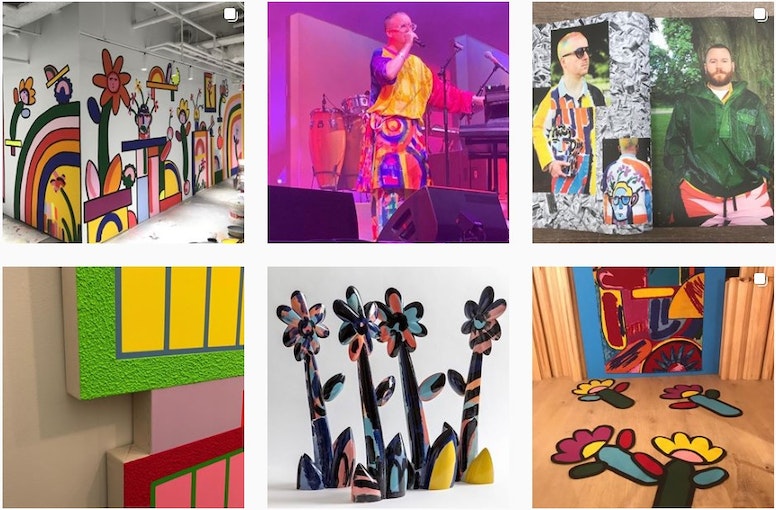 Want to smile? Scroll through the feed of Scottish-born illustrator, print designer and ceramicist John Booth. He creates the most brilliant idiosyncratic ceramic vases, all handmade and hand-painted and mostly in the shape of faces. John insists that he is not a formal ceramicist, instead describing his clay work as a way to apply his drawing to ceramics. John works in screen-painting and illustration but has said that he likes the three-dimensional object, preferring the tangible quality of ceramics over a flat piece of paper. He has collaborated with several fashion brands including FENDI, John Galliano and Zandra Rhodes. 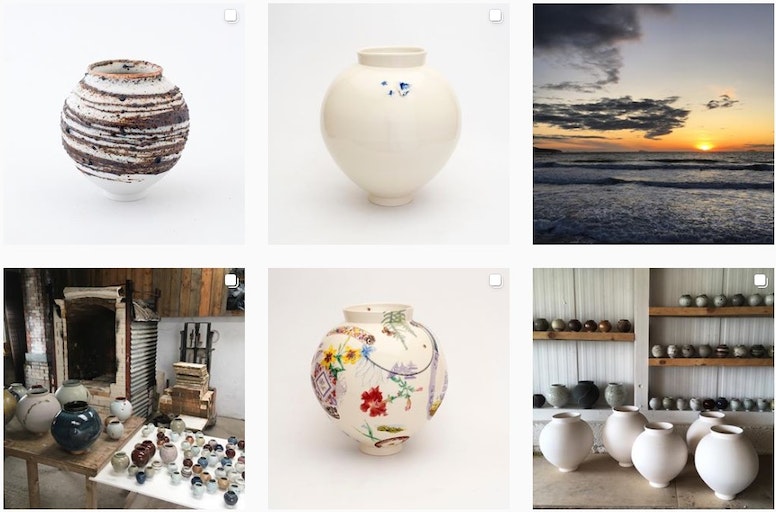 Pembrokeshire-based Adam Buick is a wonderful potter. He lives on the coast of Wales and creates unique wood-fired ceramics thrown at the potter’s wheel. Adam works in a purpose-built studio, which not only houses his electric and wood-fired kilns but also a couple of donkeys. What’s not to love? Nature and landscapes are his key influence. Adam uses the Moon Jar form, a Korean shape from the Choson Dynasty, as a canvas. Each jar is unpredictable with unique inclusions as a result of its metamorphosis during firing in the kiln.

The story of beautiful interiors brand Rowen and Wren, plus our pick of its collections.

12 of the Best Rattan and Cane Pieces

The cane and rattan trend is showing no signs of abating and we are sure that it is here to stay.

The founder of Edition 94, the lifestyle and vintage homestore in London, talks about podcasts, Florence St.George and travelling. 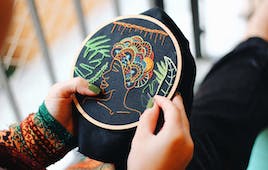 Zoned Out By Zoom? How Tapestry Helps Boost Mind And Mood 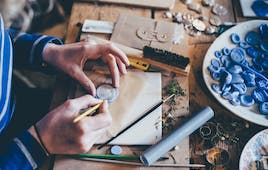 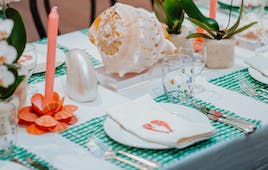 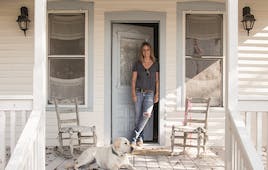