Feast your eyes on boundary-pushing and beautiful buildings courtesy of these star architects’ Insta feeds.

Flick through the pages of design magazines and you’ll find inspiration aplenty for your home. It might be of a modernist persuasion, or maybe you favour a more artfully distressed, bucolic aesthetic. Perhaps it ticks the box for various current interior vogues (Crittal windows and dividers, Belfast sinks, reclaimed everything, and so on). Don’t get us wrong, we’re suckers for all of that too, hankering variously after Scandi-style clean lines and dark, cosy interiors layered up with acres of block-printed fabric.

But occasionally you come across buildings that challenge the very notion of what architecture is. The ones that have you scratching your heads in wonderment and awe, marvelling at quite why it works, and how on earth anyone ever dreamt it up in the first place. You may not love every one of them – indeed, they are often deeply divisive – but these are the buildings that make you curious, that expand your mind and, at their best, deliver a hefty dose of pure delight. For the visionary people behind them are cut from the same cloth as the maverick geniuses who, in times past, once pioneered elegant Georgian proportions and in doing so displaced centuries of dark, low beamed housing; the ones who innovated Art Deco, Bauhaus, Expressionism, Modernism, Postmodernism, Brutalism and more.

There are great numbers of these clever folk to follow on Instagram and this is by no means an exhaustive list. But here are a few of our very favourites to marvel at.


Whatever you think of the man – design genius behind countless elegant additions to the urban landscape or someone whose best work is behind him post-Gherkin – it is nonetheless fascinating to see the veteran architect on Insta. Why? Because he is famously private and rarely gives interviews, meaning that this, albeit curated, insight into his life is unprecedented.

We love the images of the good Lord himself in lycra at the start of ski races, admiring buildings – some by other architects such as Zaha Hadid, others of his own, including the glorious Virgin Galactic Spaceport in New Mexico) – and casually hanging out on a Miami balcony (designed by him, naturally) after chats with Jonny Ive. As you do.

It’s hard to overstate how joyous and refreshing Sam Jacob’s radical work is in a world of glass towers and steel. A supreme talent long committed to producing work that asks searching questions of what architecture can and should be, he was one of a trio of architects – the other two being Sean Griffiths and Charles Holland – who previously headed up the practice known as FAT (Fashion Architecture Taste). Formed as a fairly humble project to take their ideas into the world, they were given a surprising number of chances to build, which they did, with an invention rarely seen in the often staid and rule-bound world of architecture.

There was a gingerbread temple in Essex in collaboration with Grayson Perry; a Romanesque church covered in blue sequins; and houses that look like surreal, almost cartoon-like, collages. In 2014, after 23 years together, Jacobs and the others went their own ways, and he continues to fly the flag for an interdisciplinary, art-driven approach to architecture – a revolutionary thing indeed a world where sleek glass structures are so often the default setting when it comes to modern architecture. Happily, unlike much architecture that doesn’t conform to arbitrary rules, his work is not confined to the pages of books or the safety of theory (cross reference the great Cedric Price); his clients include the V&A, the Science Museum and local authorities in Croydon and Milton Keynes. Long may he continue to delight us.

The Switzerland-based architecture practice headed up by Jacques Herzog and Pierre de Meuron is the design powerhouse best known in this country for its conversion of Bankside Power Station into what we now know as Tate Modern. Both partners teach architecture at Harvard. They’ve scooped the Pritzker Prize, the ultimate honour in the profession.

And they are currently working on a dizzying roster of projects from the Vancouver Art Gallery to a contemporary art museum in Mexico. And yet still they find the time to populate the little squares with schemes, both realised and in the planning, for our delectation, creating a collage of their modernist work, often inspired by the artist Joseph Beuys. They like to think of their work as objet d’art that, thanks to feats of engineering, have been expanded to the often epic scale of their public buildings. Fascinating stuff.


We first became aware of Snohetta when we stumbled across images in Dezeen of the studio’s 2011 Norwegian Wild Reindeer Centre Pavilion, whose rippled timber core was designed as an echo of the Dovre Mountains in Norway is which it is situated. It is a thing of such exquisite simple and natural beauty that we were dumbstruck, as well as being utterly delighted by the idea of a building created for the sole purpose of clapping eyes on reindeer in the wild.

Since then, we’ve come to know their work better, and we still adore their cabins, such as this sustainable, forest-side beauty, as well as other projects, such as The Arc, an extraordinary visitor centre in the Arctic. And if only all hospital buildings looked like Snohetta’s wooden shelter additions to two of Norway’s largest hospitals. Sigh.

Headed up by brothers and UCL graduates, Dimitris and Konstantinos Karampatakis, this Athens-based practice works internationally on projects from hotels and resorts to jaw-dropping residential schemes. The practice’s forte lies in taking inspiration from the traditionally Greek approach to convivial living and giving it a wholly contemporary new twist.


The ethos is evidenced across the studio’s work, from the creation of Opso, a Greek restaurant in Marylebone that, via its use of natural materials such as Kavala marble wall cladding and brass accents, marries London and Athens beautifully, right through to this astonishing marina beach club in Turkey.


We also love the brothers’ contemporary take on the white-washed villa. Oh, and this stunning beach bar, which makes us long and sigh wistfully for sun. Quite simply, these guys make spaces you want to be in.


Studio Gang, led by its founder Jeanne Gang, is a Chicago-based practice with a second studio in New York. Founded in 1997, it is, by large architectural studio standards, a relatively young operation and yet it has made significant waves with its Chicago Aqua Tower (note the fluidity of the rippling façade), and we love its Writers Theatre in Illinois, a non-profit theatre company. On its website it says, ‘We help people, organisations and cities design their futures.’ With design this good, the future is, undoubtedly, bright.


Dutch architect Rem Koolhaas founded his practice OMA in 1975, since when the Pritzker Prize-winner has been a proponent, broadly, of deconstructivism. Considered hugely important both for his works – including Seattle Central Library, The Children’s Centre at the Samsung Museum of Art in Seoul, Casa da Musica in Porto and Maison a Bordeaux – and for his thinking, Koolhaas in a rare thing: an active and prolific architect and an intellectual. His writings critique the Modernism that prevailed when he rose to prominence, including the guiding maxim for many designers that ‘form follows function.’ Jaw-dropping stuff.


In 2016 and 2018 respectively, architecture lost two of its luminary figures in the form of Architectural Association alumni and contemporaries, Zaha Hadid and Will Alsop. Wildly divergent from one another, they were nonetheless united both in being two of the most imaginative talents of their generation, and in their horror at unthinking convention.


The former was famed for her undulating curved forms as fluid as liquid, as if the buildings themselves were molten and malleable, as demonstrated in the extraordinary 520 West 28th, her superb condominium residences on the High Line in New York. The latter was known as the mischievous enfant terrible of architecture, and yet he took design, and the responsibility to create delight through his buildings, absolutely seriously. Painting was the starting point for all of his work, which merged art with architecture; to him the two disciplines were part of a continuum, rather than distinct. In his lifetime he won the Stirling Award for the Peckham Library and now, posthumously, he continues to change the landscape. Most recently, residents of Whitechapel have witnessed his Neuron Pod take shape, an arresting and loveable rusty porcupine on the campus of Queen Mary’s University. Both architects have been survived by their practices, which continue to work and honour their legacies. And that’s the thing about architecture. It’s such a long process that the fruits of the imagination can keep on giving years after the architect had departed – as seen on their Insta feeds, and in our many layered urban landscapes.

My Web with Matt Gibberd, Co-founder of The Modern House
10 Best Architect Designed Places to Stay in the UK
Marian Boswall

Expert insight on how to use brick effect wallpaper in your home, from industrial sophistication to cool farmhouse-chic.

Kate Watson-Smyth, founder of interior design consultancy, Mad About The House, show us around her web. 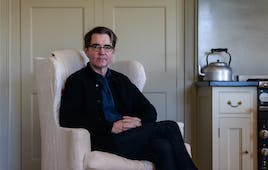 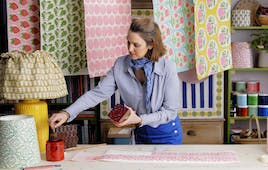 13 Of The Best Workshops To Enrol In Now 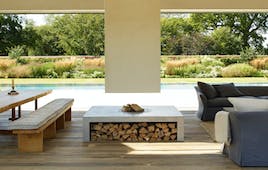 14 Of The Most Glorious Interiors Accounts On Insta