‘There is nothing like staying at home for real comfort.’ So said Jane Austen, whose Chawton retreat these days daily receives visitors in numbers that would have had Mrs. Bennett’s famous nerves in tatters. A couple of centuries later, Maya Angelou echoed the sentiment, with the words ‘The ache for home lives in all of us, the safe place where we can go as we are and not be questioned.’ While, for Charles Dickens, simply and persuasively, ‘Home is a name, a word, it is a strong one; stronger than magician ever spoke, or spirit ever answered to, in the strongest conjuration.’

At its best, the writer’s home is a sanctum, a place where peripatetic and unruly ideas are harnessed to become at last coherent; a private place of ordered calm or chaos, a vantage point from where the world comes into focus; a place in which to drink quantities of tea while scribbling – or tapping – away. But for some, the sense of belonging and the aesthetic of home itself constitute compelling muses.

Here we go on a grand literary tour of six of the best, which you happen to be able to visit.

William Wordworth’s Dove Cottage
William Wordsworth’s opus was most prolifically penned at Dove Cottage, now a museum, in the Lake District’s Grasmere, where his keen sense of the connection between self-identity, place and poetry came to the fore. Having spied his future home in 1799 on a walking tour with Samuel Taylor Coleridge who lived in nearby Keswick, he and his sister Dorothy moved in and lived at Dove Cottage for the ensuing eight years. This followed a nomadic episode in which Wordsworth had made his way across Europe; he was, by now, ready to settle down and produce a body of work. Which he roundly did. 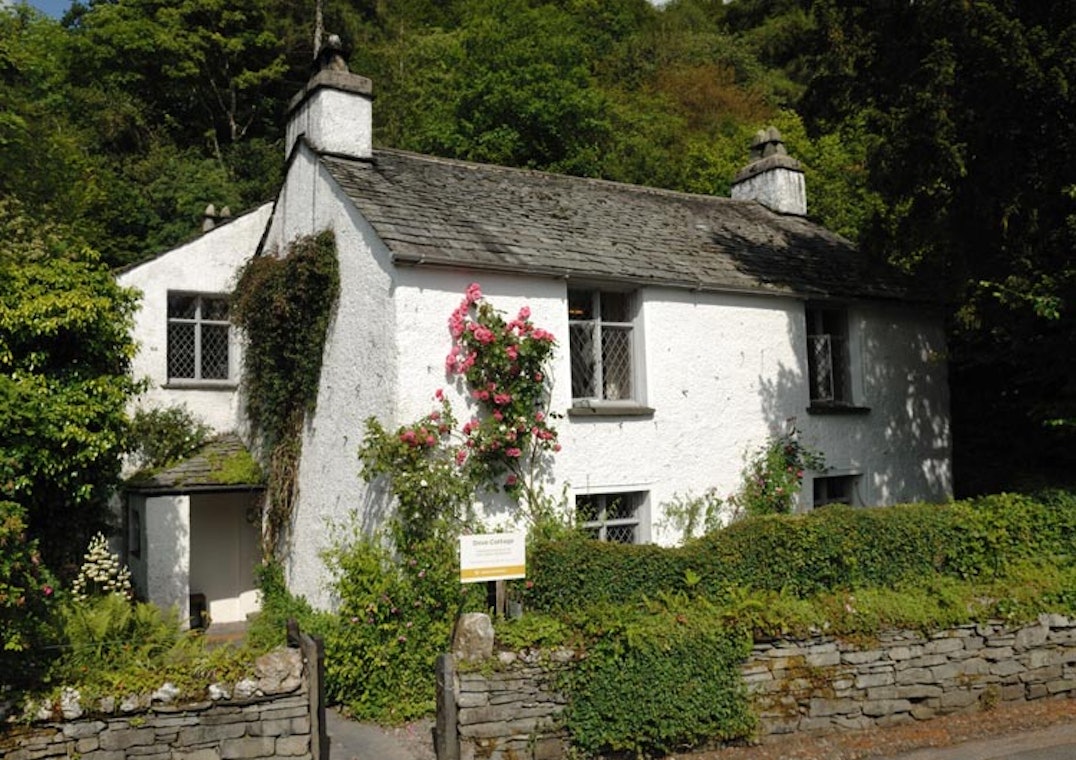 Indeed, those immortal lines, ‘I wandered lonely as a cloud’ were inspired by a walk with his sister (Wordsworth is said to have walked 175,000 miles in his lifetime), who recorded in her Grasmere diary, ‘When we were in the woods beyond Gowbarrow park we saw a few daffodils close to the water side… we saw that there was a long belt of them along the shore, about the breadth of a country turnpike road. I never saw daffodils so beautiful they grew among the mossy stones about and about them, some rested their heads upon these stones as on a pillow for weariness and the rest tossed and reeled and danced and seemed as if they verily laughed with the wind that blew upon them over the lake, they looked so gay ever glancing ever changing.’ And thus, taking his cue from his sister, Wordsworth wrote perhaps the most famous lines in English poetry.

Agatha Christie’s Greenway
For Agatha Christie, home was a place of stirring repose. Greenway, the National Trust-owned Devon property, which until 2005 remained in the Christie family, was the writer’s holiday home from 1938 to 1959. Easily fathomable is its appeal to Christie, who had been familiar with the house since childhood. From what was once her bedroom, there is an endless vista down the River Dart, which prompted her to name Greenway ‘the loveliest place on earth.’

In her autobiography, she recalls ‘...one day we saw that a house was up for sale that I had known when I was young – Greenway House, on the Dart, a house that my mother had always said, and I had always thought also, was the most perfect of the various properties on the Dart… and very beautiful the house and grounds were. A white Georgian house of about 1780 or 90, with woods sweeping down to the Dart below… the ideal house, a dream house.’ 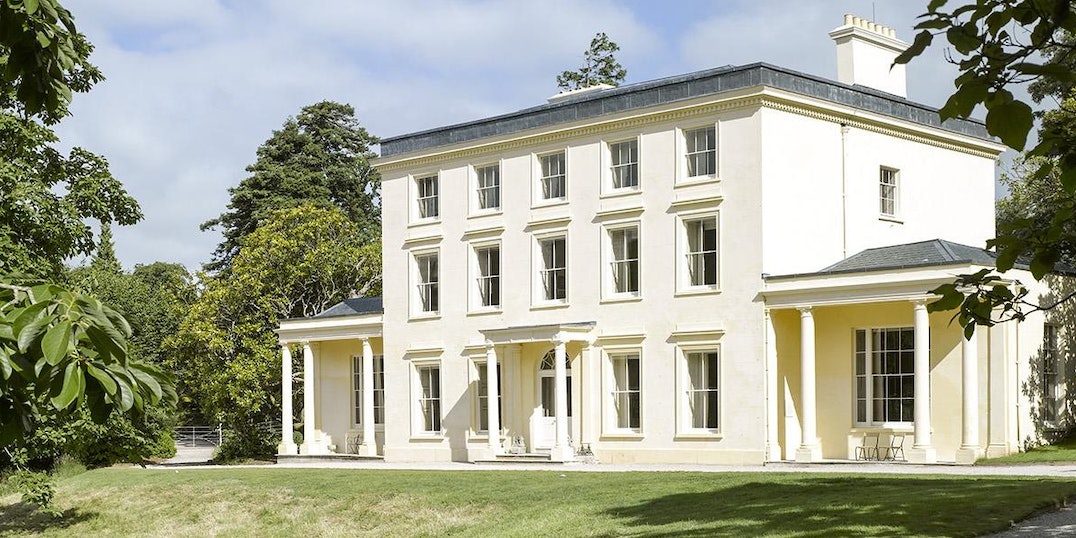 Greenway’s interior is no less dazzling, most notably the library, which was decorated with a frieze painted by Lt Marshall Lee of the United States Coastguard in 1943. While she may have retreated to Greenway in order not to write, Christie would habitually gather friends in her drawing room to delight them with chapters from her new books which would occasionally afford them a glimpse of their lodgings. She was certainly inspired by Greenway as a setting in at least three novels: Five Little Pigs, Ordeal By Innocence and Dead Man’s Folly. In the latter, her most famous creation, Hercule Poirot deigns to engage his little grey cells investigating a murderous plot of intrigue at Nasse House. On his arrival, Christie gives us this thinly veiled description: ‘He took Poirot’s case from him and opened the door of the car. They drove away from the station over the railway bridge and turned down a country lane which wound between high hedges on either side. Presently the ground fell away on the right and disclosed a very beautiful river view with hills of a misty blue in the distance. The chauffeur drew into the hedge and stopped. ‘The River Helm, Sir,’ he said. ‘With Dartmoor in the distance.’

At this point, parallels cease; Agatha Christie was – fortuitously – never beset with cadaverous propositions scattered about her land. Rather she was so enamoured of her home, that she could not resist its immortalisation. 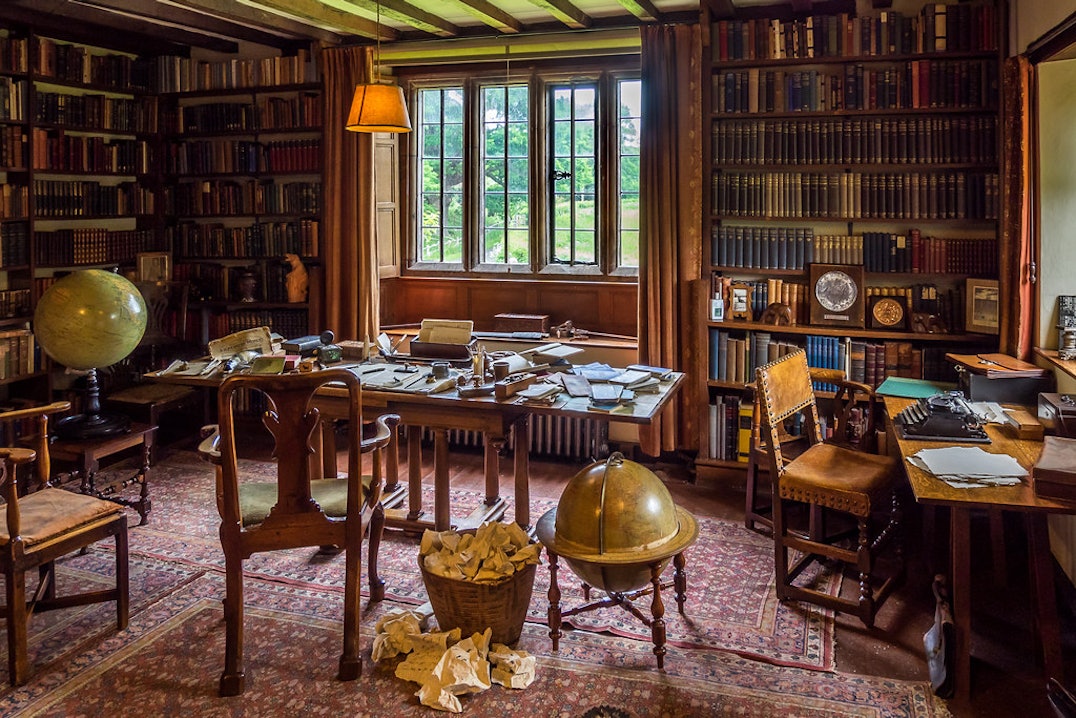 Bateman’s, the 1634 sandstone house occupied by Rudyard Kipling and his wife from 1902 until his death in 1936, proved to be both inspiration and sanctuary. At the time of purchase, Kipling was the best known writer in the English speaking world but his output had been almost exclusively inspired by his travels and youth in India. The move to the rich woodland of the Sussex Weald provided the material to write tomes focused on the Kent and Sussex countryside: Puck of Pook’s Hill, The Glory of The Garden and his autobiography, Something of Myself – all were composed here. But Kipling was also in a state of fragility. Only three years earlier, his six-year-old daughter Elsie had died of pneumonia, leaving him broken-hearted. Bateman’s was to prove, if not cure, at least tonic. He wrote to a friend of his new purchase: ‘…in reality the house is little – not a manor house or a ‘place’ - just the kind of house that a successful Sussex iron master builded for himself two hundred and fifty years ago. It hasn’t a lodge or any nonsense of that kind… We coveted the place for two and a half or three years and have loved it ever since our first sight of it. Since which as the advertisements say, ‘we have used no other.’ 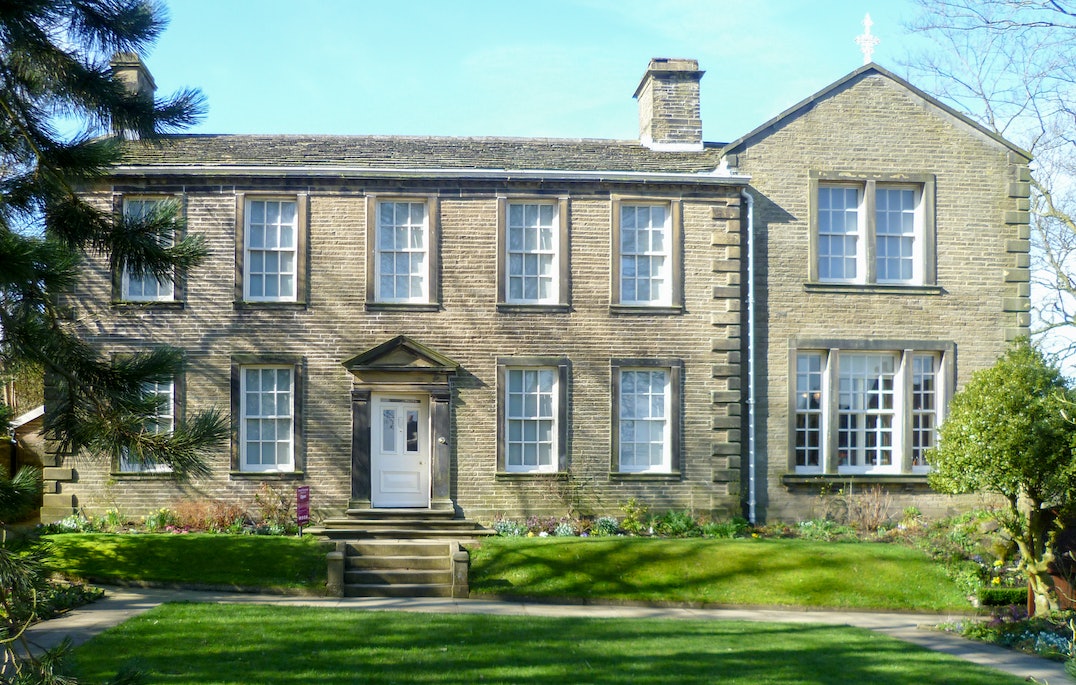 Rather than gravitating toward them, some writers grow up in homes that go on to form the basis of invention. Although wildly divergent in style and chronology, the remarkable Bronte sisters share something in common with the equally eccentric Nancy Mitford, one of five surpassingly unconventional sisters herself; all were moved to write fiction that took its cue from their homes. Haworth Parsonage (now a popular draw for tourists) in Keighley, West Yorkshire was not only used as model in Shirley, but the general remoteness and hardship certainly formed a theme throughout the gothic and turbulent melodramas of Wuthering Heights and Jane Eyre. The girls, along with their older dissolute brother, Branwell, lived humbly at the parsonage with their father – their mother having died when they were children. While their brother departed, the girls remained, aside from episodes as teachers. The seclusion fired their young imaginations. Patrick Bronte, parson and Bronte patriarch, encouraged their insatiable consumption literature and as children, they had already begun to write and illustrate their own books.

Beatrix Potter’s Hill Top
When Beatrix Potter was bereaved following the sudden death of her fiancé, the bereft author’s first decision was to buy Hill Top, her now National Trust-run 17th-century farmhouse in the Cumbrian village of Sawrey, purchased with proceeds from her ‘little books’. Her new home provided the model for the farmhouse in The Tale of Samuel Whiskers and The Tale of Tom Kitten and her fantasy of a bucolic life found expression through the home she created. Each room was a stage set upon which the stories could play out (the oak dresser in the kitchen, for example, features in The Tale of Samuel Whiskers). But, above all, it was at the Lakes, resplendent with mists and snow in the winter, that she could allow her grief to manifest. As she said: “Somehow winter seems more appropriate to the sad times, than the glorious summer weather.” 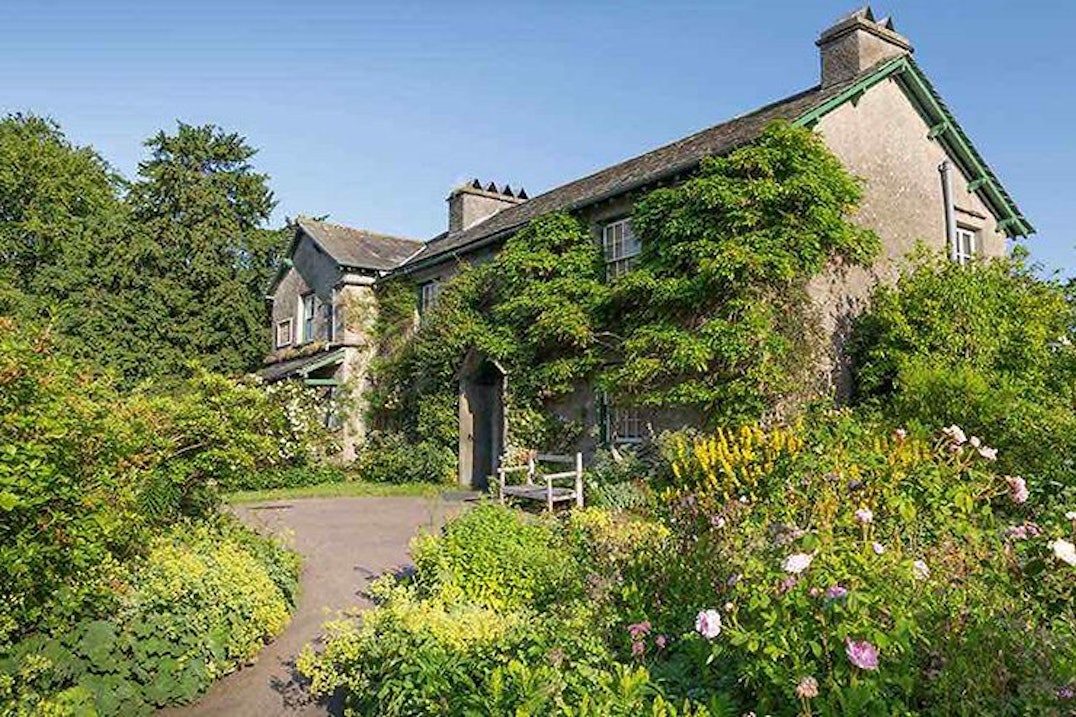 Happily, neither the Lakes nor Hill Top were destined to forever remain places in which to explore the depths of her sorrow. She expanded her life in the Lake District, buying numerous fell farms and breeding Herdwick sheep (a threatened breed native to the area), in the process meeting William Heelis, a Westmorland solicitor who managed the deals on the extensive property she bought in the area. The pair bonded over their mutual love of the area and, at 47, in October 1913, Beatrix Potter married.

Beatrix Potter’s association with Cumbria and its lakes endures today. Her early sojourns in the area shaped the books that have charmed millions, while her legacy has been to preserve that glorious county as she left it. Schooled in the care of the environment as a teenager by Lake District vicar Hardwicke Rawnsley, she supported him for life, not least when he went on to become a founder of the National Trust. She faithfully followed its guidelines for land maintenance and farming and, vitally, left her 4,000 acres, 14 farms and 20 houses to the Trust, as well as Hill Top – all thanks to the money earned by Jemima, Peter, Mrs Tiggywinkle and friends. It was a fitting bequest, designed to preserve the place she’d been happiest; the image of a tweed-clad Potter searching for errant sheep and winning prizes for her livestock is not as enduring as that of the young illustrator, but it was certainly the role in which she was most contented. 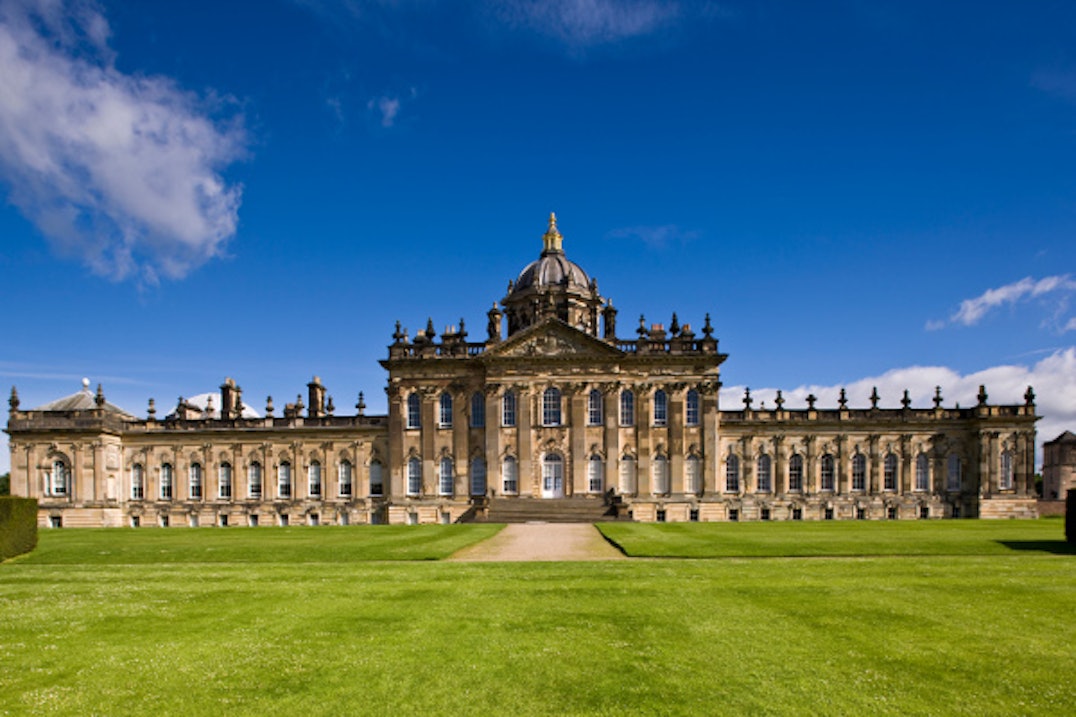 The John Vanbrugh design for Castle Howard (not, in fact, technically, a castle, but built on the site of a former fortress) was conceived in 1699, commissioned by the 3rd Earl of Carlisle. It would take a further 100 years and the lifespan of three earls to complete. Lived in ever since by the Howard family, barring a brief interlude as a girls’ school in World War II, it has been open to the public since 1952. But it was post 1981 that its popularity surged, after it was used as the eponymous Brideshead, seat of the Marchmain family, in the Granada Television adaptation of Evelyn Waugh’s Brideshead Revisited. Do ensure a visit to the 18th-century chapel – made much of by Waugh – which was, curiously, intended as a dining room originally. And finally, do, upon leaving, utter the words: “I had been there before; I knew all about it” in your best Jeremy Irons gravelly tones.

Can’t find time to curl up with an ever-building tower of new book releases? Check out these must-listen titles for the season.

The author of The Mitford Murders and the companion books to TV series, Downton Abbey, shows us around her digital web.

The Crown In Crisis is a fascinating, gripping and often revelatory new look at the Abdication Crisis, by Alexander Larman. 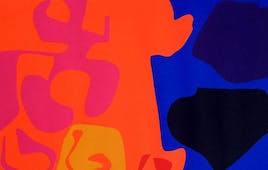 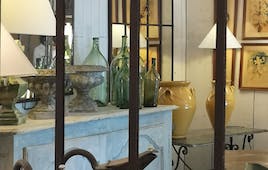