Portuguese food is unsung despite being reliably simple and sublime. And neither is it just for summer.

French, Italian and Spanish cuisine is, rightly of course, lauded to the skies on British shores, transporting us as it does with every mouthful to Mediterranean idylls: to perfect Provencal bistros and Parisian brasseries; to the culinary nirvana of Italian backstreet trattorias; and to those ecstatically good Spanish tapas bars where each morsel is a revelation. And yet somehow, Portuguese gastronomy, while enjoyably wolfed down on holiday and by those in the know, does not, for reasons unknown, command the quite the same foodie reverence in this country – an egregious oversight we feel bound to put right.

The flavours of Portugal are every bit as sublime as those of her more celebrated neighbours (on a side note, in our opinion, Portuguese olive oil is the best you can get). For fish lovers, the simplicity of the salted cod or the crispy whole sardines – when actually in Portugal, caught on the Atlantic coast – served with rice is perfection. And as for the custard tarts – or pastéis de nata – the proper words to describe their sheer deliciousness just don’t exist. In short, like all the best dishes, this is simple food using excellent ingredients honed over centuries. And neither is it just for the summer months. These are just a few of the hearty and comforting recipes we’ll be rustling up over autumn and winter, wishing ourselves away to Lisbon – at least via our tastebuds. 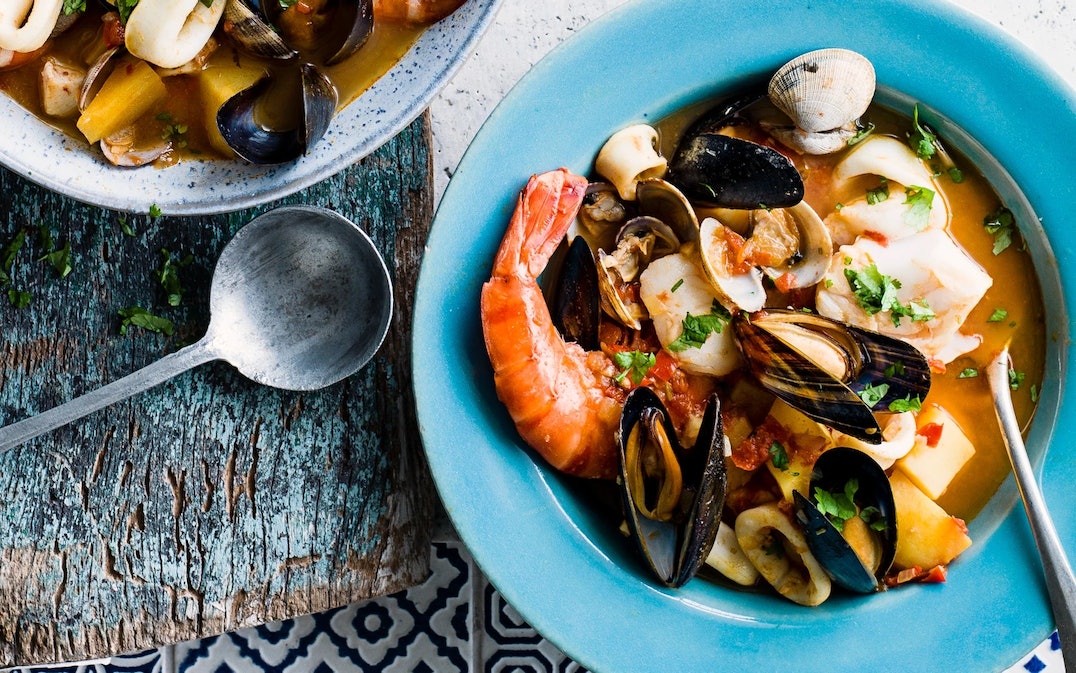 You can always rely on a medley of seafood to be a knockout to look at. Happily, this one is equally showstopping to taste. Named for the ceramic pot it is traditionally cooked in (the caldeirada), this is an easy to throw together, hearty and whole family-satisfying stew to feast on all through the colder months. The potatoes give it an earthiness, while the fish, saffron and bay leaf and dry white wine supply the abundant flavour. Healthy and wholesome, it’s also flexible: there are no set rules as to which fish or seafood to throw in. Just select what looks nicest at the fishmonger, and serve with some crusty bread. 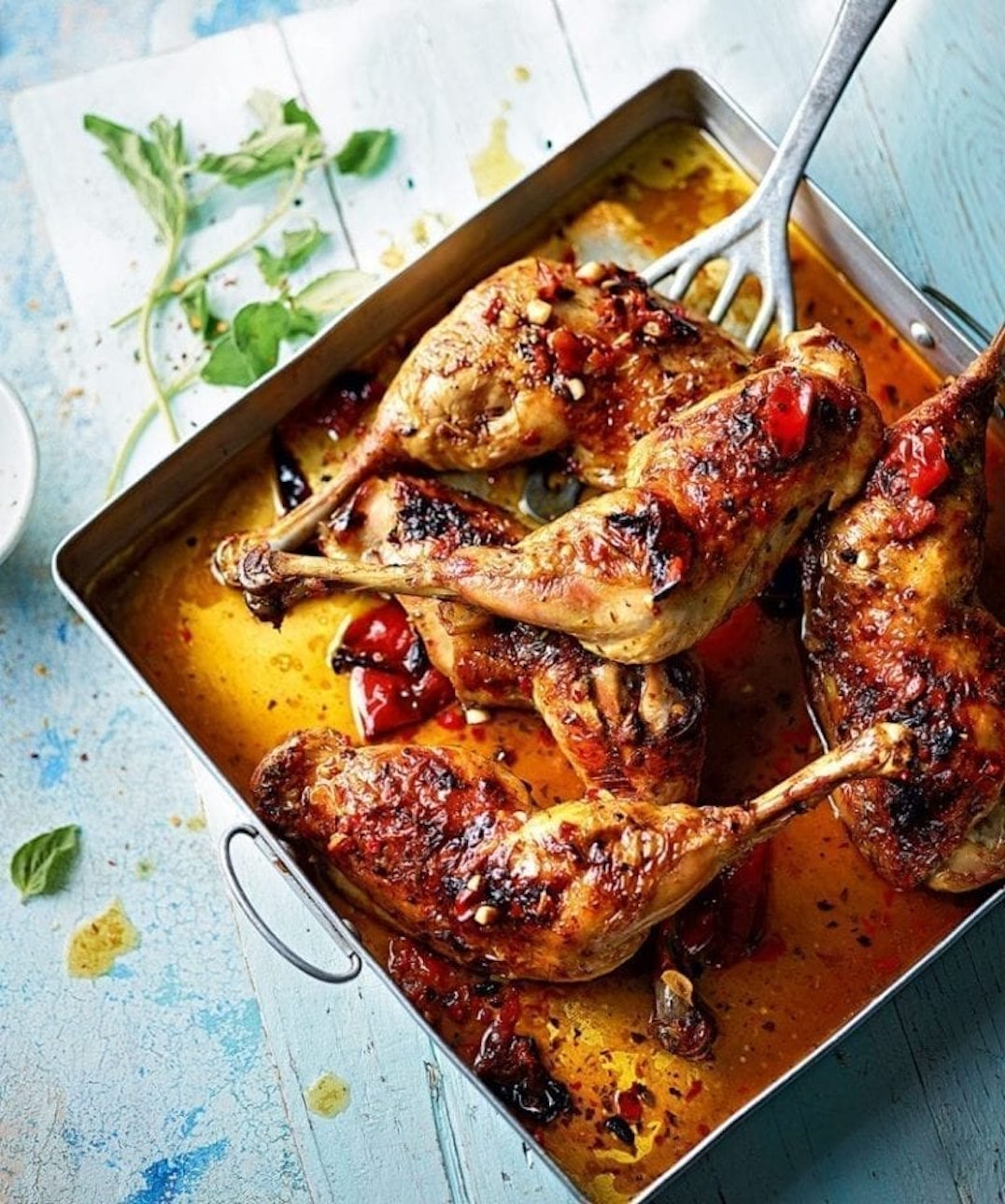 Oh how our love for Diana Henry grows and grows. There are few cooks who hit the big flavour notes while keeping recipes so simple and realistic with as much easy aplomb as her. This dish, inspired by Diana’s very first family holiday spent in Portugal, does exactly that. It is unfussy, warming thanks to the chilli flakes, easy to knock up and feeds a hungry crowd. Plus, good dried oregano will never not transport us to the Atlantic coastline. Ideal in any season; serve with salad and bread in summer; potatoes and bread in winter. 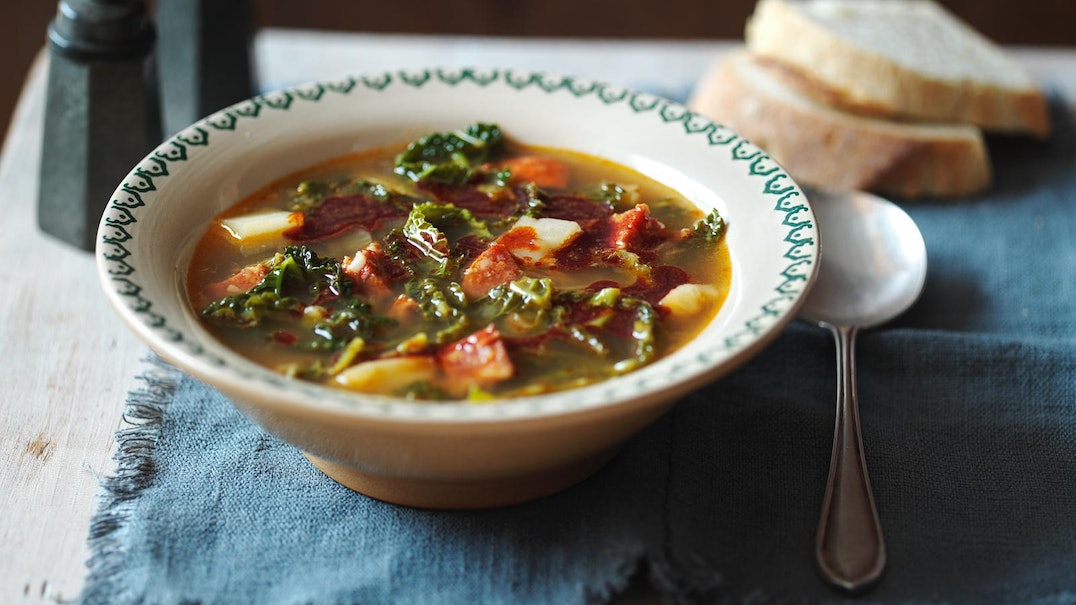 Now, we know what some of you might be thinking: this is, after all, at heart a recipe for cabbage soup. A divisive vegetable, it is all the more so for anyone who ever misguidedly embarked upon – and was thus inevitably scarred by – the cabbage soup diet (in which the person eats nothing but cabbage soup for a week. Even for breakfast). This recipe, however, turns all that on its head, made as it is with delicious smoked paprika, chorizo and potatoes. Served all over the country, it originally hails from the north and is considered one of the seven wonders of Portuguese gastronomy. Trust us, it’s easy to see why upon tasting this beauty of a warming soup. 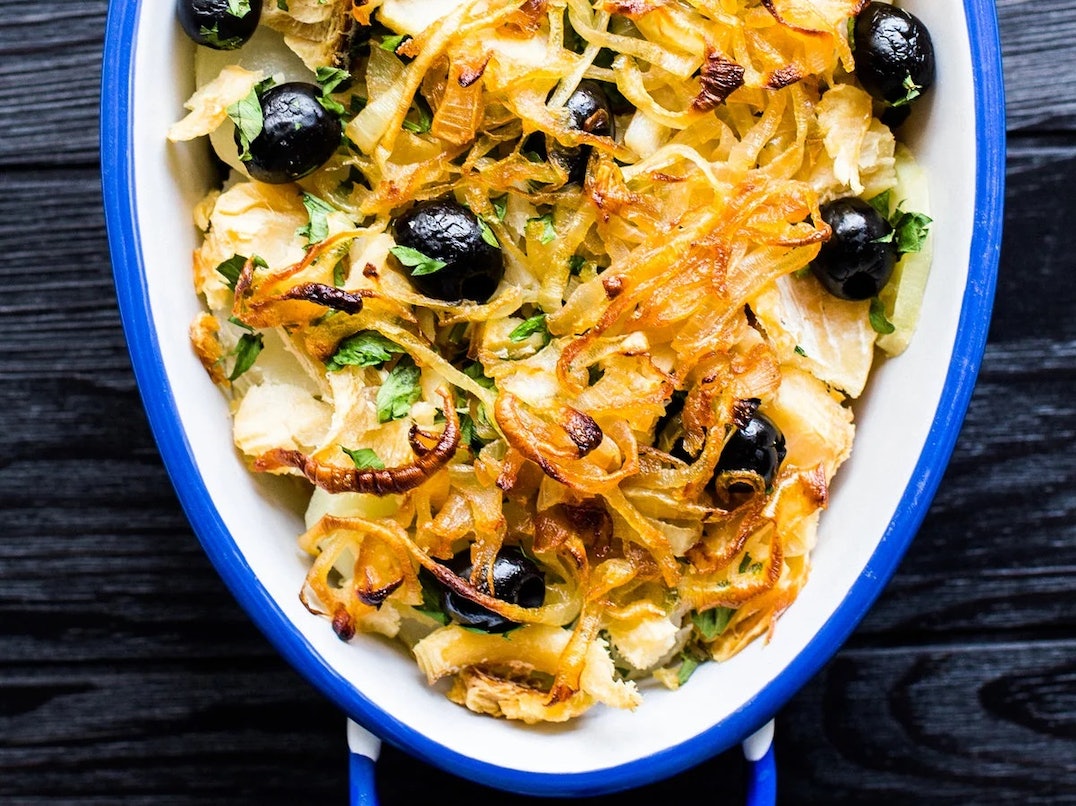 Widely considered to be Portugal’s national dish, it doesn’t get much better than this salt cod. The ultimate comfort food, it actually contains relatively few ingredients, though do note it’s not one to whip up without any preparation, since the cod needs to be soaked overnight. It is eminently worth the extra effort: the simple, hearty and nutritious tastiness is unparalleled. It is also an ideal recipe to keep for Christmas Eve; it’s festive and warming enough to be equal to the event, without being so stodgy as to put you off the following day’s sheer onslaught of food. Gorgeous. 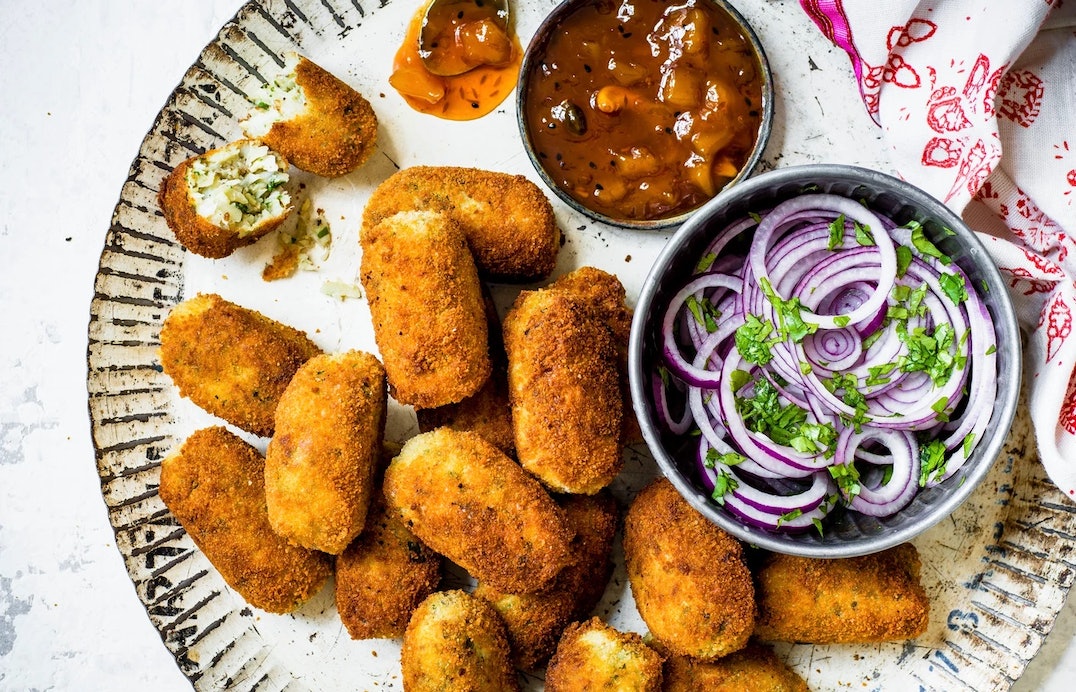 Got some salt cod left over? Why not make these extraordinarily good fish fofos? This recipe, by Maunika Gowardhan, gives the Portuguese classic a Goan makeover – and like all the best dishes, it proves more than up to such a twist, especially one so tasty. 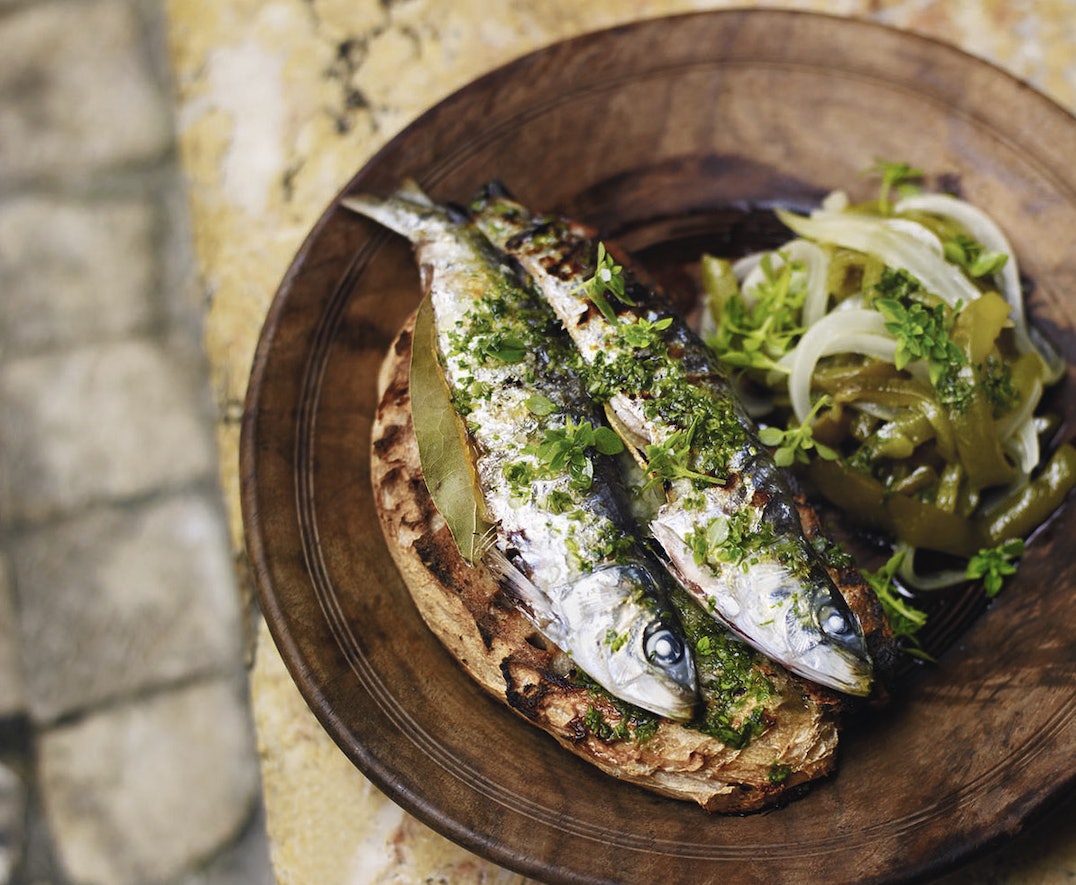 As the great Nuno Mendes explains here, sardines are always cooked whole in Portugal. After all, when an ingredient is so perfect, why mess with it (though he takes care to debone his). We love the confident simplicity of this kind of cooking, which works well all year round (in winter, eat it with plenty of olive oil-drizzled potatoes). A word of warning from Nuno, should you be lucky enough to be preparing these on an unseasonably sunny day by the seaside: ‘When I tried to cook this sardine dish recently, the first thing I did was put the prepared fish next to the grill—which happened to be on a roof terrace in downtown Lisbon— before turning my back for a minute. Big mistake. I must warn you: don’t leave your sparkling-fresh sardines outside unattended, for the seagulls will get them. The thought of those greedy birds flying away with my beautiful fish still makes me laugh.’ 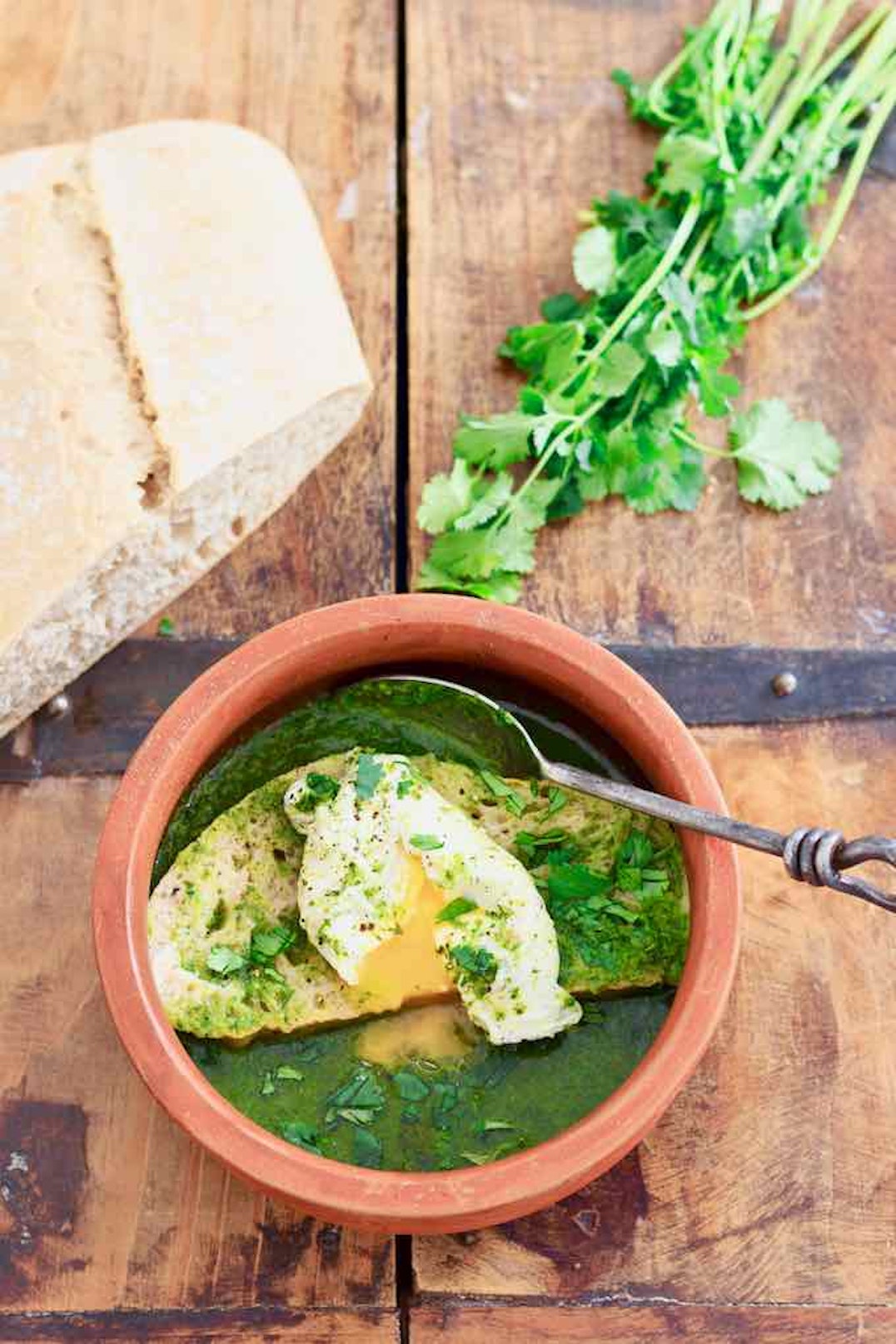 Açorda is made using just eggs, bread, olive oil, garlic, cilantro, water, and salt. And, like so many dishes whose roots are found in frugality, it cannot be bested for taste. One of the signature dishes of the Alentejo region, it was designed to keep hard-working bellies full, thanks to going heavy on the bread and eggs. For that same reason, it is a guaranteed hit for staving off cold and hunger in winter too. 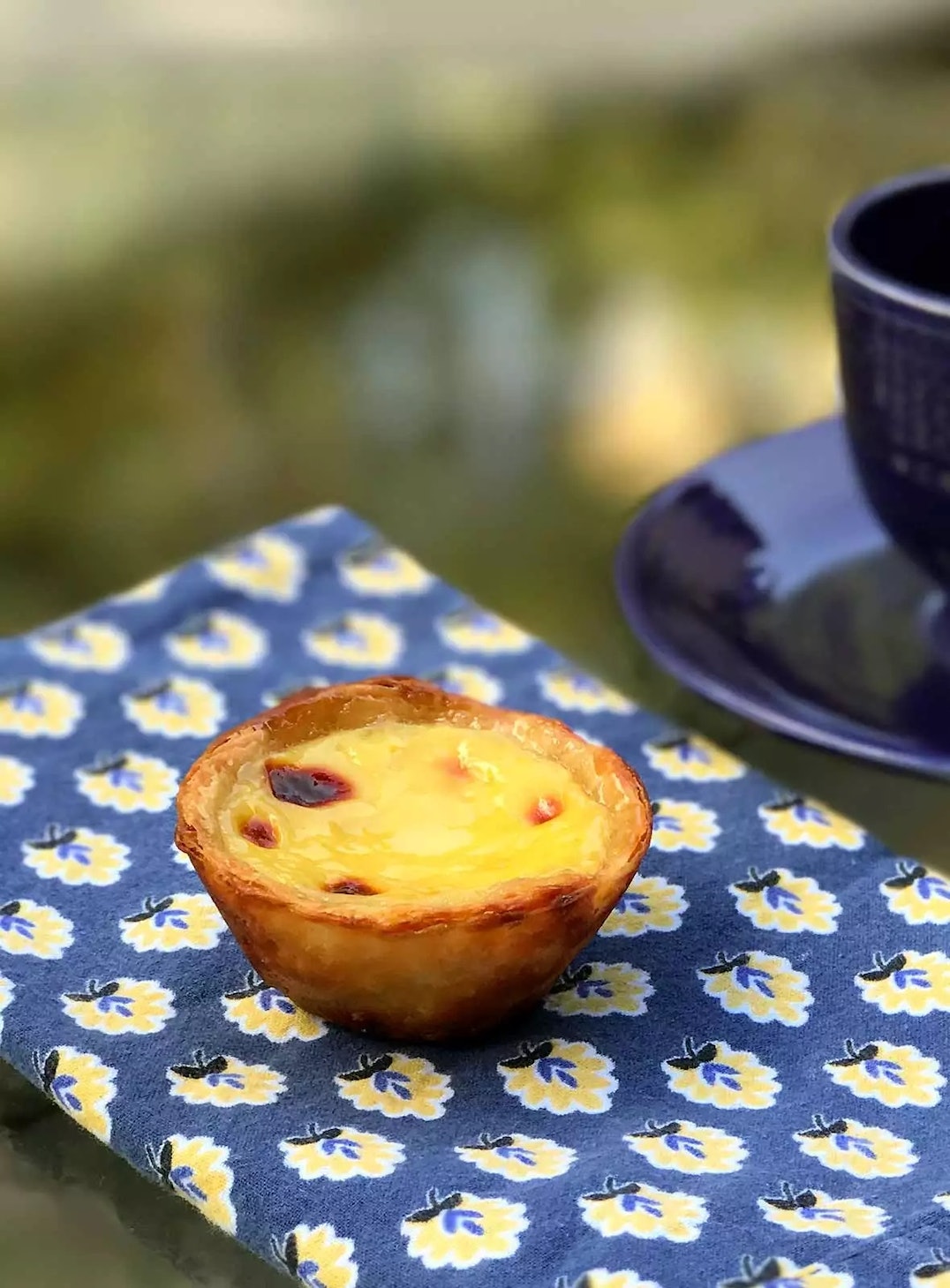 There are many, many mouth-wateringly spectacular Portuguese desserts to try. But chief amongst them has to be, of course, the famous Pastéis De Nata, custard tarts so heavenly that bakeries around the world routinely emulate them to guaranteed rapturous reception. And yet the true authentic recipe is still a guarded secret, originating in Lisbon’s Antiga Confeitaria de Belem, which makes some 22,000 of the beauties each day in ovens turned up to 800 degrees. Here, the excellent David Leite advises how best to achieve a near-perfect rendition at home. As he describes, the rules are few and simple: ‘When making the pastry, make sure the butter is evenly layered, all excess flour is removed, and the dough is rolled very thin and folded neatly. As for the custard, you’ll need a thermometer to accurately gauge the custard. These are best eaten warm the day they’re made.’ In truth, there was never much chance they’d stick around longer than that anyway.

The Home Cookery Year author digs into her digital loves.

With lockdown becoming the norm, more of us are cooking at home and in need of the right utensils.

Snapseed to sowing seeds: dig into the digital life of the chef, author and food writer 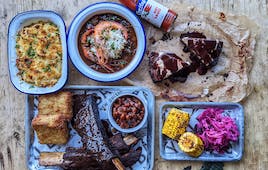 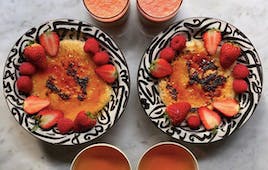 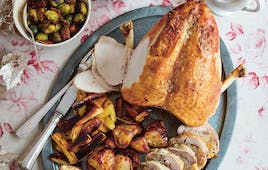 Feast Your Eyes On The Twelve Cookbooks Of Christmas 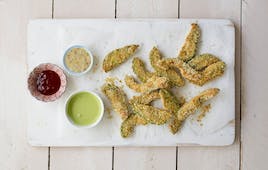