Six Ways With A Pumpkin

Bloggers and recipe sites from around the web show us what to do with the season’s smashing pumpkins.

There can be few sights that herald the arrival of autumn more gloriously than great piles of pumpkins, whether you’re harvesting them yourself, or simply picking one up on your supermarket dash. Typically destined to be carved out into all manner of grotesque gurning faces for Halloween, they can also look spectacular in the kitchen – or dotted about the doorstep – amongst armfuls of other squashes, big and small, orange and green, and left au naturel. But pumpkins are, of course, not just decorative. Stuffed full of vitamins A and C, they also pack a big, warming flavour punch too and, from their flesh to their seeds, are winningly versatile. They can go sweet, they can go savoury; so, how will you eat yours? Here’s our pick from around the web.

Naturally Ella’s Pumpkin Tarts
Ella, the powerhouse behind this fantastic online recipe resource, has been blogging about what comes out of her kitchen since 2007. Prior to that date, had anyone suggested to her that she might become one of the leading food bloggers on the World Wide Web, she’d most likely have laughed you out of town. Having grown up on a diet of fast food and been overweight for her entire youth, she had a dual wake-up call: first her father suffered a heart attack, swiftly followed by her own health issues whilst at college. Ella knew that for her there was only one road to getting into shape: to reject processed foods and opt for natural produce, the kind that our bodies were actually designed to eat. Duly, she restored herself to health without counting calories and concentrating instead on whole foods. Today, you can search her vast repository of recipes by ingredient, or by the type of food you’re after. 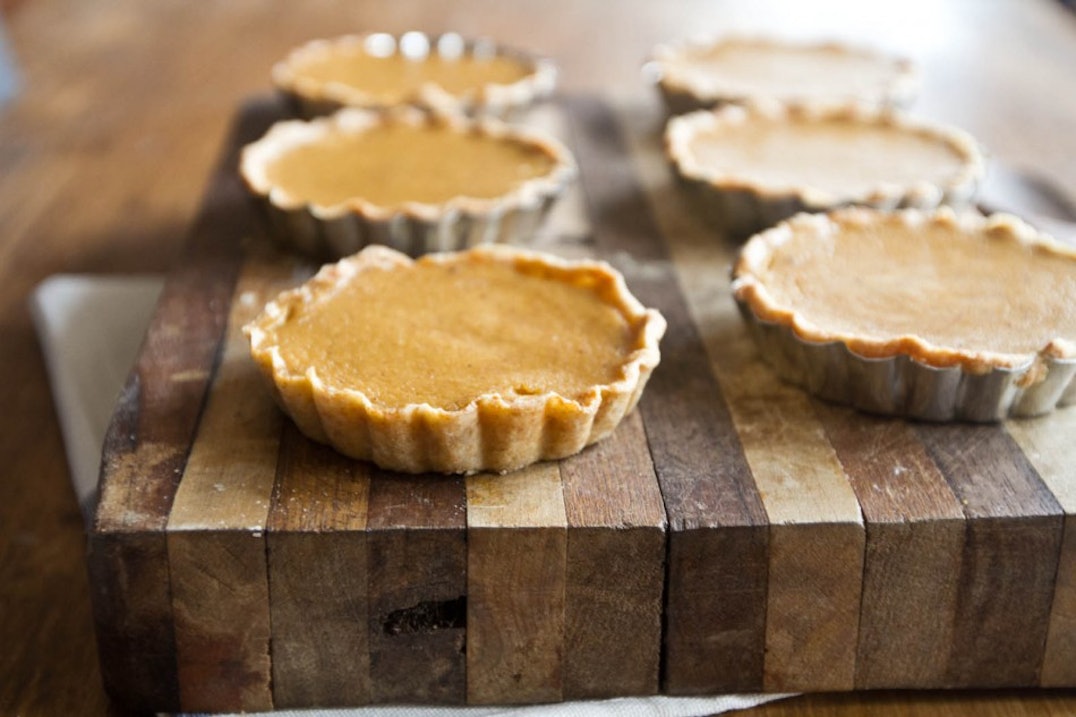 For this time of year, we adore these cute mini pumpkin pies, which use up otherwise discarded scooped-out pumpkins, and contain whole-wheat pastry and no sugar (sure there’s some double cream in there, but these are only teeny-tiny mouthfuls of autumnal joy, people). As she writes, they are super easy to make, bite-sized, perfectly portioned puddings that require not a single ounce of guilt. And for the social culinary sharers amongst us, they’re Insta-perfect too.

Pinch of Nom’s Baked Pumpkin Cheesecake
Even if you weren’t an early disciple of the Pinch of Nom website, the existence of Kay Featherstone and Kate Allison’s fresh approach to healthy eating cannot, by now, have escaped your notice; their first book sold a record-breaking 210,000 copies in its first week. It graces the window displays of all major book shops and even if, like us, you find that the use of the word ‘nom’ brings you out in hives, there’s no doubt that Kay and Kate, who ran a restaurant together in the Wirral and hit upon the idea when pursuing their own weight loss aspirations, are onto something. 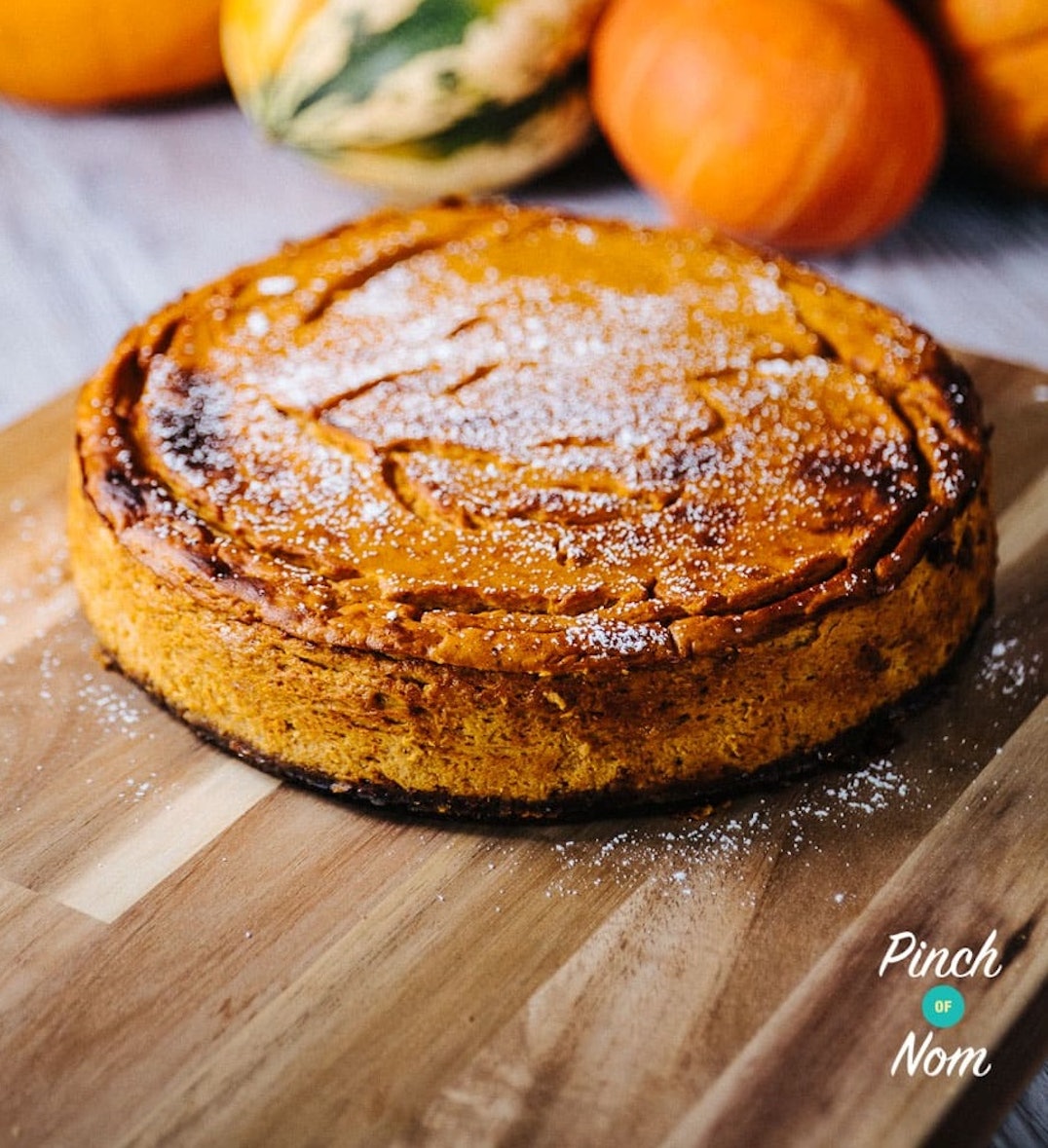 Every recipe has been developed by the duo to come in at under 400 calories, including accompaniments, whilst never compromising on taste. Flying in the face of prevailing modern ideas that prize whole foods and fats, it uses low-fat replacements to meet the lower calorific requirements. If this baked pumpkin cheesecake, which is 140 calories a portion, is anything to go by, we’re on board. This is cosy comfort food, which uses up ingredients in our autumnal kitchen, at its very best.

Olive Magazine’s Pumpkin Seed Butter
One of the joys of pumpkin is how versatile it is. As well as, of course, making the perfect hollowed out Halloween lanterns, in the kitchen they can be sweet or savoury; can take a hefty addition of spice in the form of chilli or ginger; and, finally, they even give us their seeds to work with.

A handful of toasted pumpkin seeds are rarely a mistake when adding crunchy texture to a salad, but there’s no reason to save these joyously nutty and healthy seeds for lunch or supper. We love the all-out nutty breakfast extravaganza that is pumpkin butter atop rye bread. The recipe suggests an optional date nectar for sweetness, but we’d take it as it is, in its naked healthy yet comforting glory.

A Mummy Too
Emily Leary started out as a consultant with her finger in lots of pies. That turned out to be literally true in 2011 when she began documenting the food her family ate for her blog, A Mummy Too, so named in recognition of the fact that she was spinning a dizzying number of plates, and still managing to bring up her children at the same time. But that all changed when she shed the plates in favour of the pies, and opted to work on her blog full time. She writes about family life in general – travelling with kids, good family days out in the UK, her recommendations for children’s books and toys – but, in truth, it’s the food we come for. 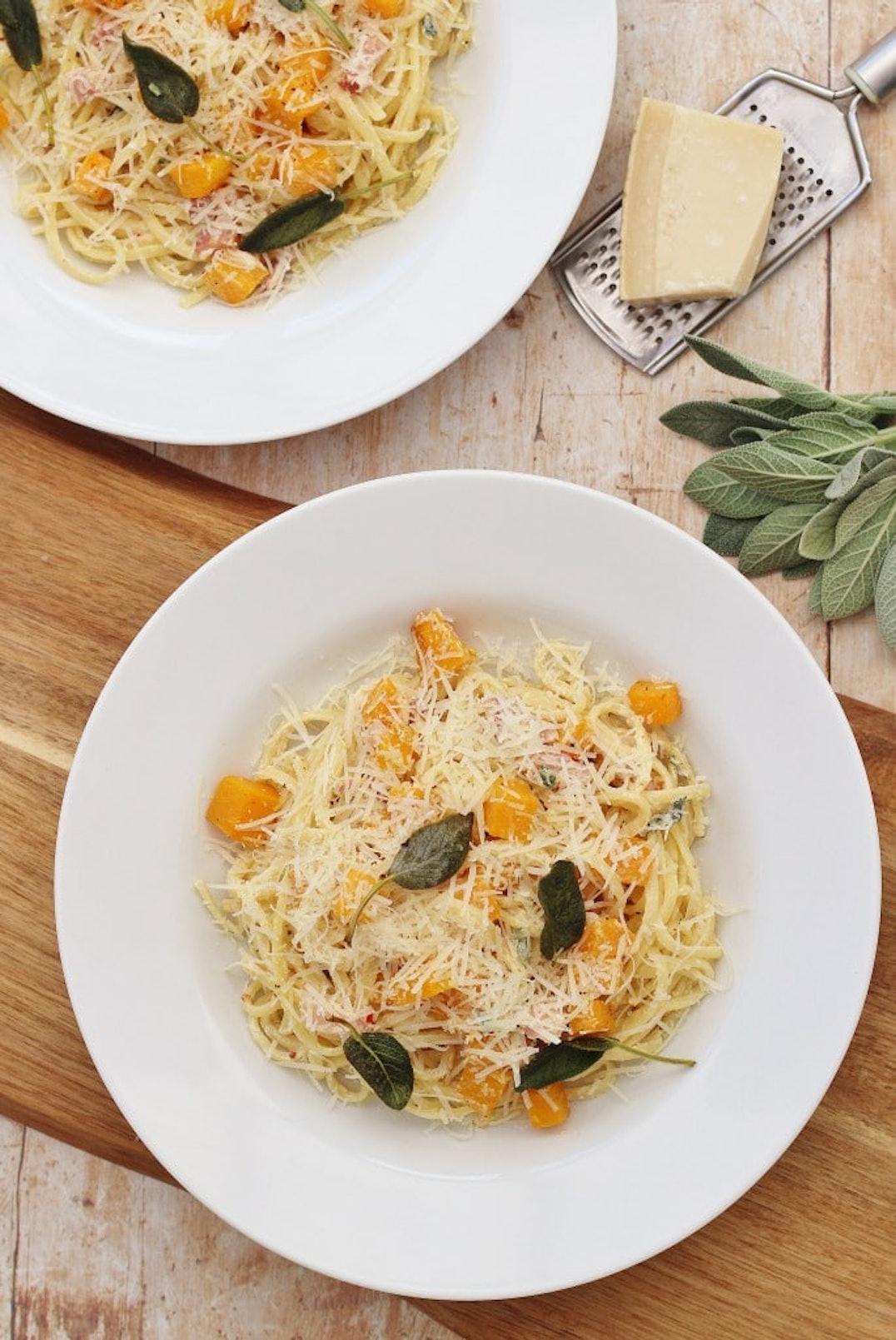 We like her easily navigable recipe index and its comprehensive set of headings for everything you could feasibly want to eat, ever. And we love that she loves pumpkin like we do. In fact, she loves it so much that last year she collated a whole pumpkin special with eight of her favourite tried-and-tested recipes. Pumpkin lattes are intriguing stuff, but it’s the bacon, sage and pumpkin pasta that has us eyeing up the carving pumpkin we’ve got in early this year.

Jamie Oliver
The pukka king of lovely jubbley nosh hardly needs anything by way of introduction. Discovered at the tail end of the nineties as the cheeky chappy at the pass in the legendary River Café, the ‘Naked Chef’ emerged, eventually managed to get himself dressed and become one of the country’s best-known chefs and cookery writers. Today he’s the owner of a string of Italian chains; a champion of underprivileged aspirant chefs; and a campaigner for better food in schools. 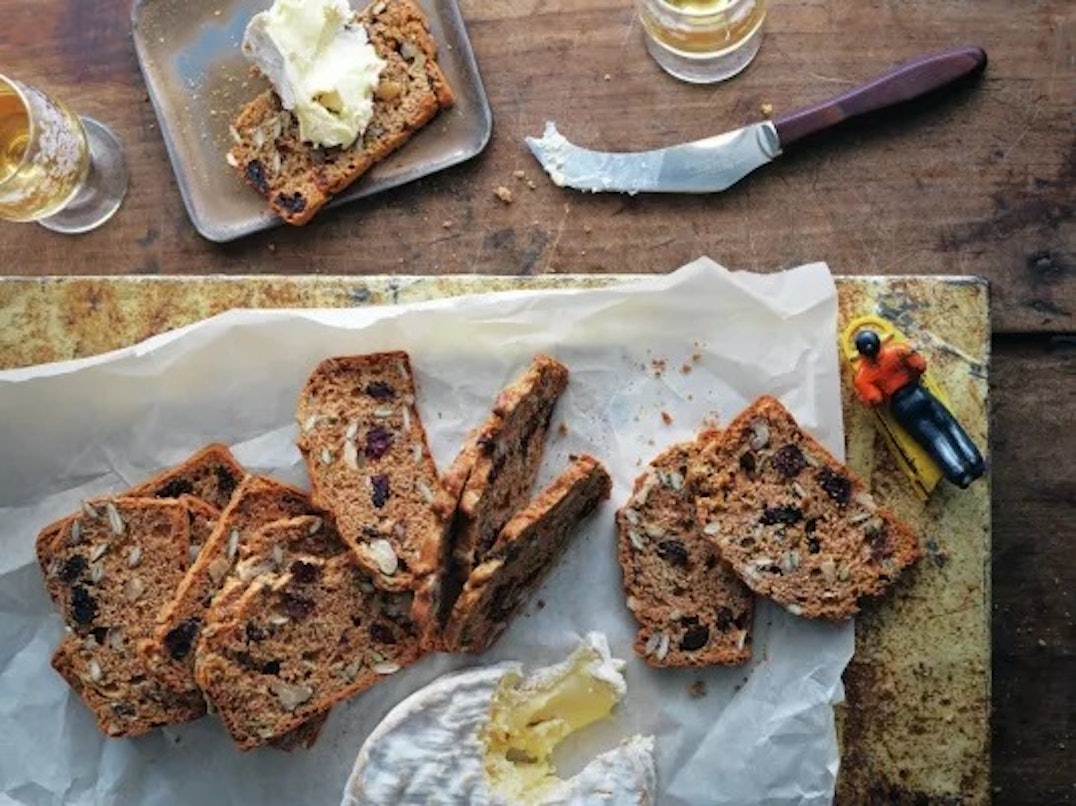 We’re big fans of his recipe for cranberry and pumpkin seed crisp breads. They’re easy to make, super tasty, and make quite a show-offy little number at dinner parties, where they work well with whatever you’re serving at your cheese course. ‘These crisp breads? Oh, just a little something I rustled up myself...’

Love Potatoes’ Pumpkin and Potato Soup
Oh we love this blog from AHDB Potatoes, the sole purpose of whose existence is to promote the humble British-grown spud and to encourage people to cultivate their own. And since autumn is all about root vegetables, we couldn’t adore this marriage of two of our favourites to hearty, filling and warming soup effect more. 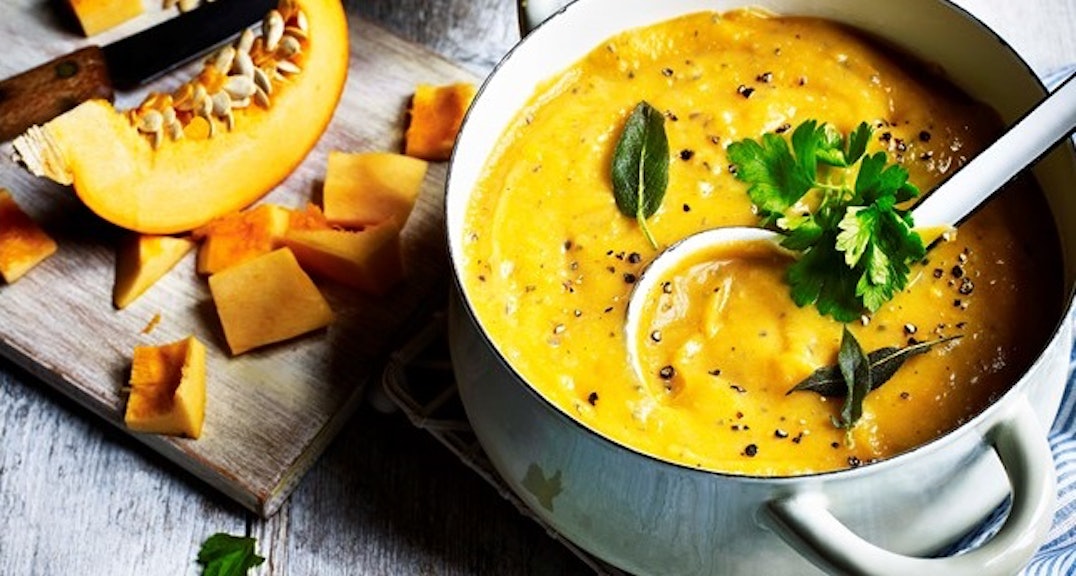 This creamy pumpkin and potato soup is the stuff of pure comfort, lent a bite by the sage (we like ours crispy) and garlic. Serve it up with a hunk of crusty bread. Et voila: autumn in a bowl.

Anna talks about Farmdrop, which launched in 2012 and now has over 30,000 customers who are eschewing supermarkets for this online platform connecting consumers with producers.

Dust down your tongs: it’s barbecue season again. We round up nine of the best to buy.

As the scariest ghouls prepare to come out for All Hallow’s Eve, don’t give yourself a fright by leaving it to the last minute. 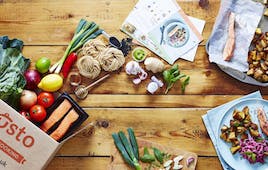 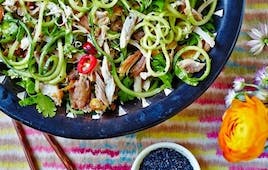 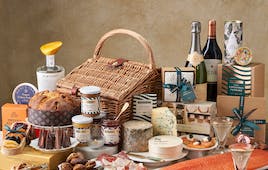 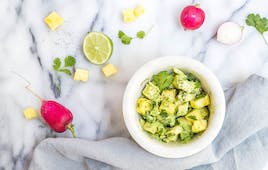 7 Gorgeous Dips To Eat By The Spoonful