Jamie Oliver stormed onto the culinary map at the tail end of the 20th-century with his cheeky chappy style and his palpable enthusiasm for both Italian and British cuisine. Innumerable books, TV shows, restaurants and campaigns have followed, as has a beloved recipe site that is jam-packed with ideas for both quick weekday dinners and more lavish repasts.

Much as we love him, the king of the pukka dish is, however, not alone. Other chefs with strong Italian influences abound, and whilst we’ll always love Jamie, let’s just say that our relationship is no longer exclusive. Here’s our pick of eight of the best.

Rachel Roddy
Rachel Roddy describes herself as a ‘home cook who writes’. That self-deprecating account belies the fact that the cook, blogger, photographer, author and columnist has scooped a myriad of awards for her regular writing and recipes in The Guardian and is also a best-selling cookery book writer. Indeed, her two tomes, Four Quarters and Two Kitchens, contain the kind of morsels that have you drooling like an idiot in Waterstones. Having grown up on the south coast of England, she later trained as an actress, but Rachel knew deep down that her calling was to tread the same path carved out by her hero: the inspirational Elizabeth David. Deciding to ditch the thespian stuff and travel to gain some time to consider her future, she ended up in Testaccio, an off-the-tourist-trail quarter of Rome best known for its food. 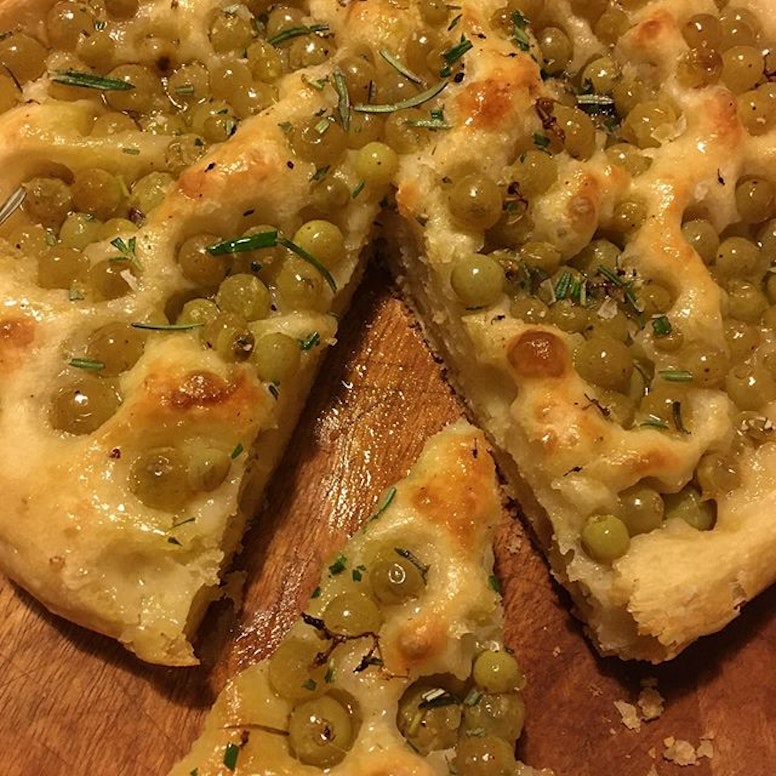 There she began to make sense of the place by writing about, and cooking its cuisine. She never left; now based in Rome full time, we just adore her Instagram feed, which fills the little squares (and our minds) with thoughts of lesser-known Italian dishes – think sweet and sour pumpkin, and a sublime-looking focaccia with grapes. Heaven.

Gennaro Contaldo
‘There’s nothing Gennaro doesn’t know about pasta. He’s an absolute legend.’ That ringing endorsement comes from Jamie himself, and indeed Gennaro is the man that the pukka king of cheeky-chappy Italian cookery credits with being his food mentor. Hailing from the Amalfi coast, the pasta guru came to London and, along with many who would go on to become great chefs in their own right, worked for the legendary Antonio Carluccio in Neal Street, when there was still a buzz surrounding what has latterly become a nationwide chain. 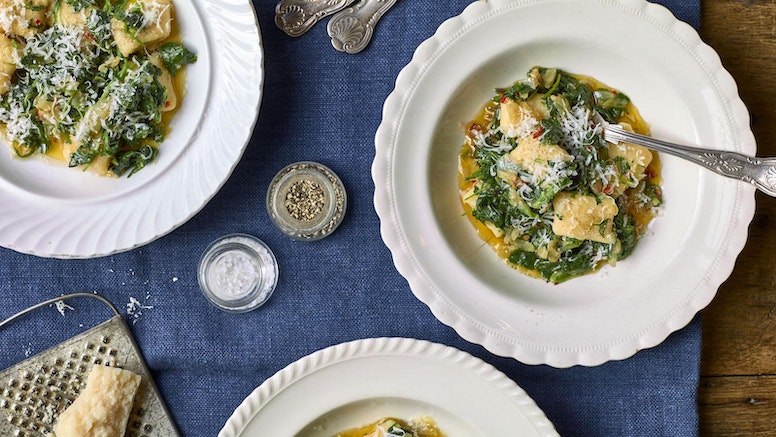 In 1999, he went on to open his own restaurant, Passione, which was garlanded as the best Italian eaterie in the capital. Since then, he’s become famous as the man who taught Jamie Oliver everything he knows, and is now a well-known face on television shows like Saturday Kitchen. The recipe section on his website is a little clunky, but no matter. When we want to feast our eyes on Gennaro’s foodie inspiration, we head over to the BBC’s webpage dedicated to his creations. We’ll never tire of his Gnocchi with Wild Rocket. Simple and beautiful.

River Café
If Gennaro Contaldo can lay claim to having finessed Jamie’s education in Italian food, then Rose Gray and Ruth Rogers must be credited with having started him off. The duo gave him a job at their globally famous The River Café in London, and it was thanks to a documentary in the restaurant’s kitchens in the late 1990s that Jamie’s natural persona and talent in front of the camera was discovered. Ruth and the now sadly late Rose gave him many of the tools he would need for his fresh, seasonal and simple approach to Italian cooking. The two trailblazing women were famed for their assiduous research trips to Italy, and indeed Ruth continues to make regular journeys for menu inspiration, and to find new regional dishes eventually destined for the Richard Rogers-designed, Michelin-starred eaterie. 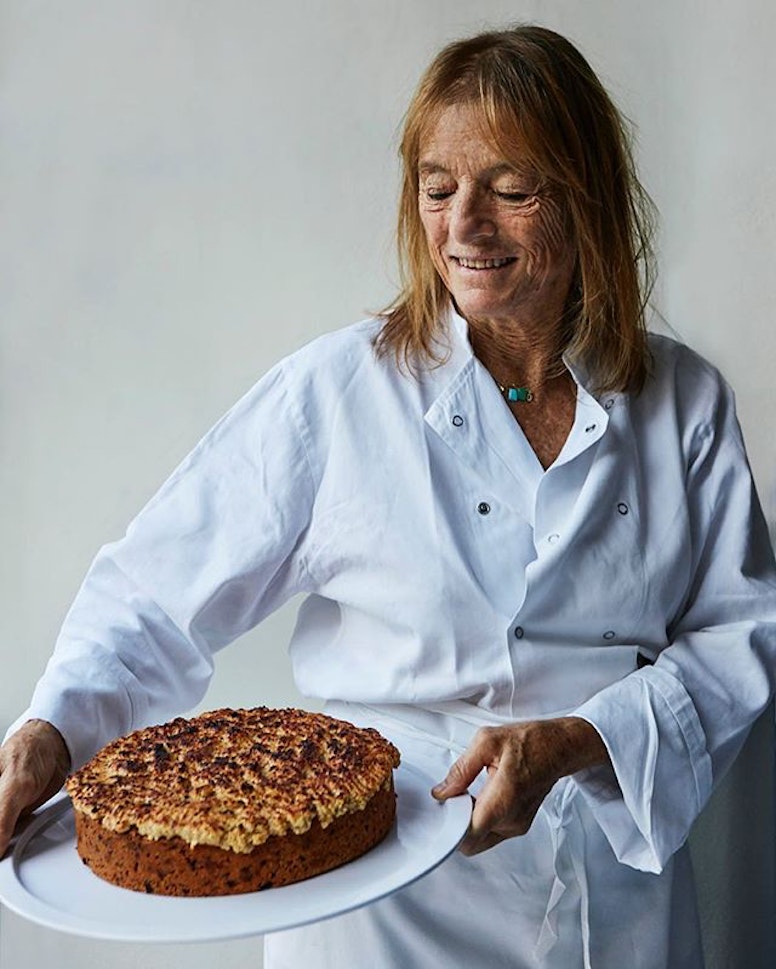 Although occasionally criticised for its eye-watering prices, the ingredients-driven approach is hard to argue with and the food is reliably sensational; the classic numbers – Spaghetti with Lemon, and the world-renowned Chocolate Nemesis – are talked about in reverend terms of hushed awe. But you don’t have to re-mortgage the house to eat its wonderful food. We love the recipe videos on the website, such as Ruth making Polenta Porcini, as well as the sumptuous Instagram feed, with inspirations such as this lovely Italian Christmas cake.

5 O’Clock Apron
Jamie’s predilection for Italian food runs strong, but he also grew up in an (excellent) Essex pub, and so his love of good classic British comfort food comes a close second. 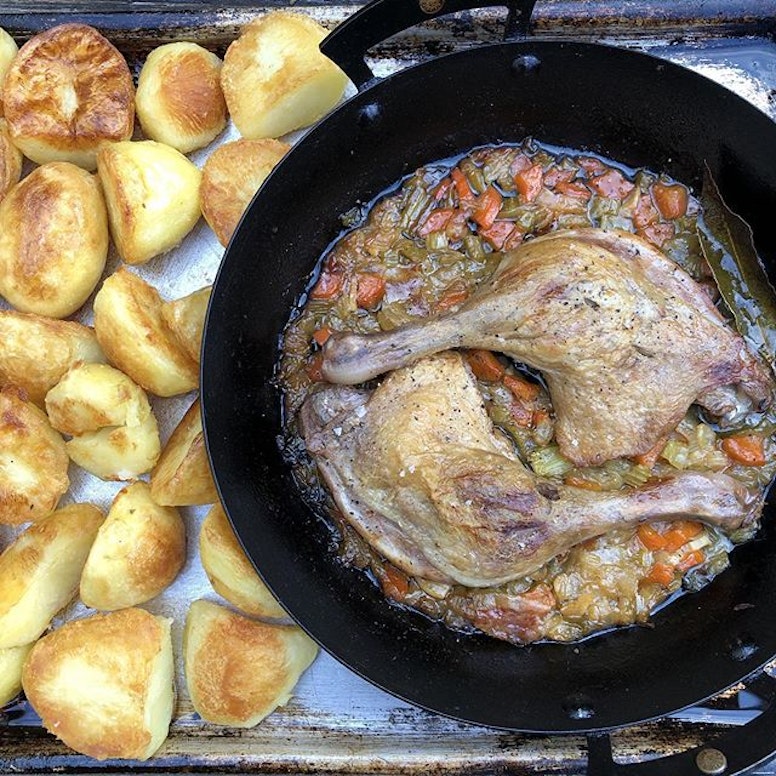 We like that he can mix it up, which is why we’re also fans of 5 O’Clock Apron, aka Clare Thomson, a South African-born, Bristol-based food writer and cook, who contributes to The Guardian, Countryfile and Olive Magazine and is ‘almost always in an apron.’ 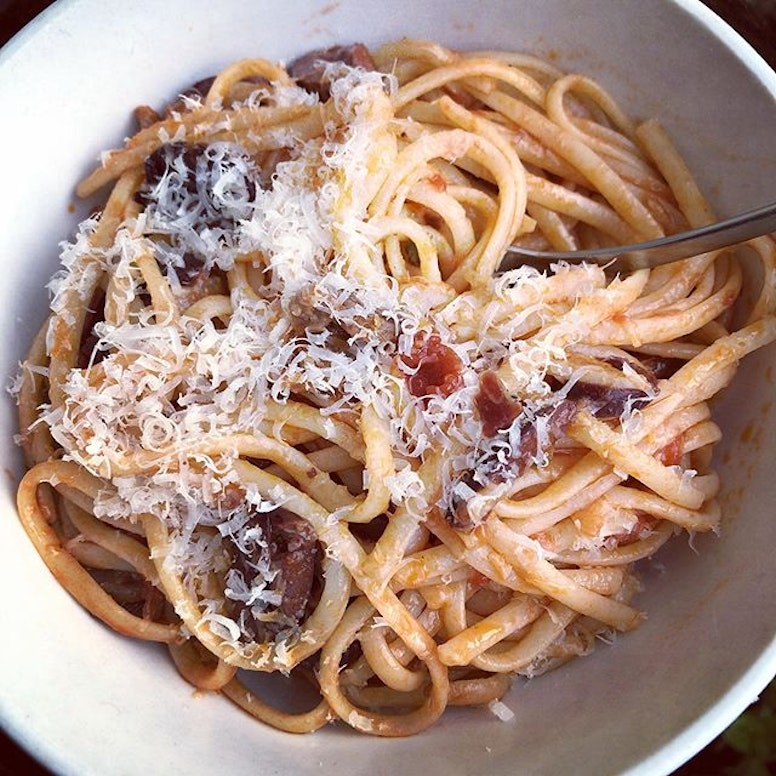 On her Instagram feed, you’ll find everything she cooks for her young family, from traditional slap-up roasts to simple tomato pastas and hearty stews. Like Jamie, a pluralist with an abiding love for family-friendly good grub.

Francesco Mazzei
Chef Francesco Mazzei attributes his dizzyingly successful career as a chef to a pair of Levi jeans. Growing up in Calabria, he was more interested in Italy’s other national pastime, football, than in cooking. But lusting after some American denim, he began work, at the age of nine, in his uncle’s gelateria to save up. At 14, a meeting with renowned chef, Angelo Sabetta, made him take his new-found skills in gelato and cake-making seriously, after impressing the gastro legend with one of his sweet creations. 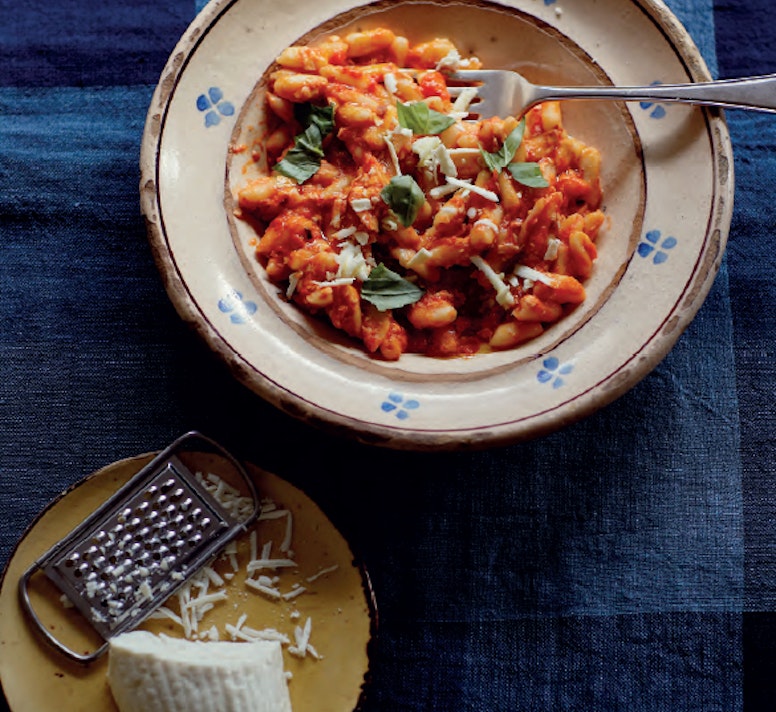 Fast forward a few years, and Francesco would flit between Michelin-starred restaurants in Rome and London, where, in the latter city, he landed a job at The Dorchester before opening his Santini restaurants in Edinburgh, London and Milan. Later, he launched the much-lauded L’anima; introduced (as a consultant) n’duja, the southern Italian spicy sausage, to Pizza Express, and thence the rest of the country; and finally took up the reins at Sartoria in Mayfair. It’s all high-end stuff, but we love the disarmingly simple recipes on his website. 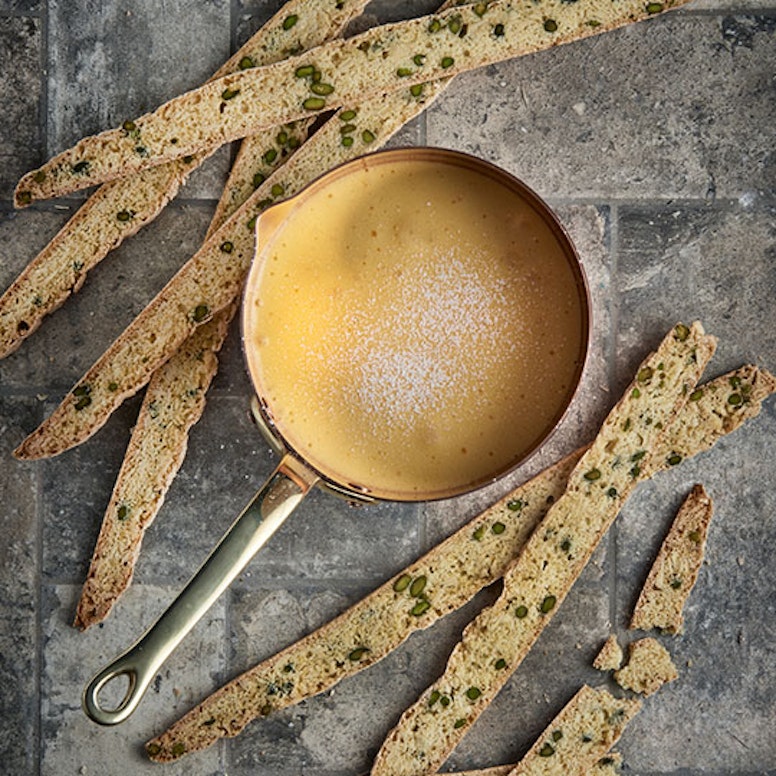 Zabaione with Cantucci is an impressive yet simple dinner party staple of ours already, and we love the Calabrian Cavatelli, N’duja, Tomatoes and Aged Ricotta, not least for the fact that he’s the man who brought that now ubiquitous spicy sausage to this country.

Anna Del Conte
Anna Del Conte describes herself as ‘Britalian’ and is the absolute doyenne of Italian cooking. In 2011, she was garlanded with a lifetime achievement award by none other than Nigella Lawson. She doesn’t have her own website – she’s old school, she doesn’t need to – but we still spend many a happy hour cooking under her tutelage thanks to websites that feature a lot of her work, from the Happy Foodie’s dedicated page to the BBC’s Anna Del Conte section. 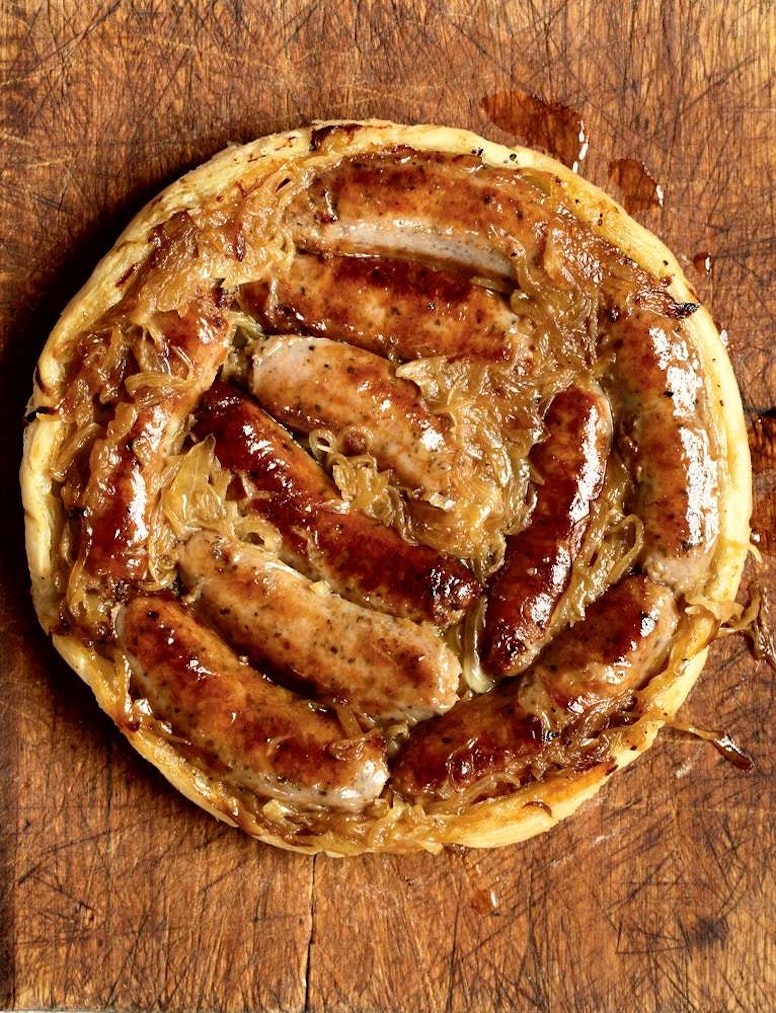 The author of Portrait of Pasta and Secrets of An Italian Kitchen, she is lauded for having raised awareness of Italian cuisine in this country since her arrival here from her native Milan in 1949. She’s won too many award to mention and now lives in Dorset with her family where, one can only imagine, an invitation to dinner must be a locally prized thing. 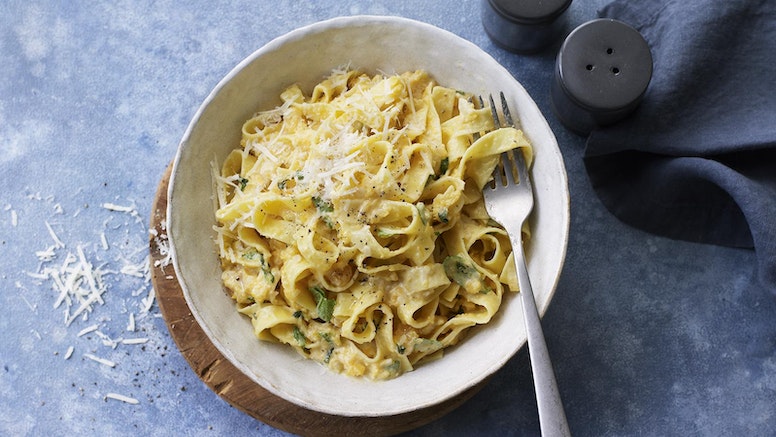 Her Upside Down Sausage and Onion Tart is what comfort food is all about, and this autumn, we’ll be whipping up her Butternut Squash pasta a minimum of once a week.

Food52
For sheer comprehensiveness, the good-looking Food 52 deserves a mention, and, like with Jamie’s prolific output, there’s dish for pretty much anything you fancy here. The site was created over a decade ago with the aim of bringing together cooks from far-flung corners, all under one roof. So named because these seasoned cooks are in their kitchens every week of the year, Food52 is no amateurish site; it has its own test kitchen for trying and testing out each and every recipe submitted by its community of cooks. 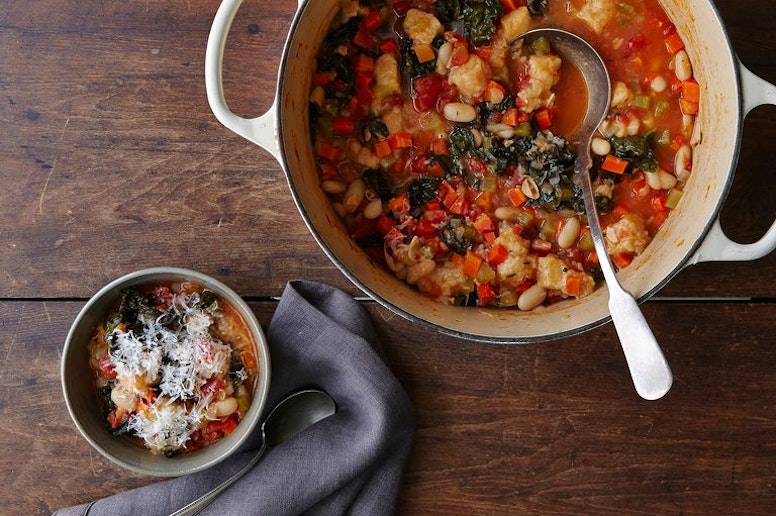 Its recipes and articles are James Beard Award winning, its cookbooks are New York Times bestsellers, and its Instagram has some 2.4 million followers. You can search the website by ingredient, meal type, cuisine, special occasion, and dietary consideration. Recent favourites in the Jamie vein include this hearty Tuscan Ribollita and Leg of Lamb with Garlic Sauce.

Nigella
There are few foodie figures that match Jamie for go-to searchable jam-packed recipe archives; for sheer achievable tastiness; or for being recognisable by their first name alone. Nigella, however, equals him on every score. Emphatic that she is a cook, not a chef, the distinction works well since her suggestions are not intimidating and use ingredients that you typically have at home (no searching for obscure items stocked by one lone shop in the land here, thank you). 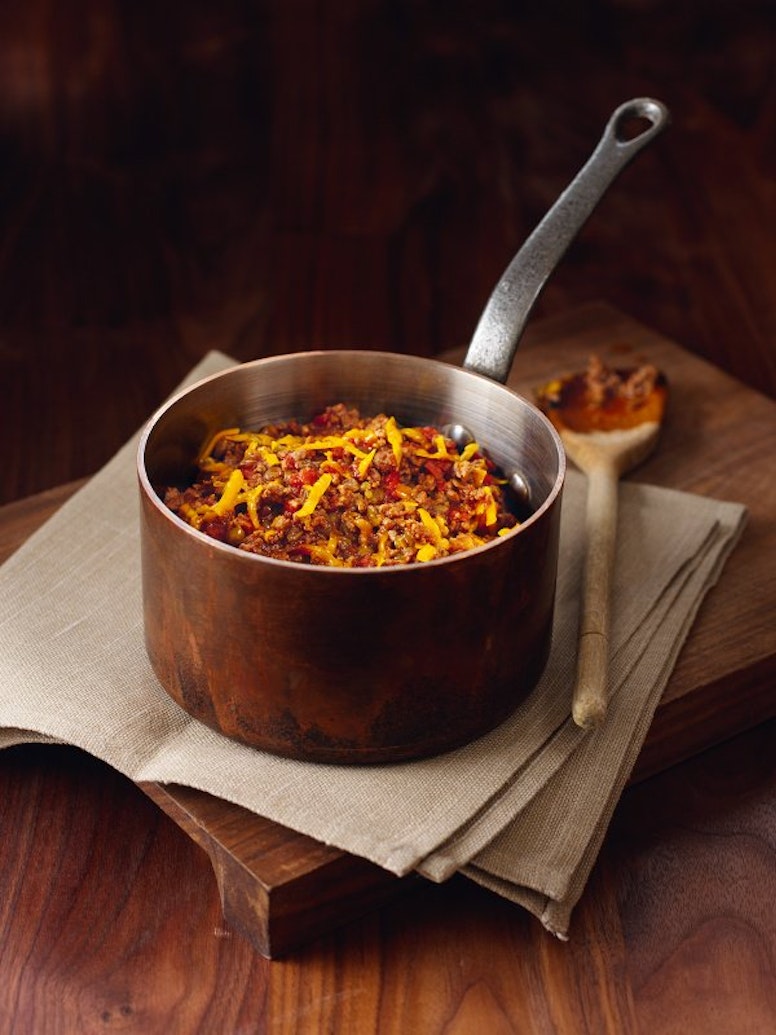 There is much to love here, but one of our favourite fail-safes is her Rapid Ragu, an indispensible dish for cosy nights in by the fire. 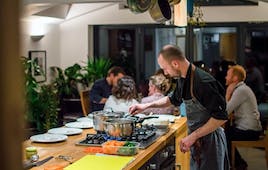 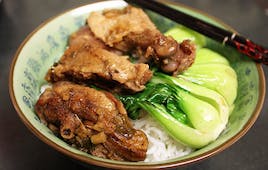 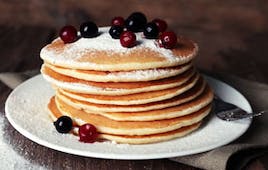 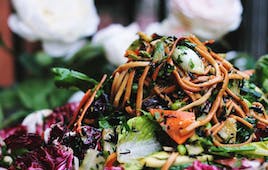