Birthstone Jewellery: How to Accessorise According To Your Birthstone

Buying or receiving a piece of well-considered jewellery should always be special and meaningful. As a gift, it is deeply personal and made to last forever and, at its best, destined to one day be handed down the generations. Gemstones can really elevate a piece of jewellery – and what better way to personalise your gift than by choosing the recipient’s birthstone as its main feature?

The tradition of birthstones stretches all the way back all the way to the first century, with the historian Jospehus recorded as having written of a connection between the twelve stones in the Book of Exodus and the twelve months of the year. Although birthstones no longer have a connection to their early religious context, the tradition has nonetheless been upheld centuries later; in 1870, the iconic jeweller, Tiffany & Co, published a set of poems attributed to an unknown author, matching each month of the Gregorian calendar with a birthstone.

Wearing your birthstone is said to unlock beneficial properties in the stone, with most stones offering healing and some also offering you protection. They are also said to bring luck to the wearer. Don’t, however, feel you always have to wear your own birthstone — as all things in life, do choose what feels right for you.

Whether you are buying for yourself, a dear friend or family member, or for your beloved, a birthstone is a really special choice. Where to start in your search for star sign jewellery, though? Read on to discover which stones represent each month of the year; where they originate; what the birth stone colours look like; and what benefits they can purportedly bring the wearer.

People born in January – who are Capricorns up until the 20th of the month and Aquarians thereafter – have their vibrant personalities reflected in their birthstone: garnet. The word has its origins first in Latin and later in Middle English; the former’s ‘granatum’ – meaning ‘seed’ – refers to its resemblance to the jewel-like pomegranate seed, while the latter’s ‘gernet’ – meaning ‘dark red’ – refers to its rich hue. Do note that garnet can come in a variety of colours, though the mineral itself remains constant. Said to signify eternal friendship and trust, it makes a particularly excellent present for a good friend whose birthday so happens to be in January.

Those born in February – Aquarians until the 20th of the month; Pisceans thereafter – rejoice in the birthstone of amethyst, a beautiful purple gem that can manifest in a whole range of shades, from the delicate and light to the deep, rich and opulent. Worn by royalty and clergy throughout history, amethyst was once more valuable even than diamond. The ancient Greeks thought of it as a sobriety stone, thanks in part to the legend that Dionysus, god of wine, created it when he poured wine onto a statue of pure white quartz, thus lending it its violet colour, and bestowing upon it the power to prevent the intoxicating effects of alcohol. The Greeks even created wine goblets from amethyst in the hope that it would allow them to continue drinking while avoiding ill effects. Whilst we cannot, alas, vouch for that property, we can say that it is said to promote healing, and properties such as inner strength, stability, peace, courage, and balance.

What's the birthstone for March? Well you may ask, for those born at this intersection of winter and spring have not one but two to their names, in the form of aquamarine and bloodstone. Those with birthdays that fall this month are Pisceans until 20th March and Aries after that. Dreamy blue-green Aquamarine may be particularly appropriate for the watery former star sign, since it is traditionally believed to protect sailors on the high seas. Formed of the mineral beryl, it is cool, calming, soothing and said to inspire truth, trust and letting go. In mythology, it was also believed to have been the treasure of mermaids, a talisman of luck at sea, and a symbol of eternal youth. Meanwhile, the Bloodstone, an opaque polycrystalline chalcedony consisting of dark green jasper that features red specks, is March’s alternative gemstone. The ancient Egyptians believed that the bloodstone had the power to make its wearer stronger and more resilient in battle, and thus used it to make amulets and talismans purported to have healing properties.

As Marilyn Monroe once breathily sang, ‘diamonds are a girl’s best friend’. And if you happen to have been born in the month of April – whether you were born before the 20th and are therefore an Aries, or afterwards, making you a Taurus – that goes double for you. Said to symbolise eternal love, purity and faith, diamonds are unique and revered amongst gems for their ability to split white light into a rainbow of colour. The best-known diamonds are colourless, but they can, in fact, come in a spectrum of colours, including pink, green, yellow, blue and red, and to varying degrees of vividness. The preciousness of diamonds is thanks to how hard they are to source. That, allied with their meaning, makes them a perennially popular choice for engagement rings.

Those born in May, a mix of Taurus star signs until the 20th and Geminis thereafter, are represented by the exquisitely beautiful emerald. Popular particularly in Victorian jewellery, emeralds are still much-loved today, and it’s not hard to see why. Aside from their strikingly vivid colour, they are also thought to signify loyalty, faithfulness and friendship, while also offering healing properties for maladies relating to the spine, fertility, eyes and headaches.

While those born in March can pick a favourite of two gemstones, people born in June (Gemini until the 20th; Cancer after that) are spoiled for choice, with no fewer than three gemstones particular to the month: pearl, alexandrite and moonstone. Pearl, the only gem produced by a living animal, is said to signify luck and wealth. Alexandrite, meanwhile, is unique for its rare colour-changing ability (it is sometimes said to be ‘emerald by day, ruby by night’), and is classed as one of the newer gems, having only been available for a little under 200 years (it was discovered in Russia in the 1830s). It represents luck, prosperity, intellect and balance. And finally, moonstone, with its softly beautiful rays of gold, blue and purple, is said to nourish and awaken feminine energies.

Ruby, the birthstone for those born in July (Cancer until 20th; Leos thereafter), needs little by way of introduction. The word has its origins in Latin, coming from ‘ruber,’ which simply means ‘red’. The ruby’s deep red or pink hue, meanwhile, makes it an apt signifier of love, passion and romance, although it is also thought to represent health and wisdom, too. Indeed, the ancient Hindus believed that rubbing rubies directly onto the skin could improve blood circulation and boost physical and mental health. Discovered 2,000 years ago, rubies have been much sought-after ever since, and the redder colour, the more covetable the gem is deemed to be. Second only to diamonds in terms of hardness and durability, they can be worn daily and should last an eternity.

How about giving unto your beloved a piece of jewellery that started life in space? Well, with peridot, August’s birthstone, that is entirely possible. A beautiful and unusual olive green colour, it is formed from a mineral found in both lava and meteorites. August-born wearers (Leos until 20th; Virgos afterwards), will surely be heartened to know that it is believed to bring about a good year, as well as to promote prosperity, power and influence – and to ward off bad dreams.

Though it can come in a variety of colours, including purple, yellow, green or pink, September’s arresting sapphire stone is best known for its vivid blue to violet colour. A corundum mineral, it is thought to help romance, while protecting from harm, envy and temptation. It is also said to bring wisdom, faith and power to the wearer. Durable as well as beautiful, September-born folk (Virgos until 20th; Libra thereafter) may choose to wear their sapphires in traditional jewellery or on electronics, such as watches.

Another dual gemstone month, October’s stones come in the form of opal and tourmaline.
Opal is formed from silica-rich waters and derives its name from the Sanskrit word, ‘upala’, meaning ‘precious stone’. Opal is believed to aid eye-related problems and, more generally, promote a healthy immune system, whilst engendering hope and good fortune in its wearer. Tourmaline, meanwhile, is a semi-precious stone that comes in a variety of colours and is thought to be good for protection, reconciliation, grounding and keeping a cool head. Librans until the 20th and Scorpios thereafter thus have a choice of two beautiful and meaningful stones.

Those born in November (Scorpios until 20th; Sagittarians after that) also have a choice of gemstones, this time in the form of topaz and citrine. Topaz is typically colourless, yellow, or pale blue and is said to promote truth, forgiveness, generosity, abundance and good health, helping to release tension and encourage relaxation. Citrine, meanwhile, is the mineral class of quartz, its yellow hues ranging from pale to deeper shades of amber. Said to bring joy, prosperity and energy to its wearer, what greater gift (whether to yourself or others) could there be than that?

As the last birthstone in the calendar, it makes sense that there should be a trio of beauties for the final flourish. Those born in December (Sagittarians until the 20th; Capricorns thereafter) may take their pick from tanzanite, turquoise and zircon, all of which are blue in colour. It is believed that tanzanites have the power to transform negative thoughts and energies into positive ones; the more vivid turquoise is said to bring calmness and serenity while warding off negative energy; and the often translucent zircon is thought to promote happiness, prosperity, chastity, positive energy, honour, purity, and spiritual protection.

The stellar creator of dazzlingly fine jewellery, interiors and the rock’n’roll Hotlips label, gives us a whistle stop tour around her life online.

The world's first certified diamond producer with zero emissions, a fine jewellery brand with innovation, craftsmanship, and sustainability at the core.

The award-winning jeweller shows us around her dazzling digital world. 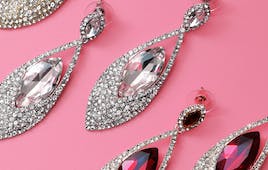 Jewellery We Love Under £300 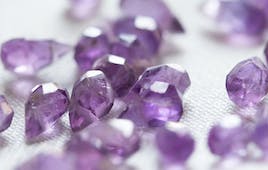 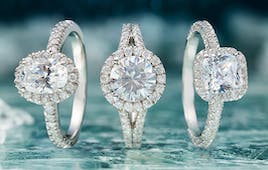 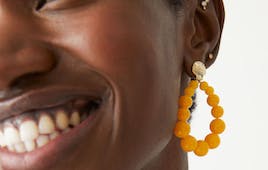 Rainbow Bright: 29 Pairs Of Jewel-Hued Earrings To Set Off A Tan