Ellie Davies is a supremely talented artist. Of course that’s subjective – one man’s meat is another man’s poison, but in my humble opinion – the physical reaction that I experience on viewing her haunting elegiac images, is evidence enough that her work reaches places that other artists just don’t go.

But I’m not here to debate the merits of Davies’s work; what I’m interested in is the life of an artist in a new millennia; a life dominated by digital media, a paradigm shift evident in the art world just as the printing press changed the literary landscape all those years ago. I’ve chosen Davies because her work is beautiful, harrowing, symbolic, but also because she embodies this transition perfectly. 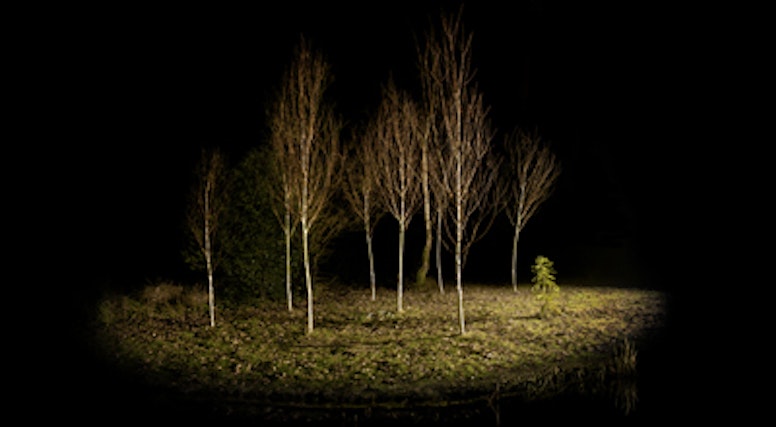 Davies has two heads; photographer first, businesswoman second; an artist who has experienced significant success over the last few years through the power of self-promotion. ‘The internet is completely vital when I work,’ she says. ‘Most of the promotion I do for myself is online. Very rarely now I actually take my work to see people in print form.’

Never is this gift more evident in the way she secured her latest show entitled Into The Woods at esteemed photographer Richard Young’s Gallery in Kensington; ‘I just e-mailed him and said: ‘I just emailed the gallery and said "Your Gallery sounds great. Can I come in and show you my work?" Then I went in, we had a meeting and we booked this show.’

In the last few years Davies’ career has gone through a stratospheric ascent – with five solo shows last year alone; ‘I just feel really lucky, that I’m able to make the work that I make and not have to respond to somebody else’s brief’. Her dedication and dogged persistence resulted in her winning a number of high profile photography competitions; ‘Most are judged by curators, so you want to get your work in front of them.’

In this day and age social media is another important facet – no more garret dwelling for the modern artist - Davies agrees; ‘I have a Facebook page and a Twitter.’ This level of interaction with galleries, collectors and fans worldwide has in no small way contributed to Davies’ ascent; ‘I have a stat account for my website and people from all over the world look at my site. I’m just astounded,’ she says. She is careful however to control how much of herself she allows into the public domain; ‘I only have low-res images online, and I don’t take photographs of myself or put any really personal information up.’ 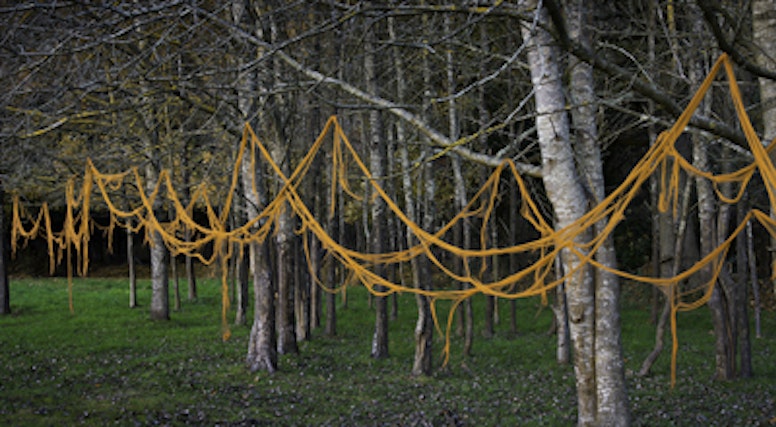 This subtle presence chimes merrily with the artist’s persona; softly spoken, feminine, there’s something of the whimsical fairy tale character about her, something that chimes merrily with the themes of her work; perhaps why she feels so drawn to the woodlands that so often feature; ‘They’re about my relationship with the environment: how it makes me feel in terms of the atmosphere and what you bring to it.’

As Davies speaks I get a sense of paradox – between her youthful energy and the dark brooding images of her work; the strength they exude, and further the strength of character it takes to live and thrive as an artist. More than this I’m fascinated by her methods – large chunks of time spent isolated and alone (in the dark no less) waiting for the right image to strike. How on earth does she cope? ‘Quite often I drive my van into the woods and I park quite close to where I’m working. That’s my point of security. I can jump into it and I can make a cup of tea.’

From the mundane then to the magical; ‘People often ask how I’ve made some of my work, but I prefer not to explain it too much because there’s a kind of mystique, and you want people to allow their imagination to take them wherever they want it to.’ 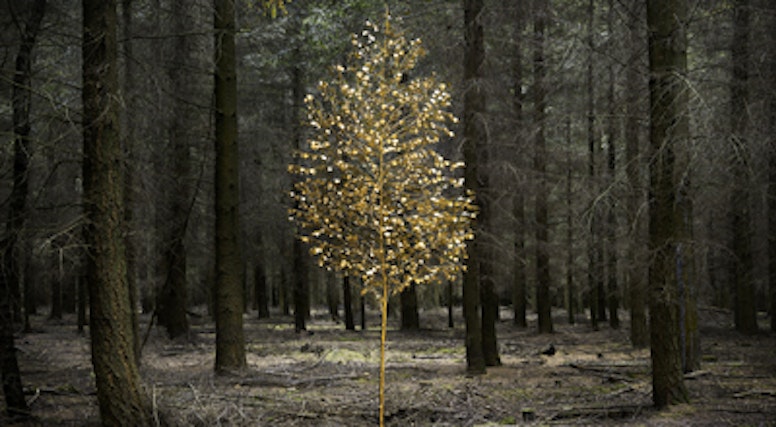 The process unfolds without Davies interference; ‘I won’t know that I’m going to make, but somehow the shape will evolve based on what’s available. It’s like playing - just this brilliant day in the woods. I feel very lucky to be able to do that for a job.’

A job not only tempered with the challenges of a creative, highly competitive industry but the demands of being a new mother; ‘I’m glad to find that I’m still able to work,’ she laughs, ‘I was worried that my creativity was going to go out the window, but actually it’s okay - it just takes it to a different dimension.’

I wonder if there’s a correlation between the series of photographs entitled The Dwellings with their overtones of life, birth and death and the experience of pregnancy? ‘I didn’t make any connections. For me, they’re really adult,’ she says. ‘One of the main principles was to make them and then come back to do different photographs when they’d been in the woods on their own. They stop being mine and become something other.’ 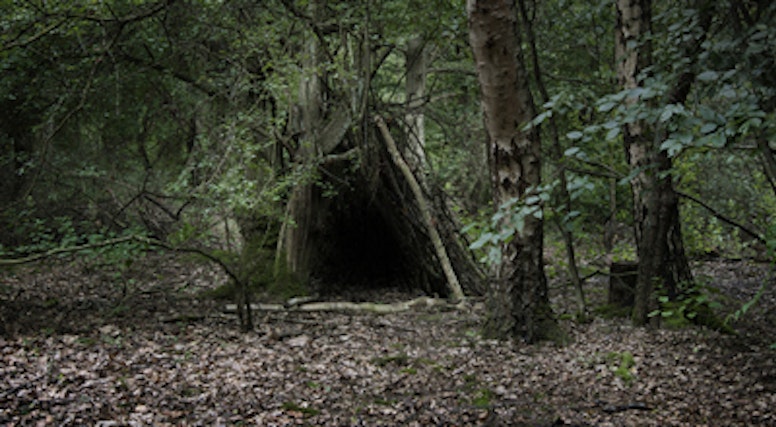 Davies is careful never to alter the environment however; ‘It’s really important that I don’t make an impact.’ So too is she careful not to let her work become affected by the work of other artists (a feat in itself with a whole legion of online galleries cropping up across the web); ‘There’s this kind of collective consciousness, and it’s so weird how you’ll have an idea, and before you’ve made it you find that somebody else has already done it.’

So we’ve come full circle - back to technology; just as Davies balances creativity with her more practical side so too does she balance digital media with more traditional forms. ‘When people see the photos online, they often say: “You did that in Photoshop”. But seeing them this big (she points towards her huge portfolio of prints) ‘it’s apparent that I’ve actually taken them, and it’s really important that they have that kind of realness about them.’

As a parting gift to other artists (struggling ones perhaps) – does Davies have any advice? ‘Every day I do something to promote myself. You’ve always got to do something,’ she says. ‘I’ve streamlined my way of working. I now have an art database; direct mail, my mailing list, so if I need to send an invitation to that exhibition I’ve got coming up, It’s a really quick thing.’ 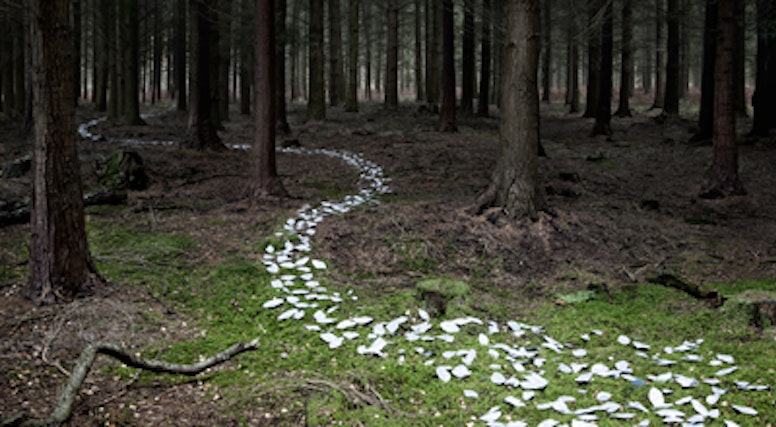 There it is – the practical side of her character – perhaps why she has succeeded where so many others have failed. I wonder where this side to her character originated? Certainly not from the whimsical grandmother whom she cites as her inspiration; ‘She used to paint enormous canvases, in long stretches,’ Davies smiles, ‘and she’d have a paint brush at the end of a big piece of bamboo – she was lovely and a very inspirational woman,’ soft, feminine – a tiny bit eccentric; much it seems like Davies herself; wife, mother, multi-tasker – a thriving artist if ever there was one.

Into The Woods opens at The Richard Young Gallery on the 5th of October and runs until the 17th of November. 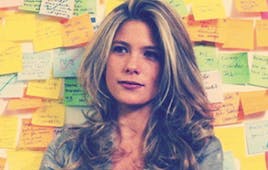 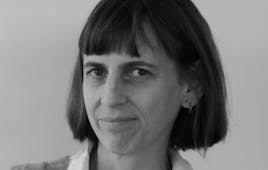 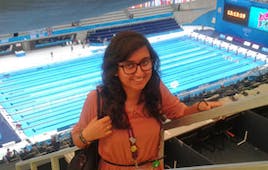 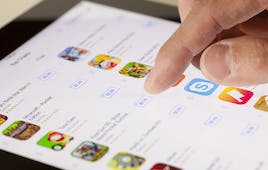 Ella Williamson on The Sunday Times List of 500 Favourite Apps