After endearing himself to generations, now to much fanfare, it's movie time.

In 1956 BBC cameraman Michael Bond buys a toy bear at Selfridges for his wife Brenda and names the bear Paddington after the station close to their home. Two years later, the book “A Bear Called Paddngton” comes out, illustrated by Peggy Fortnum.

The story features a young Peruvian bear passionate about everything British that travels to London searching for a home and finds himself lost at Paddington Station. He then meets the Brown family that offer him a place to stay after reading the label around his neck, “'Please look after this bear. Thank you”.

After being the subject of a number of books and TV episodes, now to much fanfare Paddington Bear became a movie for the first time. Starring Nicole Kidman, Ben Whishaw (as Paddington’s voice) and Hugh Bonneville amongst the others, “Paddington Bear – The Movie” comes out next week. 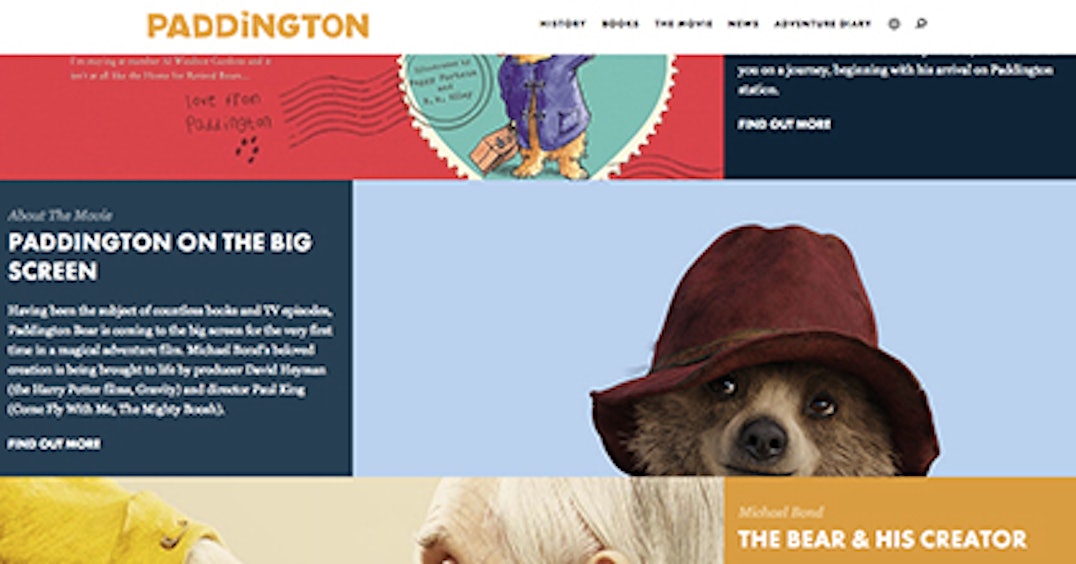 First place to start if you want to know more, it’s the impressive official website. It offers a timeline of events, exclusive movie set photos, an Adventure Diary featuring what everyone is saying about Paddington on social media worldwide and much information on Michael Bond’s books. 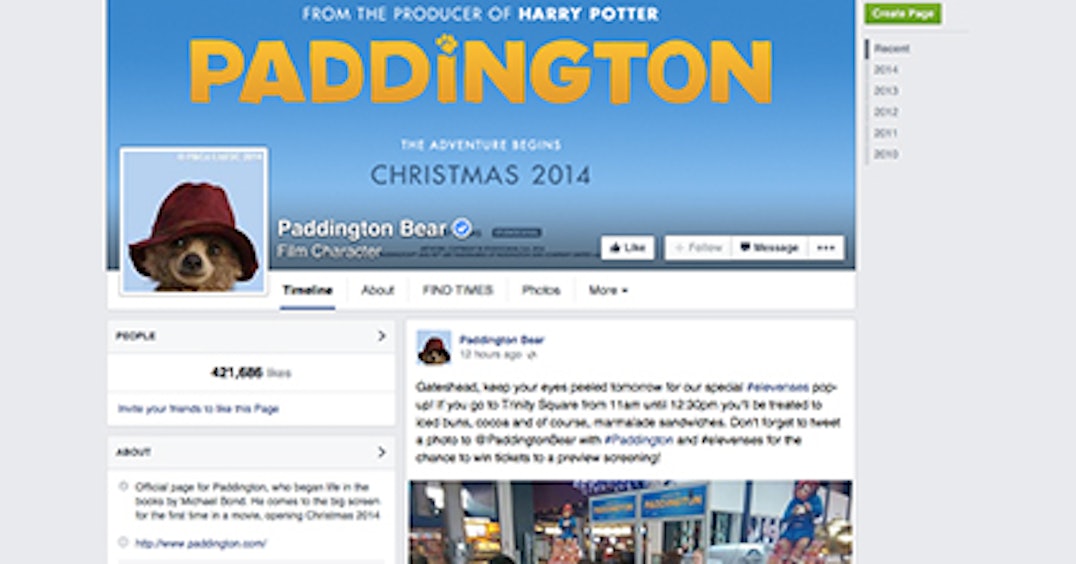 Paddington clearly has his own Facebook page, with more than 420,000 likes. The account offers all sort of insights and many foreign editions, because Paddington is truly a global phenomenon. 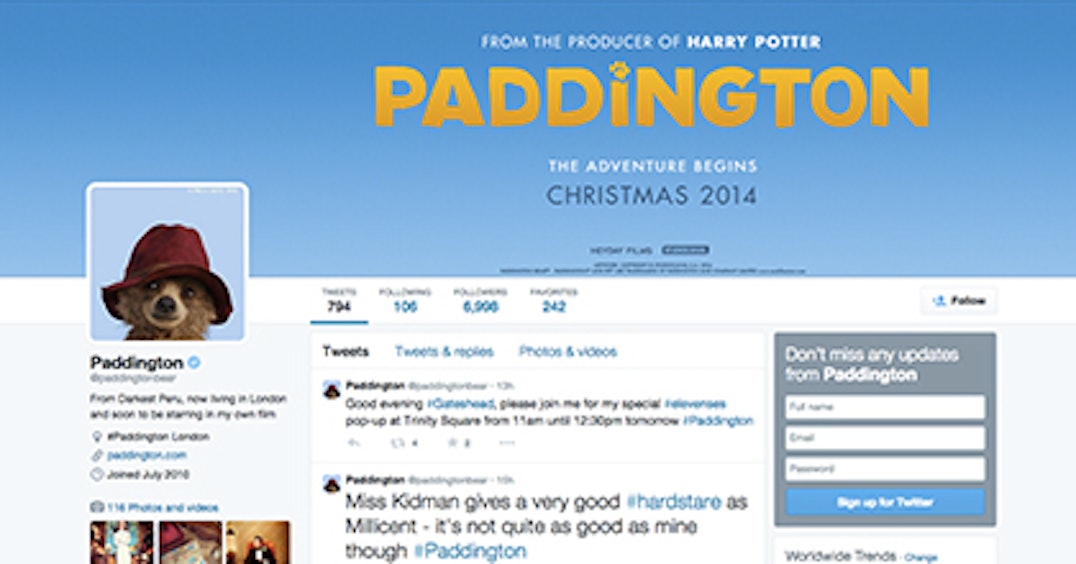 Ditto for his Twitter account, where Paddington, followed by 7,000 followers, shares his adventures and what’s happening behind the scenes, encouraging tweeters to share their own views while waiting for the movie release.

Take a look at the Official International Trailer of the movie, featuring an all-star cast and effects courtesy of award-winning VFX company Framestore.
Adapted from Michael Bond’s beloved books, Paddington follows the comic misadventures of a polite young bear with an endearing talent for comic chaos. 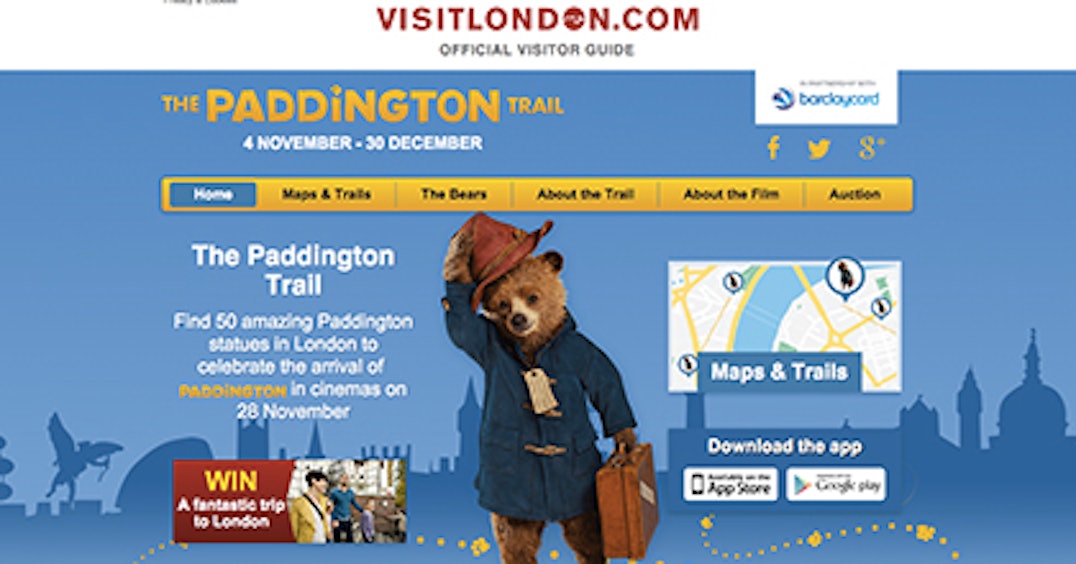 50 Paddington statues have been placed all around London to celebrate his first time on the big screen. From 4 November to 30 December you can find the statues created by celebrities, artists and designers close to museums, parks, shops and key landmarks in an inspiring trail that follows Paddington’s favourite places in London. 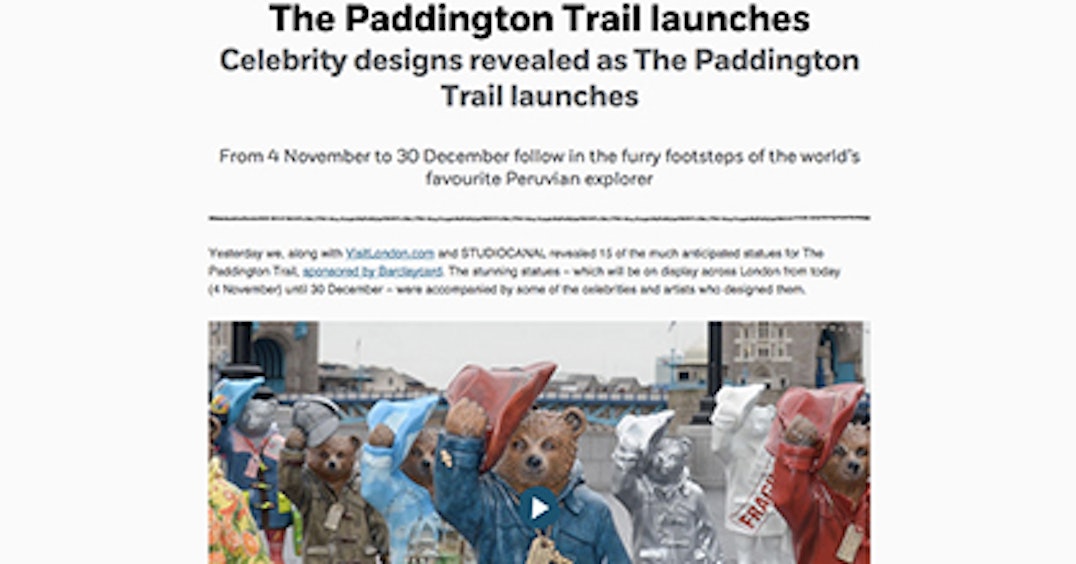 Paddington statues placed across London have been designed by a number of celebrities, including David Beckham, Emma Watson, Kate Moss, Sandra Bullock, Benedict Cumberbatch, Lulu Guinness and the Mayor of London Boris Johnson amongst the others. The statues will be on public display until 30 December, and auctioned online by Christie’s from 10 December to raise vital funds for the NSPCC ChildLine service, that offers help, advice and support, ensuring that children and young people have someone to turn to in times of need – in the same way as Mr and Mrs Brown were there for Paddington. 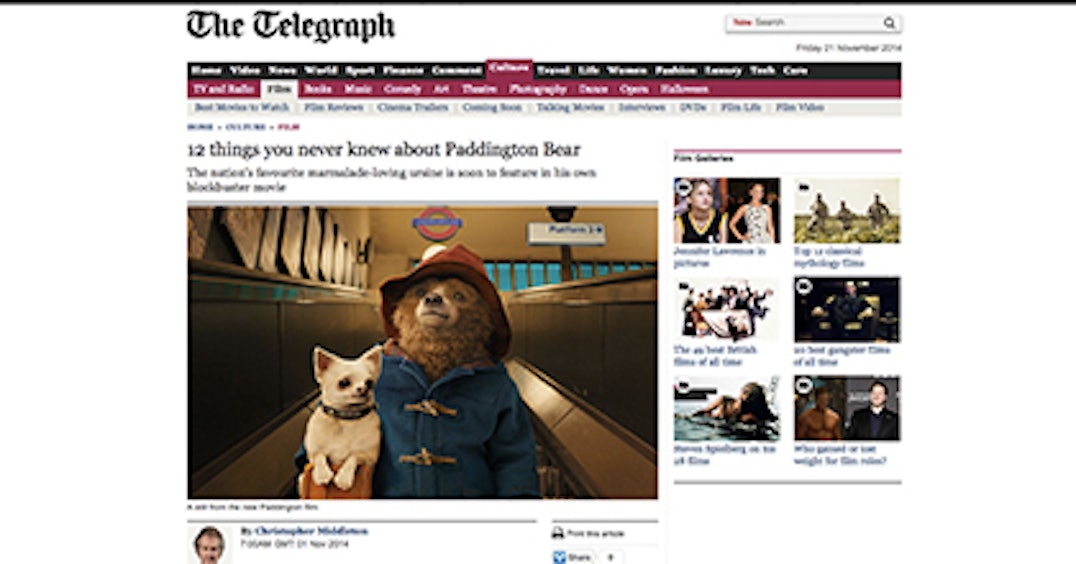 Christopher Middleton collects twelve amusing and little-know facts about Paddington Bear, such as his two birthdays, the name he had back in Peru and the fact that in 1994 a Paddington Bear soft toy was the first thing chosen by British tunnellers to pass through to the French when the two sides of the Channel Tunnel were linked up. 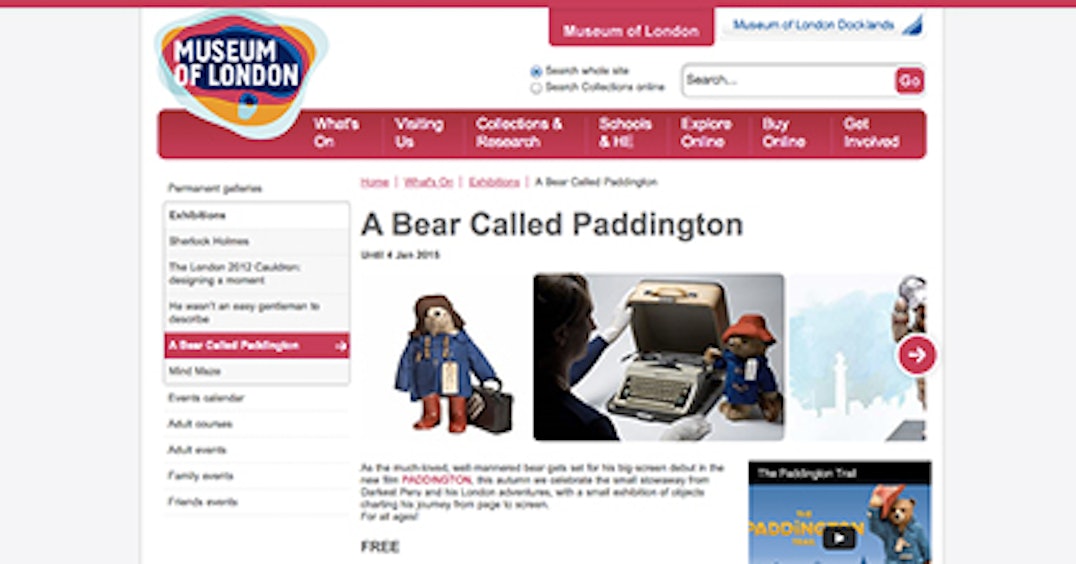 Until 4 January 2015, the Museum of London features an exhibition dedicated to the beloved bear. The exhibition features a number of objects charting his journey from page to screen. Kids aged 0-11 have free access.

HOLIDAYS TO PERU
Paddington came to London from Peru, and we’re wondering how many are now thinking about making the opposite route, at least for a nice vacation… Peru is a wonderful country, but if you want to enjoy it at its best you should entrust someone reliable to organise your trip. 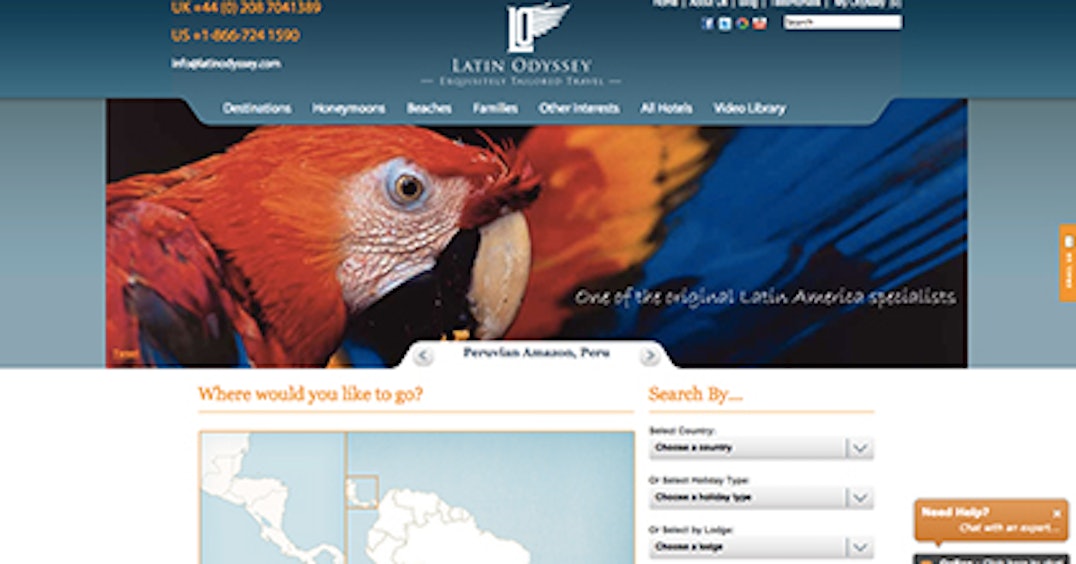 Latin Odyssey are specialists in luxury tailor-made travel for those who want to explore South and Central America in style. Each client will have their holiday itinerary handcrafted to suit their needs and interests. You won't have to worry about the little details of your holiday as Latin Odyssey will organise everything for you. You will be given a personal travel pack containing all the necessary key information, the local guides are always on hand and they will even reconfirm all your flights for you. A holiday in every sense of the word. 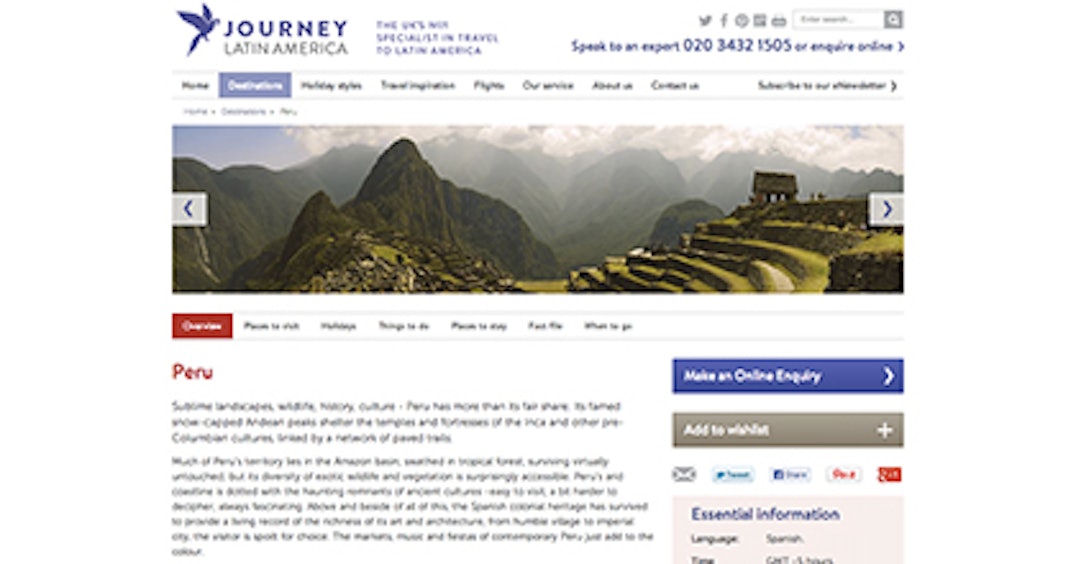 Journey Latin America are the experts in travel to this beautiful and vibrant part of the world. Founded over 25 years ago by two school teachers, Chris Parrott and Brian Williams, who shared a passion for Latin America and hit on a ground-breaking idea - to organise economy group holidays to their favourite continent. The two-man, one-telephone outfit of the eighties is now a thriving - but still completely independent - a company whose 80 specialist staff offer a full range of travel services, exclusively to Latin America.

MARMALADE RECIPES
Paddington’s love for marmalade has become one of his most distinguished character. He claims, "I came all the way in a lifeboat, and ate marmalade. Bears like marmalade." 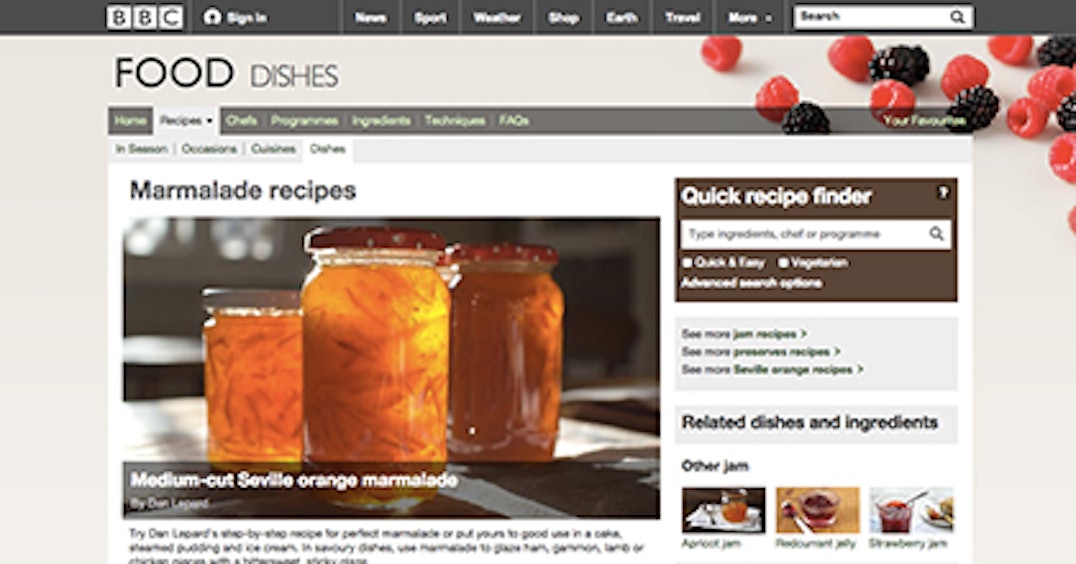 The BBC offers within its food channel a broad selection of marmalade’s recipes, to please every palate. We’re quite confident even the pickiest would find a favourite here. 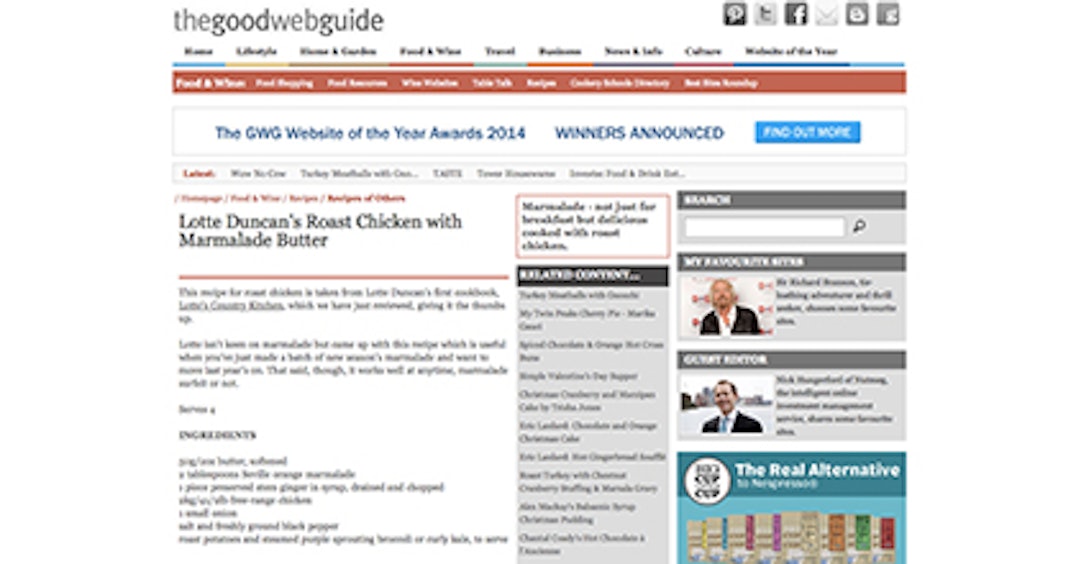 We've got a good recipe for marmalade chicken here on the GWG too; this recipe for roast chicken is taken from Lotte Duncan's first cookbook, Lotte's Country Kitchen, which we have reviewed, giving it the thumbs up. 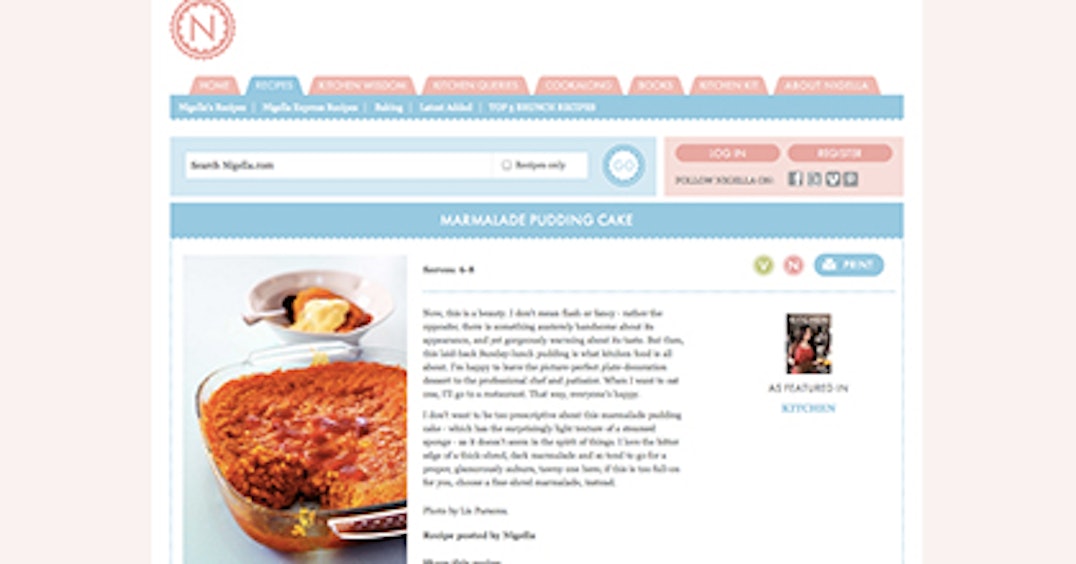 Last but not least, here you’ll find Nigella’s recipe for a marmalade pudding cake, perfect for a Sunday lunch. Trust us: you should try it even if not a keen marmalade fan, you won’t be disappointed. 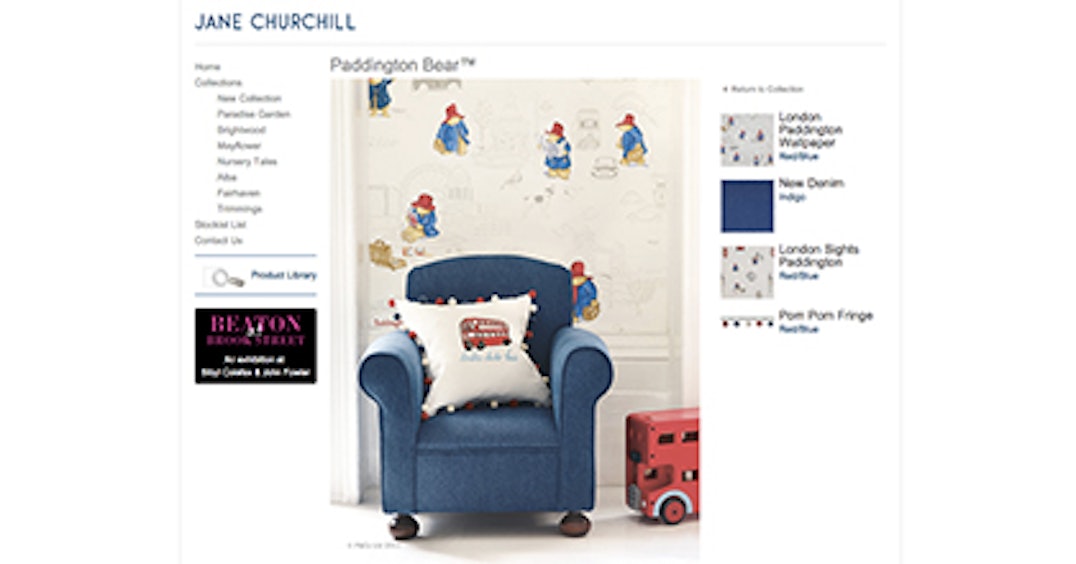 We close our selection of resources dedicated to Paddington Bear with something that shouldn’t be missed by anyone who has a kid at home. This wonderful wallpaper is perfect for toddlers, featuring delicate designs on pastel background.